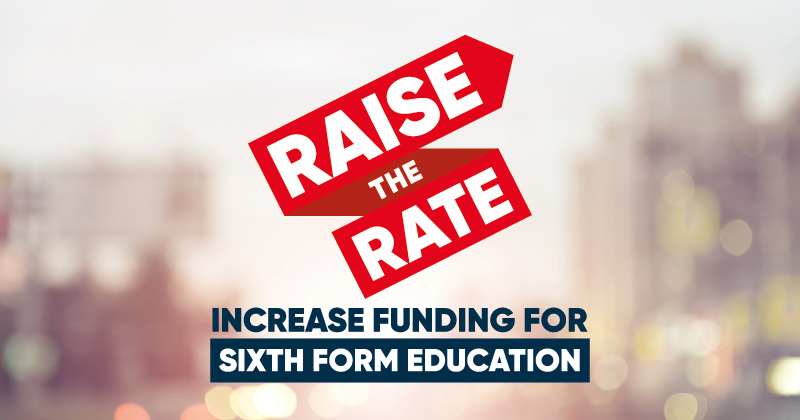 Twelve school and college associations have written to the chancellor to urge him to increase funding for sixth form education by an initial £200 per student in next week’s budget.

The letter marks the launch of the ‘Raise the Rate’ campaign, calling for an increase to the base rate for all 16-18-year-old students, which has been cut twice since 2010 and frozen at £4,000 per student, per year since 2013.

The ‘Raise the Rate’ campaign, led by the Sixth Form Colleges Association, wants funding to eventually increase to £4,760 per student in the next spending review. For 16 and 17-year-olds, this would be a rise of 14 per cent on the current £4,000 base rate. For 18-year-olds – taking a third year of sixth form – it would be a jump of 44 per cent.

A report from the Institute of Fiscal Studies last month found government funding for 16-to 18-year-olds has been cut “much more sharply” than funding for pupils in pre-school, primary, secondary or higher education.

Schools minister Nick Gibb also admitted in January last year that sixth forms were facing “tight” resources. “I recognise that there is more to do to continue improving our post-16 education system,” he said at the time.

The letter sent to chancellor Philip Hammond today claims that a combination of funding cuts and cost increases have left colleges stretched, at a time when “the needs of young people have become increasingly complex”, with more students reporting that they are experiencing mental health problems, for example.

The associations pointed to research from policy and economics consultancy London Economics, commissioned by the Sixth Form Colleges Association, which found an increase in funding of “at least £760 per student” is required to continue providing “a high quality education to young people”.

The letter also requested that this figure is then increased in line with inflation each year.

“Only a significant increase in the national funding rate for 16-to-18-year-olds will make it possible for the government to meet its objectives for a strong post-Brexit economy and a socially mobile, highly educated workforce,” the associations said.

They claim the money is needed to boost student support services to the minimum required level; support minority subjects, such as languages, that are at risk of being dropped; and increase extra-curricular activities, work experience opportunities and university visits.

As major funding decisions are not likely to be taken until next year’s spending review, and would not take effect until 2020-21, the letter also requested that the chancellor introduce a “modest increase” to the funding rate of at least £200 per student in next week’s budget.

This would “provide some much needed financial stability and ensure that schools and colleges can continue to deliver the high class education our young people deserve”.

The budget will take place on October 29.

“Sixth form education is not just about exam results, it includes a host of essential wrap-around experiences,” said Bill Watkin, the chief executive of the SFCA.

“If we don’t fund it properly, something must give and young people won’t get the high-quality education they deserve. Every year, colleges are being asked to do more with less, and we must not sit idly by while young people are short-changed.”

The twelve associations supporting the campaign are:

Association of School and College Leaders