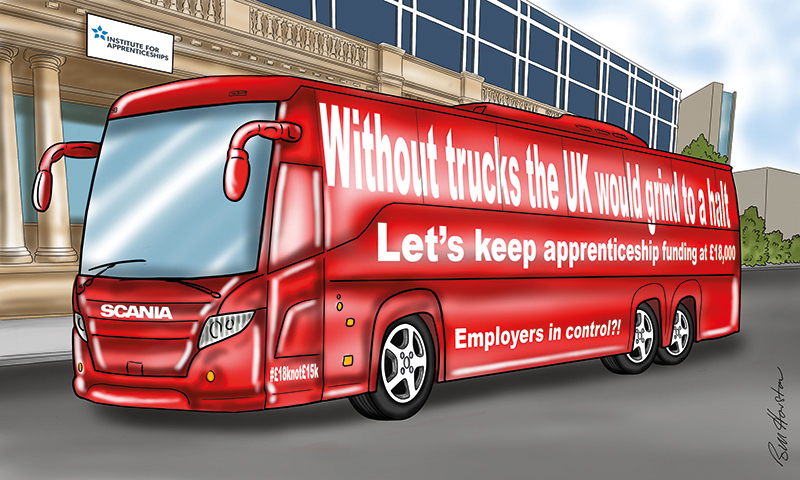 A leading manufacturer of heavy trucks and buses has warned that cutting the funding band by £3,000 for an apprenticeship that it helped to develop threatens its industry’s longterm skills strategy.

In the letter, sent to FE Week, the employer claims that reducing the £18,000 funding band for the level 3 heavy vehicle service and maintenance technician standard to £15,000 threatens the healthy flow of apprentices which “our industry’s long-term skills strategy relies upon”.

The funding band for the standard, which has had 1,171 starts since it was approved in 2016 to March 2019, has been under review by the Institute for Apprenticeships & Technical Education since December.

Although new funding bands were announced this week for ten of the 30 standards that have been under review since December, the funding for the heavy vehicle service and maintenance technician standard is one of 20 that has yet to be confirmed.

Scania, which has employed around 450 apprentices in the UK over the past three years, says they have been told by the IfA that there is an intention to cut the funding band by £3,000.

This, it says, “will have serious consequences for UK industry, society and the economy, as it will most certainly lead to fewer apprentices being taken on, thereby adding to the burden of the nation’s already considerable skills shortage”.

The letter also warns that any cut in funding is likely to cause, in many instances, a “reduction in the quality of training that apprentices receive. We therefore request your support by ensuring the funding decision is reconsidered, so that there is no reduction in funding.”

A DfE spokesperson said the reviews “identify the most appropriate funding band to support high quality delivery, and provide value for money for employers and government”.

A spokesperson for the IfA added: “The heavy vehicle service and maintenance technician standard funding band is included in the review, and a final decision has not yet been
reached.

“The employers on the trailblazer group have been consulted and are being kept fully informed on the progress.”

Anne Milton originally asked the institute to review the funding bands for 31 standards in May last year, while a further 30 were put under review in December.

The first review led to a number of popular standards, including the controversial level 6 chartered manager apprenticeship, having their funding cut by thousands of pounds.

The cuts have proven deeply unpopular with trailblazer groups of employers, which developed the standards.

This manifested itself in a surge in the number of appeals against the reviews: there were eight appeals from trailblazer groups in 2017; but in January 2018, there were more than
five times that many, at 42.

The funding band cuts, specifically the £4,000 reduction to £3,000 change for the level 2 retailer standard, have also been blamed for major retailer and employer provider Halfords scrapping its entire level 2 provision last month.

Halfords’ decision, and Scania’s letter, shines an uncomfortable spotlight on the government’s policy of putting employers in the driving seat of the apprenticeships system.

A research paper published in March by the Association of Employment and Learning Providers and the Further Education Trust for Leadership urged the government to move away from this “unhelpful” mantra after finding it was “more rhetoric than reality”.

The National Audit Office said in its apprenticeships review in the same month that lowering funding bands was one measure to control the apprenticeship budget, which the IfA
warned in December was in danger of being overspent.

However, the NAO warned such measures were “likely to be unpopular and could damage confidence in the programme”.