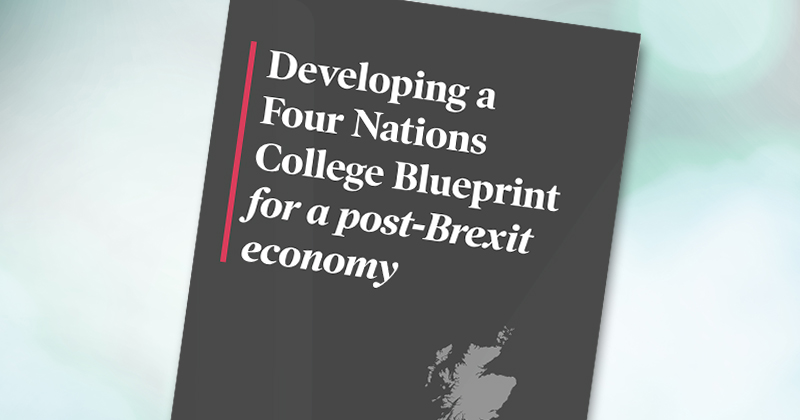 The adult education budget should be used to fully fund training at levels three to five in skills shortage areas once the UK has left the EU, the Association of Colleges has urged.

It’s one of a number of recommendations put forward in a new report, ‘Developing a Four Nations Colleges Blueprint for a post-Brexit economy’, produced by the AoC along with its counterparts in Wales, Scotland and Northern Ireland.

It calls for a “radical re-think” of skills policy and investment, based on two priorities: raising the skills “baseline” to level three, which it says is “commensurate with the needs for the future labour market”, and tackling intermediate and higher level technical skills shortages at “local and regional level through college-employer partnerships”.

To do this, it calls for a national retraining programme which would offer “fully-funded training in skills shortage occupations or retraining for skilled employees in jobs at risk at levels three to five”.

The “programme would form a relatively short-term investment to improve productivity, fill significant emerging skills gaps in priority areas”, it said, and would be funded “through a ringfence of the adult education budget.”

However, an AoC spokesperson was unable to say how much the policy would cost to introduce, or whether the association was calling for the AEB to be increased to cover it.

Instead, he said the paper was intended to “provoke debate and discussion”.

Other recommendations include a “lifelong learning entitlement”, which would be a “statutory entitlement to accredited education and training, relevant to identified labour market opportunities, to at least level three” for adults who don’t already have a qualification at that level.

Like the national retraining programme, this would be funded through ringfencing the AEB, with individuals “able to access cash, allowing them to engage with education and training at the right time for them”.

This recommendation was first put forward last September in the AoC’s policy paper on an upgraded post-18 education system, at which time AoC boss David Hughes said it would cost an estimated £1 billion a year.

“This would involve the Department for Education reversing the 17.5 per cent cut to funding at age 18 and increasing the adult education budget to replace learner loans,” the AoC said at the time.

Today’s report also calls for a “new social contract” to better fund all full- and part-time FE and HE students, and provide an “entitlement to maintenance grants up to the equivalent of the Living Wage”, as well as incentives to employers to encourage them to release employees to retrain and upskill to level three.

“Furthermore, the increasing skills gap in areas like STEM and other key sectors mean we need to focus our efforts more than ever on having a technical education system which meets the needs of all – allowing them to train and retrain throughout their careers, with colleges being central to this.”

Gordon Marsden, shadow skills minister, said the report “vindicates what we have been saying about how critical it is to use our world-class FE sector given skills challenges in the UK post Brexit”.

“Unfortunately, as we heard in parliament yesterday, successive Tory-led Governments have slashed FE budgets to the severe detriment of both students and staff. We’ve always said we need post-Brexit a UK wide skills strategy, that’s even more crucial now.”

A government-led national retraining scheme has been in development for the past 18 months, after it was promised in the Conservative party election manifesto in 2017.

However, information on the scheme – including how it will operate, who will be eligible and how much it will cost – has so far been thin on the ground.

Representatives from its two partners on the scheme, the CBI and the TUC, told MPs on the education select committee earlier this month that they were “pushing” the government to share more details.

So far £100 million has been committed to the scheme, but Iain Murray, senior policy officer at the TUC, said the actual cost of delivering it could be “billions”.