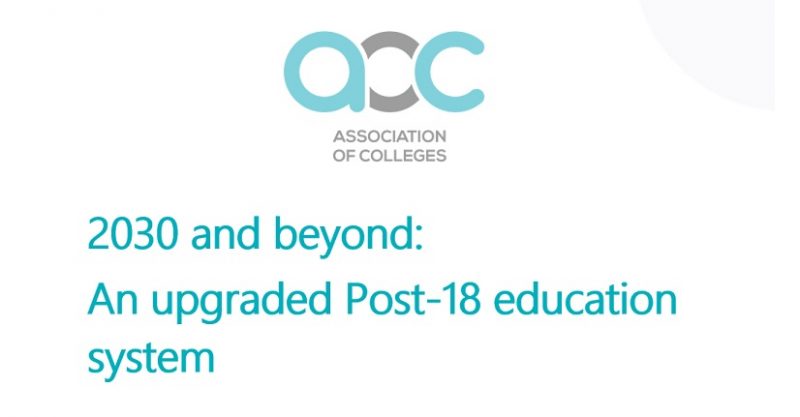 The government should fund the development of new higher level qualifications, paid for by a “higher technical levy” or top-slice from the apprenticeship levy, the Association of Colleges has said in a wide-ranging set of recommendations.

In a new policy paper called ‘2030 and beyond: An upgraded Post-18 education system’, the association calls for a major redesign of England’s higher technical route.

It says that by “common consent”, the country has “low numbers of students taking courses at levels four and five when compared to our OECD counterparts”.

In the first 10 years, a teaching grant should be introduced to reduce the loan required by the student

There is an “executive lift” taking 18 and 19-year-olds directly from level three courses to level six degrees and “very few taking courses at the levels in between”.

To combat this, a new suite of level four and five qualifications should be developed which include the introduction of “teaching grants” – where government would pay towards that level of education.

DfE would need to reform current “grant, fee and loan rules to incentivise and support new one and two-year courses at levels four and five”, the AoC said.

“The same fee cap and loan/maintenance arrangements should be made available for this route for students of all age – whether they are part or full time.

“In the first 10 years, a teaching grant should be introduced to reduce the loan required by the student.

“This might be in the region of, say, 25 to 50 per cent of the fee coming from teaching grant, with the loan available for the remainder. In addition, students should be able to access financial support for living costs, travel and childcare.”

Funding for both the development of the qualifications and the teaching grants “could come from charging a short-term higher technical levy (say 0.2 per cent),” the AoC proposed.

It added: “We assume that the current accounting rules for student loans will not last and therefore that the annual costs of the new teaching grants we propose will partly be offset by lower student loan outlays.”

AoC chief executive David Hughes told FE Week that the 0.2 per cent levy “could be on the same basis as the apprenticeship levy, in which case it would raise around £1 billion”.

The association believes that some level four and five qualifications, such as Higher Nationals and Foundation Degrees, are “well developed in some sectors (e.g. engineering and construction and hospitality) but are too often seen only as a route to a degree level course in a university rather than an end point in themselves, leading into employment”.

“They are also less well known, understood and respected than degrees by parents, schools and employers in many sectors of the economy,” it said.

The AoC’s policy paper also calls on the government to scrap the 24 age limit on free first level two and three courses.

It should introduce a “statutory entitlement – with appropriate funding – to at least level three for all adults who have not previously attained that level”, which Mr Hughes estimates  “if it increases numbers by 200,000 a year (restoring them to the pre-FE loan position), this would cost £1 billion a year”.

“This would involve the Department for Education reversing the 17.5 per cent cut to funding at age 18 and increasing the adult education budget to replace learner loans,” the AoC said.

“As with access courses, the government could write off any level three fee on completion of a higher education course.”

There would be considerable costs to implement the report’s recommendations but Mr Hughes insisted “the aim is a long-term investment in the UK population”.

“The costs need to be set against the possibility of long-term savings if there is a shift away from full-time residential higher education,” he said, adding: “These are substantial sums but no higher than proposals to restore HE maintenance grants to their pre-2016 position.”

The government has set up a panel, led by Philip Augar, to review post-18 education.

Nick Hillman, the director of the Higher Education Policy Institute, “welcomed” today’s “imaginative” report from the AoC but predicts there is “zero chance” of all the proposals being introduced.

“Demand for level four and five qualifications has withered yet employers say they need far more people trained to these levels,” he told FE Week.

“There is zero chance that all the AoC’s proposals will be implemented but the overall approach of better level four and five provision, a more flexible apprenticeship levy and a fresh look at the old teaching grant make a lot of sense.

“I hope the Post-18 Review looks at these proposals very carefully alongside all the others it is receiving.”

Shadow skills minister Gordon Marsden added: “Today’s review paper from the AoC further highlights the urgent need for post-18 reform and contains a series of practical proposals to assist students with much-needed support including for travel and maintenance grants – issues we’ve consistently challenged Government over but they have consistently ignored.”