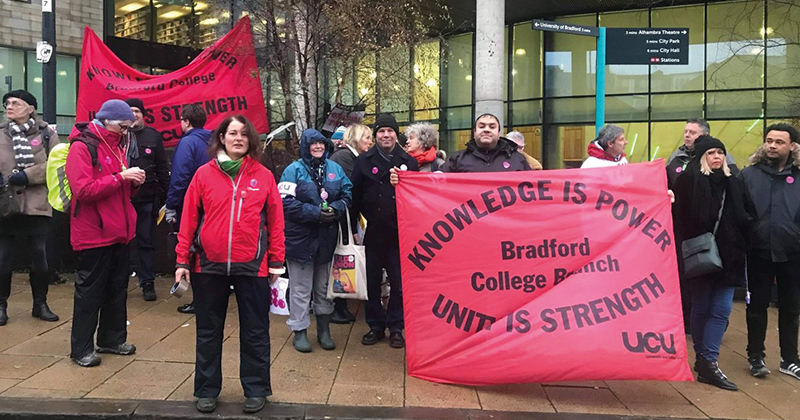 A walkout by more than 700 University and College Union members caused disruption across six colleges this week – and even forced one to close for the two days.

Bradford College shut eight of its 12 buildings and called off all its planned lessons on Wednesday and Thursday, while at least three other colleges cancelled some classes.

Further disruption could be on the horizon, as ballots opened at another 26 colleges in an ongoing dispute over this year’s pay deal.

“Despite the weather, members have been out on the picket lines explaining to their students why they have been on strike,” said Matt Waddup, the UCU’s head of policy and campaigns.

He acknowledged that the action had “meant serious disruption” but insisted the union’s members “have been left with no alternative”.

Staff are demanding a five per cent pay rise, and are angry over Association of Colleges’ offer in July for a “substantial pay package” over two years, dependent on government funding.

A spokesperson said the union had balloted around 700 members across the six colleges, and expected all of them to have walked out – although the actual numbers will be higher as new members had joined since the ballot.

Bradford College said it had “made the very difficult decision to close the college to students in order to minimise disruption and to enable students to make alternative arrangements for their learning” on November 28 and 29.

New College Swindon posted on its website that it had to “cancel a very small number of classes” on both strikes, and texted all affected learners.

The UCU said feedback it had received from both Bath College and Petroc indicated that “significant numbers” of classes had been cancelled at both colleges, and that “scores” of learners at the latter had joined staff on the picket line at lunchtime.

Wera Hobhouse, MP for Bath, gave her support to striking staff at her local college ahead of the walkout.

“Further education needs proper funding, and the staff who work in this vital area should be properly paid. I fully support UCU members taking industrial action in Bath,” she said.

However, a notice on Bath College’s website, published November 22, said it expected the “majority of teaching and learning activity to proceed as usual”.

“Whilst we are disappointed that some staff are striking, we understand the reasons why,” the notice said.

A spokesperson for Petroc told FE Week there had been “minimal disruption” and “where there has been we have put alternatives in place”.

Neither Lambeth College nor Croydon College responded to FE Week ahead of publication.

Ballots on possible action at a further 26 colleges opened on Wednesday and are set to close on December 19.

Mr Waddup said the results from those colleges “will be back before Christmas and we hope that will focus college leaders’ minds”.

“If they refuse to act then we will be looking at further waves of strikes with more colleges in the new year,” he said.

This week’s action follows a “landmark” deal agreed between the UCU and Capital City College Group last week, which will see staff receive up to a five per cent pay rise.

But, as previously reported by FE Week, the deal will cost the group more than £3 million, and will turn a projected break-even budget for the year into a £2.3 million deficit.

The AoC held its first-ever week of action last month to “make a lot more noise” about the funding issues affecting the sector – including pay.

The Love Our Colleges week was prompted by the Department for Education’s decision to fund a 3.5 per cent pay rise for school teachers while ignoring college lecturers.