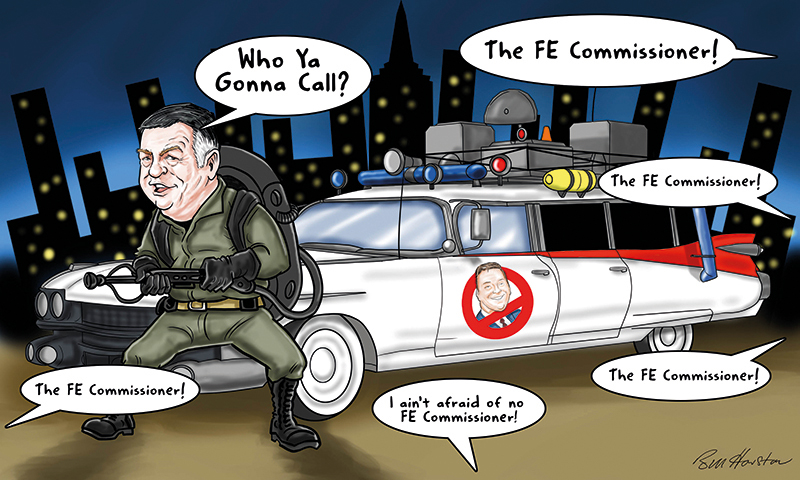 The FE commissioner has urged college governors to check with him before appointing a principal as part of a crackdown on “serial offenders” ahead of the incoming college insolvency regime.

Richard Atkins was speaking exclusively to FE Week in the same week he was reappointed to the role for another two years.

“I would encourage every single chair or clerk on their behalf, before they interview their final shortlist, to do due diligence with others in the sector – the Association of Colleges, the Education and Skills Funding Agency, my office,” he said.

“You need to be extremely careful because the appointment is so critical to the future success of the college. And the sector is small enough for people to be aware.”

While he said “I don’t believe in witch hunts”, Mr Atkins warned that “we do as a sector need to guard against a very small number of people either getting let go or jumping ship and then turning up somewhere else and then adopting the same behaviours that caused the trouble before”.

Mr Atkins’ remarks follow the resignation earlier this month of Garry Phillips from City College Plymouth, less than two weeks after the publication of an FE commissioner report into his previous college, Ealing, Hammersmith and West London College, that was deeply critical of his leadership.

Mr Phillips faced anger from members of the University and College Union at Plymouth, who returned a vote of no confidence in his leadership and in the governing body’s decision to hire him.

His resignation was one of a spate of departures by senior leaders in the sector, many of whom – but not all – had been working at colleges that Mr Atkins and his team are involved with.

Following a “pretty good year” in 2017/18, this year got off to a less positive start for the FE commissioner with a number of high-profile interventions – including West Nottinghamshire College and EHWLC.

One of the “big causes” in many of these cases was the incoming insolvency regime, which Mr Atkins described as a “game changer” that had “brought several of these cases to a head more quickly than would have happened in the past”.

The regime, which will allow colleges to go bust for the first time, will come into effect at the end of January. Exceptional financial support will be withdrawn from the end of March, at the same time as the deadline for spending cash from the restructuring facility.

While there is likely to be “some money to support colleges that have become insolvent to get back on their feet in some way”, it is likely to be a “much smaller amount of money” than is available at the moment, Mr Atkins said.

“Colleges now face the most rigorous challenge if they suddenly or unexpectedly run out of money,” he said.

In those cases “there is a very focused conversation with the governors and leaders of those institutions about how we return the college to sound financial health” and “that is a really serious conversation because potentially on the April 1 or 2 those colleges will become insolvent”.

But, he added, “I don’t necessarily see the insolvency regime leading to closures”.

“What I do see as an outcome is governors and senior staff being held to account in a more transparent and more robust way than ever before,” Mr Atkins said.

His “earnest hope” as colleges adjust to the changes is that “people ask for help sooner, they improve further their financial planning, particularly their management of cash, which is critical, and that governors and leaders stay right on top of that”.

“Cash really is king in incorporated colleges, and you really can’t afford to run out at short notice,” he said.

That’s what happened to West Nottinghamshire College, which hit the headlines in September after it emerged it asked for a bailout just 48 hours before it would have run out of cash.

Mr Atkins stressed the importance of colleges having at least two financially qualified governors on their board to both challenge and support the principal and finance director.

On a “number of occasions” he and his team had intervened at colleges without any, which he said he found “genuinely staggering in 2018”.

Mr Atkins wouldn’t be drawn on whether any colleges were at immediate risk of going bust.

“I think there are a small number of colleges, a very small number, who still find it difficult to take advice or ask for help,” he said in response to the question.

He acknowledge that there will be “a small number” of failures, but he hoped to “keep that to the absolute minimum”.

“I do think there will be a small number of colleges who battled through area review to remain standalone, who will do anything rather than have a discussion about what might be in the long-term best interests of that institutions, and therefore one or two of those might fail,” he said.

He urged leaders to “realistically assess” and come forward to ask for help if necessary as “there’s no shame in that”.

Mr Atkins said there were a few college leaders “who are in denial, who underestimate how close to the edge they are”.

“I would genuinely like to visit or help those colleges come to terms with a sustainable future for their learners,” he said.