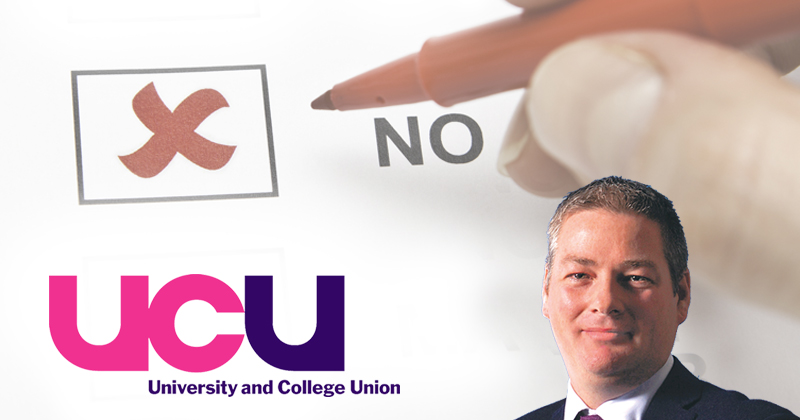 The University and College Union has demanded that ministers “step in and deal with the debacle” at City College Plymouth, after 349 out of 350 members backed a vote of no confidence in their beleaguered principal.

“Anyone with any integrity would see that this vote means staff have no confidence in any decision made by the principal and his cohort,” said Philippa Davey, UCU regional official.

“People with the track records should not be in charge of what is a fantastic college,” she said.

“A teacher with such a failed record would not be given a job and the time has come for ministers to step in and deal with this debacle.”

The college, which does not have to take any action as a result of the vote, has so far refused to publicly back its beleaguered principal, despite multiple requests from FE Week by email and phone over the past week.

In addition to the vote of no confidence in Mr Phillips, over 99 per cent of those who voted said they had no confidence in the governors’ ability to make “sound and robust appointments for senior leaders at our college”.

And 100 per cent said they had no confidence in the appointment of Martin Smith, a financial consultant brought in by Mr Phillips who had previously worked with him at both EHWLC and New College Telford, to “control and manage the college’s finances”.

The union’s fury was sparked following an FE commissioner report into EHWLC, which was highly critical of Mr Phillips’ leadership.

It concluded that executive leadership had been “poor” and it “had not provided a properly considered and coherent holistic strategic direction for the college”.

Issues highlighted included a lack of an overarching estates strategy, various merger discussions described as “a distraction at best” with some having no “obvious perceived advantages”, and a failure to achieve “too optimistic” budgeted income.

The relationship between “those holding power” – the chair, clerk and principal – was said to have been “over supportive” and “cosy, with little challenge and feeling a difficulty in asking questions”, according to the report.

UCU officials wrote to Pauline Odulinski, the chair of Plymouth’s governing board, on Monday, demanding answers about his appointment – including whether the process was “safe and robust” and whether governors had the “full facts regarding his previous position”.

In her reply Ms Odulinski said the board was “confident” in the recruitment process it had followed, and continued to have confidence in Mr Phillips’ ability to lead the college.

Ms Davey said she was “absolutely stunned” by the college’s response to their letter, and described it as “totally inadequate and insulting to staff”.

Today’s no confidence vote comes as members of the FE commissioner’s team are carrying out a diagnostic assessment at the college.

An all-staff email from Mr Phillips, seen by FE Week, said the visit was prompted by the college being in early intervention for financial health by the Education and Skills Funding Agency.

The college is currently in consultation over a proposed restructure, which could see up to 70 jobs cut, according to the UCU.