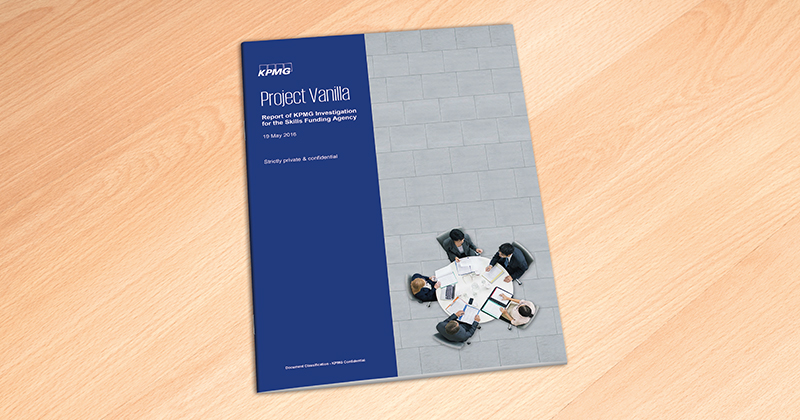 Crisis-hit Aspire Achieve Advance was given a £7 million apprenticeships contract increase two years ago despite an investigation that found dozens of funding and success rate “overclaims”, FE Week can reveal.

In recent weeks the apprenticeship giant has come under heavy scrutiny after its co-founders resigned and the Education and Skills Funding Agency suspended it from recruiting apprentices in the midst of a government investigation.

Now, FE Week has discovered that the training provider, better known as 3aaa, was subject to a separate investigation by the ESFA in 2016 – which is understood to have resulted in the company paying back a substantial six figure sum.

Auditing firm KPMG was called in following claims by a whistleblower about non-compliance with funding rules.

‘Project vanilla’, as it was code named, was treated with “high confidentiality” and is only known by a select few people at 3aaa and the Department for Education.

The report has now been leaked to FE Week (read it in full here).

The whistleblower claims included: incorrect start dates resulting in failure to reach minimum duration; incorrect use of “break in learning” status which is inflating success rates; apprentices with long periods without learning activity.

The probe found dozens of “errors which support the allegations or which have an impact on funding of success rates”.

All monthly payments to 3aaa were stopped during the investigation, but resumed when it was concluded, at which point the provider was then rewarded with a £7 million increase to its in-year allocation.

“Clearly 3aaa was allowed to expand their apprenticeship provision very quickly and the funding investigation in 2016 raises significant questions,” he said.

“Apparently a further £7 million was passed over to 3aaa after the investigation highlighted concerns.

“In light of the Learndirect ‘too big to fail’ debacle, this raises further questions whether too much money is going to larger providers.

“I will be calling for reassurances that the DfE/ESFA acts swiftly and in the interest of protecting public funds and particularly in safeguarding apprentices.”

KPMG “primarily” held discussions with 3aaa owners Peter Marples and Di McEvoy-Robinson as well as the provider’s resources director at the time, Lee Marples, during the investigation.

They sampled 663 apprentice records. The findings included apprentices not completing their minimum duration of 366 days; recorded as being on a “break in learning” when they should have been withdrawn; and where there was no evidence of learning for more than six months.

Instances were also found where “documents such as individual learning plans, enrolment/applications forms, and apprenticeship and learning agreements were incomplete”, including dates and signatures missing. Investigators also found some documents, “mainly the enrolment forms”, were missing from the learner files and for 87 apprentices their signature was dated an average of 108 days after the start date in the data.

The investigation report also detailed where the “provider confirmed that funding had been over-claimed”, such as for recording withdrawals in the wrong period and for functional skills qualifications that had been “deleted” from the data “as the provider was informed that the learner was no longer required to complete these learning aims”.

The report states that the ESFA should consider the “funding and success rate impact”.

The investigation report does not quantify the value of any over or under-claims, but FE Week understands 3aaa had a substantial six figure sum deducted from subsequent payments.

“We have not identified any evidence of deliberate circumvention of funding rules by the provider,” the investigators said.

A spokesperson for 3aaa said the provider could not comment on the report, due to confidentiality agreements.

The DfE said: “We do not comment on any investigations, ongoing or otherwise.”

The ESFA’s current investigation into 3aaa was sparked earlier this year when a whistleblower approached the agency with new claims about its business.

Owing to this, Ofsted declared its latest inspection of the provider, which was expected to result in another “outstanding” rating, as incomplete in June.

Mr Marples and Ms McEvoy-Robinson, who set up 3aaa in 2008, resigned from their roles as the company’s chief executive and main director respectively last week.

The provider was then suspended from recruiting apprentices, but FE Week later revealed that senior employees had been “instructed” to tell its staff to not date any paperwork for “planned enrolments”.