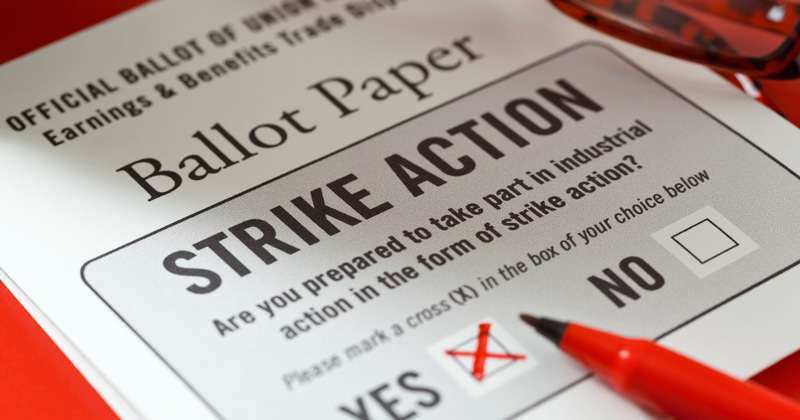 The University and College Union has begun balloting its members for strike action, after colleges failed to meet their demands over this year’s pay claim.

College staff were left bitterly disappointed in July when the AoC said it was unable to recommend a salary increase of five per cent, and was instead only able to propose a “substantial pay package” over two years dependent on government funding.

The UCU described the proposal as “bizarre” and warned that an immediate solution was needed if colleges wanted to avoid strikes in the autumn.

No such action has been forthcoming and the government has outright refused to provide the funds needed to increase staff pay – even though it was able to increase school teacher pay by 3.5 per cent.

“Our pay ballot opens this week because staff are fed up with excuses from colleges and government to hold down their pay,” said a UCU spokesperson today.

“Colleges would have been foolish to rely solely on a plea to government to meet staff pay expectations and must now find the money from elsewhere.”

He added that it is “disappointing” that the government is refusing to back FE and its staff by providing extra funds for a “deserved” pay increase.

“We will continue to work with the sector to lobby for fairer funding,” the spokesperson said.

“However, this does not let colleges off the hook when it comes to staff pay.”

The ballot closes on October 19 and industrial action, if voted for, is likely to take place later that month.

Responding to the ballots, AoC boss David Hughes said: “This confirms the risk which I have made very clear to DfE of possible actions in this academic year, with the impact that has on students, morale and confidence.”

There is a huge discrepancy between average college and school teacher pay – £30,000 compared with £37,000 respectively.

Mr Hughes told FE Week he has “every sympathy” with college staff who are not being paid as much as they think they should be paid.

“I can understand if they are angry that makes people despondent and they have the right to take strike action,” he said.

“I’d rather they didn’t have to, we need to think about the impact on students.”

But he added that in a “political world” strike action is “the only step workers believe they can take and sometimes it works”.

“I don’t think this is the last step staff can do now,” he said.

“Quite often strike action will impact directly on the students staff are committed to supporting. It can damage the student experience.”

UCU wrote to skills minister Anne Milton in July setting out the case for extra funding, claiming FE has reached “a crisis point on pay”.

Trade unions also wrote to the AoC in May to spell out exactly why they resubmitted a claim for a raise of five per cent for 2018/19.