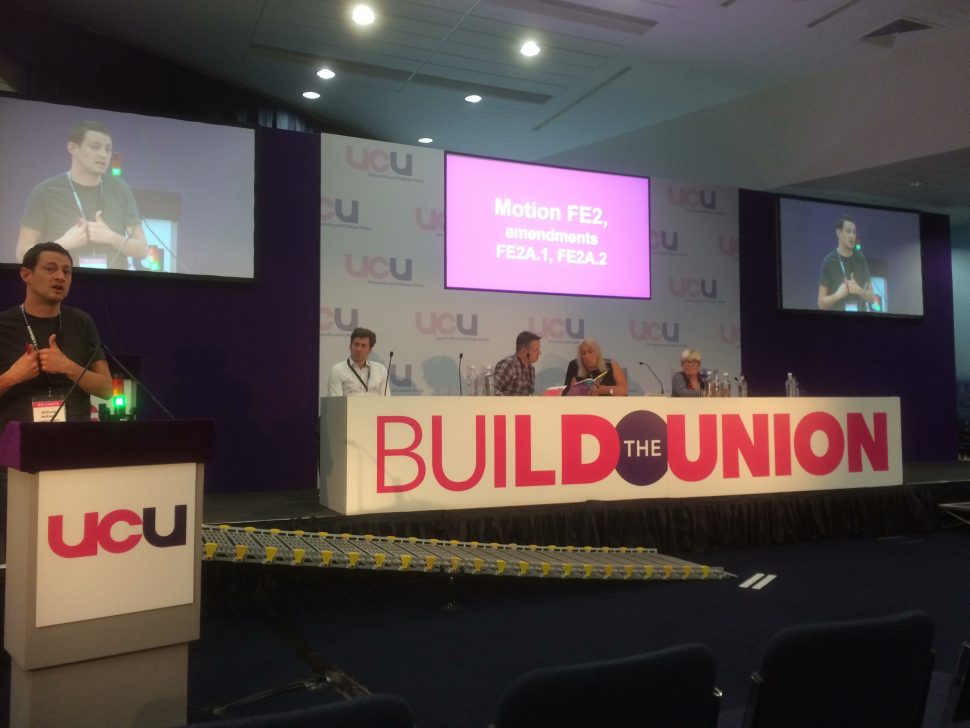 An autumn of discontent over college pay could be on the cards, after University and College Union members voted unanimously for escalating action if the Association of Colleges fails to meet their demands over next year’s claim.

The motion on action over FE pay was passed at the UCU’s 2018 Congress in Manchester this morning, just days after the Association of Colleges backed down on its previous refusal to negotiate with the unions.

The late motion on FE England pay called on the AoC to “make an early offer that meets members’ expectations for an above inflation pay rise and catch up from years of pay cuts”.

The UCU will “ballot members nationally for escalating strike action” in pursuit of its 2018/19 claim, it said.

The joint FE unions, which include Unison, Unite, GMB and the National Education Union as well as UCU, have submitted a claim for a five per cent rise or £1,500, whichever is the greater.

But, according to an action note accompanying today’s motion, the UCU believes “it is extremely unlikely that the AoC will be in a position to make an offer that is satisfactory” before the summer.

If that proves to be the case it will urge branches to negotiate locally with their colleges and to be in a “position to be in dispute and conduct successful ballots” on potential action in the autumn term.

A second motion, also passed unanimously, stated that the ongoing action by colleges over this year’s pay claim “has laid the basis for a national campaign for fair pay”.

Earlier this month the AoC told the unions it wouldn’t open negotiations on the 2018/19 pay claim while disputes about the 2017/18 claim were still ongoing.

This week it backed down and agreed to accept the unions’ claim, even though five colleges still have strikes planned over the coming weeks.

That action, at Lambeth College, Lewisham Southwark College, City and Islington College, Westminster Kingsway College and the College of Haringey, Enfield and North East London, is over a one per cent rise offered by the AoC for 2017/18 – an offer described as “disappointing” by the UCU.

A three-day strike at Sandwell College was called off at the last minute the week before, after staff and leaders agreed a “sector-leading” deal worth more than six per cent over three years.

Speaking at today’s conference, Sandwell College’s representative said it was a sign of how “poor pay is in FE that the deal is being lauded as a pay victory when in reality it’s a pay cut”.

“We need to get a national pay campaign going, and not just agree local deals”, he urged.

Soaring levels of principal pay, while staff pay remained static, was another bone of contention for UCU members at the conference.

A motion calling for the union to lobby for a principal’s pay to be limited to “no more than five times the median pay of all employees” at their college also passed unanimously.

Andrew Harden, the UCU’s head of FE, told delegates that a third of principals had a pay rise of 10 per cent or more in 2017/18.

Speaking in support of the motion, Chris Jones, representative from Neath Port Talbot College, said when he started working in the sector, more than 20 years ago, principal pay was around two to three times average staff pay – and now it stands at around nine to 10 times more.

“They say they have more work and responsibility now than before, but they also more help than before,” he said.