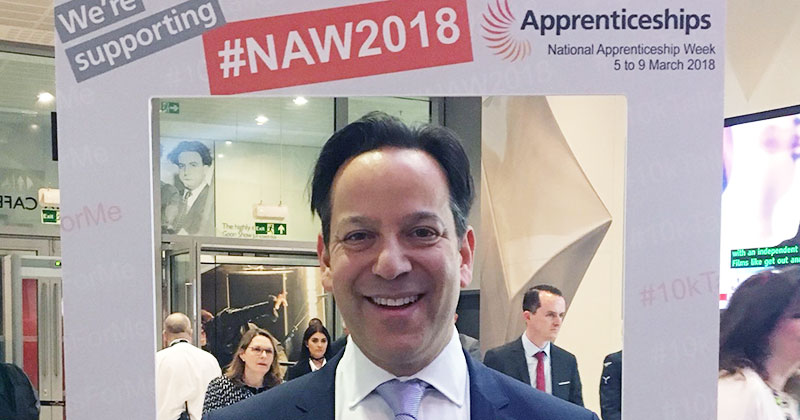 This is a promotion for Mr Holt, who had previously been the apprenticeships ambassador for small businesses.

The Association of Employment and Learning Providers was quick to tweet its congratulations.

The Apprenticeships Ambassador Network is an employer-led body which aims to encourage more companies to get involved in apprenticeships.

Mr Meller was forced to resign from his government roles earlier this year, following allegations that sexual harassment took place at a charity dinner  he co-chaired.

Skills minister Anne Milton announced in parliament on January 24 that Mr Meller was stepping down as a non-executive board member for the Department for Education and from chairing the Apprenticeship Delivery Board.

Although it wasn’t publically stated at the time, it’s clear from Mr Holt’s appointment that Mr Meller also stepped down from chairing the AAN.

Mr Holt has championed apprenticeships for small- and medium-sized businesses for many years, having authored a 2012 independent review for the government on the issue.

And in May last year he vowed to “continue to beat the drum” on apprenticeship funding for SMEs.

Sue Husband, director of the National Apprenticeship Service, said: “With his influence, his standing in the business community and his insights into how employers think, I can think of no better individual to lead the Apprenticeship Ambassador Network. Jason’s intense commitment to apprenticeships with SMEs over many, many years will unlock so many new opportunities with apprenticeships.”

Today’s announcement was made at the start of this year’s National Apprenticeship Week, during a launch event at the BBC featuring the education secretary Damian Hinds.

“Apprenticeships play a crucial role in helping people realise their potential as they learn and earn, and are providing employers with the skilled workforce our country needs,” he said.