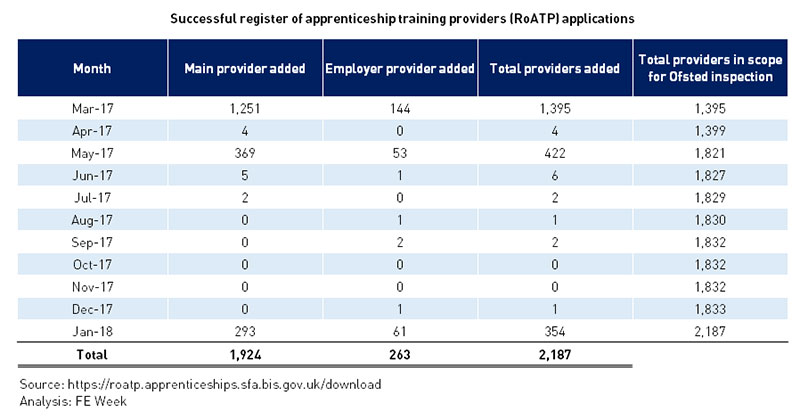 The government increased the size of the register of apprenticeship training providers (RoATP) by 354 today, pushing the total to 2,187 organisations with direct access to funding and in scope for Ofsted inspection.

The number of apprenticeship providers now in scope for Ofsted inspection, assuming the vast majority recruit level two and three apprentices, has now more than doubled since the levy reforms were introduced last year.

The majority of successful organisations in this third official application window are private companies, 12 of which have yet to file their first set of accounts with Companies House.

In addition, 15 universities, including the University of Cambridge, join the register taking the total number of universities on RoATP to just over 100. Under current arrangements, degree level apprenticeships will be inspected by the Quality Assurance Agency for Higher Education and where there is a prescribed HE qualification contained within an apprenticeship at Levels 4 to 5, this will be done jointly with Ofsted.

Funding allocations for 2016/17 suggest that prior to the introduction of RoAPT there were 837 providers in scope for inspection and in the same year Ofsted inspected 189 providers on the delivery of their apprenticeships.

In a wide ranging FE Week interview last March, the Ofsted chief inspector Amanda Spielman was asked about the impact of RoATP, which Ms Spielman said included “a lot of people with very limited experience and potentially quite a lot of fragmentation,”

When pressed on a prediction that the number of providers would exceed 2000, against a backdrop of ongoing budget reductions at Ofsted, Ms Spielman said she and Paul Joyce, Ofsted’s deputy director for FE and skills, were “worried”.

Earlier this month, at a recent Public Accounts Committee hearing, Ms Spielman said: “This is something that I raised last year with Jonathan Slater [the permanent secretary at the Department for Education], that if the levy policy was a success then a lot of these new providers are going to come on stream and start having learners and we expect to have more work and need more resource to do that,” she said.

“We had the acknowledgement that the more work we had the greater resource we would need,” she added.

“We haven’t got a specific resource increase because we don’t know how many of these [new providers] will come on stream with a volume of learners. But we have the acknowledgement in principle that this will be required.”

The following day the issue was also raised during an Education Select Committee session as part of the inquiry into apprenticeship quality.

Joe Dromey, a senior research fellow for the policy think-tank IPPR, warned apprenticeship numbers and Ofsted resource was “going in opposite directions”.

Of the 354 additions, 61 are employer providers that can now directly access their own levy funding and include household names such as the Salvation Army, Greggs, British Airways, River Island and Lloyds Bank.

And the 2,187 total does not include the 114 organisations added to the 276 with ‘supporting provider’ status taking their total to 390 on RoATP.

Providers catagorised as ‘supporting’ cannot access funding directly. They can only subcontract from one of the main providers up to the value of £500,000 per year and are not directly in scope for Ofsted inspection.

The Education and Skills Funding Agency has so far completed three official RoAPT application windows, and as reported by FE Week last September, is currently reviewing the process.

For more information and analysis see the next edition of FE Week.