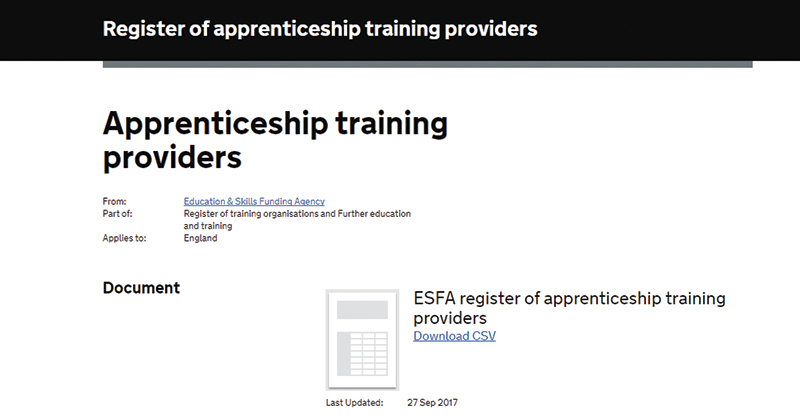 The government is already planning to review its register of apprenticeship training providers, but not until the new window for applications has closed.

The ESFA offered training providers a third chance to get onto the register at the end of September, but admitted in its weekly update bulletin that this would be the last time before a review.

It wrote: “This will be the final time the register opens before we intend to review it to ensure that it continues to offer employers confidence that those listed can deliver the highest-quality apprenticeship training.”

FE Week has covered ongoing concerns with the RoATP since it was first published in March, when it was criticised about the numerous small and inexperienced companies that approved to deliver apprenticeships, including 48 “new organisations without a financial track record”.

A ban on companies with no financial track record from applying is likely to be on the agenda for the review.

The first two windows saw the number of registered providers directly receiving government funding for apprenticeships more than double, from 837 last year to 1,879 in May.

It has also worried Ofsted and Ofqual, which are now have to regulate this explosion in providers and assessments

Meanwhile, even though hundreds of approved providers with little or no track record have undergone mandatory training to allow them to deliver apprenticeships, promises made in June by Keith Smith, a senior ESFA official, that inexperienced providers would receive audit visits by September have not been honoured.

FE Week understands that one-to-one audits for new providers will begin next month.

In a letter sent to a twice-unsuccessful applicant in September, the skills minister Anne Milton meanwhile admitted that the ESFA was “working on improving the quality of its communications”.

“I sincerely apologise for any conflicting information you may have been given about the opening of the RoATP,” she wrote in the letter, seen by FE Week.

“The ESFA is working on improving the quality of its communications, and feedback like this really helps it to know where it needs to improve.”

The system has also come in for criticism from Ofsted’s chief inspector Amanda Spielman, who spoke to FE Week about the impact that the number of new providers would have on the inspection service back in March.

“We have very limited information but it is clear there are a lot of would be new entrants, a lot of people with very limited experience and potentially quite a lot of fragmentation,” she said.

“What that will actually translate into in terms of who gets contracts and actually starts providing apprenticeships isn’t entirely clear. I suspect that a lot of those registrations will be optimistic things that may never translate into actual learners on the ground.”

The first register saw a number of established providers fail to make it onto the approved list, including Bournemouth and Poole College, Hartlepool College and every single one of Birmingham’s general FE colleges.

Amongst the successful providers, there were three new companies with no track record at all on government apprenticeships, and which were run by one man from a rented office in Cheshire, and one training academy which had ceased trading by the time the register was first published.

Although many established providers that failed the first time around made it onto the second register, which opened for applications in March and was published in May, they were joined by several more one-man bands. These included one company with no previous experience registered to a semi-detached house in Birmingham.

The application window will close at 5pm on Friday, October 27, and the updated list is expected to appear in January 2018.

Click here for more on how to apply to the register (gov.uk)