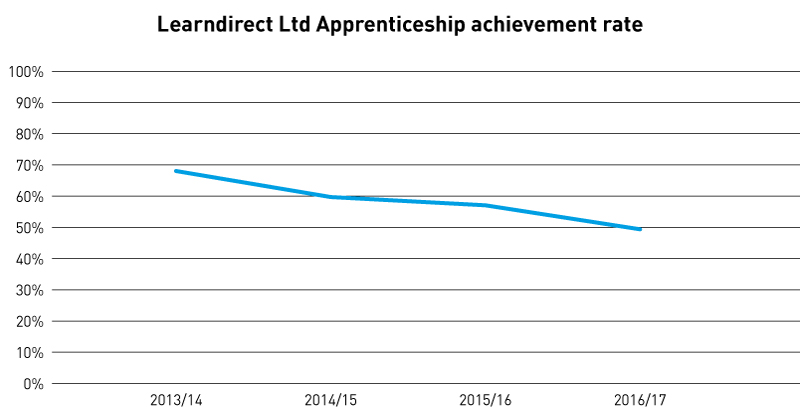 More than half of the 17,000 apprentices due to complete their course with Learndirect last year failed, as its achievement rate slumped a further 8.6 percentage points, FE Week can reveal.

These latest figures now mean that nearly 25,000 learners have failed to successfully complete their apprenticeship at the nation’s biggest FE provider over the last four years – during which time it was given over £150 million to deliver these qualifications.

The ESFA shared its provisional data for individual providers in 2016/17 last week, revealing that Learndirect had accomplished its worst ever overall achievement rate for apprenticeships.

Back in November, following its first monitoring visit since Learndirect’s infamous grade four, Ofsted announced that its rates had fallen below the 57.8 per cent dip recorded in 2015/16, but that the actual figure would not be available to the public until as late as June.

FE Week has now seen the data and can reveal that during the last academic year, Learndirect’s cohort of 17,033 apprentices had an overall achievement rate of just 49.2 per cent. In other words, more than half failed to attain their qualification.

This is significantly below the ESFA’s minimum threshold of 62 per cent and raises yet more concerns about the quality of training its apprentices are receiving.

The timescale of the 2016/17 figures shows that even after Learndirect’s damning inspection in March, when concerns about its delivery were first raised, it didn’t sharpen up quickly and continued to fail the majority of its trainees.

Its achievement rate has dropped considerably over the last four years (see table), and since 2013/14, Learndirect has trained 58,283 apprentices but 24,712 of them failed to achieve their qualifications.

During that time, it was given £153 million by the ESFA to deliver apprenticeships, according to the National Audit Office. It will get an additional £14 million to deliver the qualifications in 2017/18.

During the full inspection in March, Ofsted inspectors slammed managers for allowing around a third of apprentices to “not receive their entitlement to off-the-job learning” and miss out on “the skills they require to progress to the next step in their career”.

Its monitoring visit report from November said it still “remains unclear” what off-the-job training had taken place at the provider.

It added that senior leaders had overseen the “phased introduction” of a new policy to clarify how assessors are expected to plan and record apprentices’ off-the-job training, but this did not start until two months after the grade four.

The monitoring visit did have some more positive news about the current delivery of apprenticeships, however.

“Since the inspection, the proportion of apprentices leaving their programmes early has reduced, and the number of apprentices on unauthorised breaks in learning, which was a major contributing factor to the poor overall achievement rates in 2016/17, has declined significantly,” inspectors wrote.

“As a result, the proportion of apprentices completing their qualifications is beginning to increase, but from a very low base.”

There is, however, no evidence of this improvement for courses that ended by July 2017.

Learndirect has been under the microscope ever since the ‘inadequate’ report appeared in August, and the government subsequently singled it out for special treatment by allowing it to retain its contracts for almost a year – much more than the usual three-month termination period.

It was subject to an NAO investigation and then a Public Accounts Committee hearing, and the report of the latter is expected in the spring.

Learndirect declined to comment on its apprenticeship achievement rates.