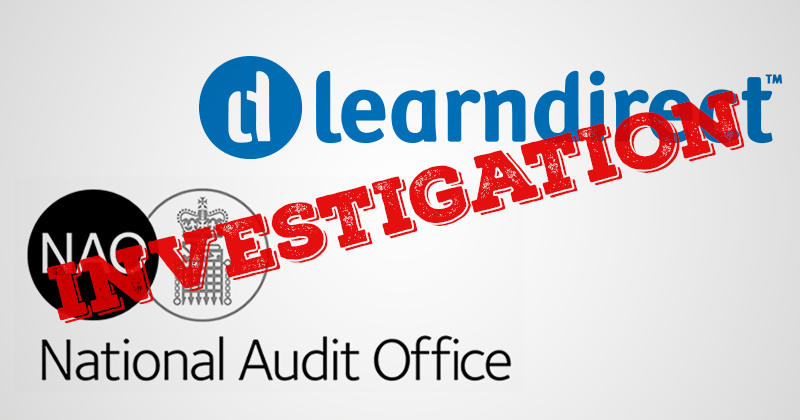 The National Audit Office has today published its report into the circumstances surrounding the monitoring, inspection and funding of Learndirect.

The nation’s biggest FE provider was given an ‘inadequate’ rating by Ofsted in a report published in August, and the government offered it special treatment by allowing it to retain its contracts for almost a year – much more than the usual three-month termination period.

Ofsted identified “risks” with Learndirect’s delivery of apprenticeships and classroom-based teaching in 2015 but only gave it an “amber” rating at the time, which did not trigger an inspection.

In March 2016, Ofsted changed this risk rating to red, and in July that year made an internal decision to schedule a full inspection for the following November.

Learndirect however asked to “defer” this inspection while it was negotiating the sale of its apprenticeships business to another party (a sale which never actually went through), to which Ofsted agreed.

On March 16 this year, Ofsted notified Learndirect that it intended to conduct an inspection between March 20 and 23, but the provider immediately asked to defer  again because of the transfer of apprenticeships activity to Learndirect Apprenticeships Ltd.

Ofsted rejected the request and went in for a full inspection.

Meg Hillier, the chair of the public accounts committee, was “concerned” that it took Ofsted so long to investigate.

“It knew Learndirect was a risk from as early as spring 2015, but the inspection took two years to arrive,” she said.

“We stood firm in the face of legal challenge in order that our findings could be made public at the earliest opportunity,” they said.

2. Learndirect’s financial health rating has been ‘inadequate’ since 2015

In late 2015, the ESFA downgraded its financial health rating for Learndirect from ‘satisfactory’ to ‘inadequate’. The agency noted that the company’s 2014/15 accounts showed “high borrowing and low profitability relative to turnover”. The company then extended its accounting period, and did not file financial statements for the year-end 31 July 2016.

The NAO said the company has explained that it took this decision because of uncertainties caused by the March 2017 Ofsted inspection. In the absence of formal financial statements, ESFA received management accounts which confirmed that the ‘inadequate’ rating was still “appropriate”.

The ESFA “kept the issue under scrutiny”, and in January this year wrote to Learndirect requiring the company to show that it was still able to meet its contractual obligations. Learndirect’s most recent set of accounts, covering the 18-month period from August 2015 to January 2017, were published in November and shared with ESFA. They revealed the scale of the provider’s debt and uncertain future.

The ESFA will hand Learndirect just shy of £95 million this year – £45 million from the Adult Education Budget, £31 million for European Social Fund projects, £14 million to complete the training of existing apprentices, and £4 million from Advanced Learner Loans.

This is the first time the provider’s apprenticeship allocation has been revealed, after the DfE repeatedly refused to release the figure. Its allocation for delivery of these courses was £38 million in 2016/17.

Learndirect’s published ESFA achievement rates for apprenticeships stood at 74 per cent in 2011/12, but fell to 58 per cent in 2015/16 – four percentage points lower than the government’s minimum threshold.

4. It made a tactical withdrawal from the AEB tender to secure funds

Learndirect originally bid for £85 million in this year’s AEB tender. But in mid-July, after the provider’s grade four, the ESFA asked Learndirect to “generate some 2017/18 AEB funding scenarios and their consequences”.

On July 25, Learndirect contacted the ESFA to withdraw its bid from the tender, believing that this course of action “offered the best prospect for receiving some AEB funding in 2017/18”.

It was aware that it would receive no funding at all if Ofsted were to publish its ‘inadequate’ rating.

On September 6, the ESFA wrote to all providers which either did not participate in the procurement or were unsuccessful, including Learndirect, to confirm a rule change that meant they would receive 75 per cent of the value of their previous contract to use in 2017/18.

In early April, the ESFA was preparing to publish the latest list of providers that had received a notice of serious breach, which should have included Learndirect as its apprenticeship achievement rate had fallen below the 62-per-cent threshold.

The Department for Education was aware that Ofsted planned to rate Learndirect’s overall effectiveness as ‘inadequate’ in its latest inspection, but that the formal report was delayed while Learndirect pursued a complaint about the inspection.

The DfE’s communications team subsequently asked for Learndirect to be omitted from the list, because it “did not want any information suggesting that the company was not meeting expectations to be in the public domain until Ofsted had made its final rating public”.

FE Week reported this at the time, but the DfE refused to give a reason for why it was omitted; that mystery has now been solved.

6. Learndirect will lose its Home Office and STA contracts

Learndirect is likely to lose its other government contracts, including those currently held with the Home Office and Standards and Testing Agency, to deliver the Life in the UK test and professional skills tests respectively.

Both contracts, which will bring a combined income of £10.8 million to Learndirect this year, will be put out for tender next year. The Home Office contract was already due to run out in June, but the STA agreement was meant to run until 2019.

The NAO’s report said the re-procurements of these contracts will be in an “open competitive tender”. As such, Learndirect “will be eligible to bid for the contracts”.

“Learndirect ltd welcomes the publication of the NAO report today.

“Having invited the NAO into Learndirect and undertaken a number of meetings with the team leading this piece of work, we believe that the report gives a balanced view of the decisions that have been made by Ofsted and the ESFA concerning the monitoring, inspection and funding of Learndirect.

“The report recognises that Learndirect has been operating in a challenging funding environment over the last few years and has had to make significant changes to its business to reflect reduced funding in the adult skills arena.

“Since the inspection, Learndirect has worked closely with the ESFA and Ofsted to ensure that the provision being offered to learners and apprentices continues to improve. “Significant improvements have been recognised in the recent monitoring inspection undertaken any Ofsted in November 2017.

“This has been a particularly difficult time for the company and especially the many hundreds of Learndirect staff who are wholly committed to ensuring the best possible experience for their learners and apprentices.”