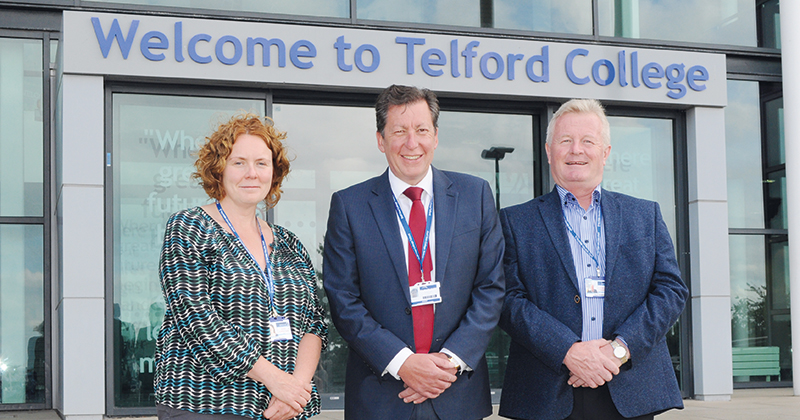 A struggling college received a massive £21 million bailout from the government as part of its recent merger deal, FE Week has learned.

Telford College of Arts and Technology formally joined forces with neighbouring New College Telford to form Telford College shortly before Christmas, over 18 months after the partnership was first announced.

But a source close to the merger, who did not want to be named, told FE Week that TCAT’s financial troubles were so severe that it needed the multimillion-pound cash injection from the government’s restructuring facility.

The grade three college, which had an income of £19.5 million in 2015/16, currently has three notices of concern from the Education and Skills Funding Agency, for financial health, financial control and apprenticeship minimum standards, and was subject to FE commissioner intervention in 2016.

Graham Guest, the principal of the new college, admitted to FE Week that it had received funding, but refused to confirm the amount.

“The college continues to work with the Transactions Unit [which administers the restructuring facility] and Barclays to review its finances and long term liabilities,” he said.

“Due to the commercial sensitivity of the merger we are unable to provide more information while discussions continue to be held.”

The Department for Education would also not discuss the sums involved, and claimed the college’s accounts – which include details of any financial support – would be published in due course.

Just £120 million had been allocated to 10 colleges from the restructuring facility by October last year, meaning that the TCAT deal is worth almost twice the average sum dished out so far.

Despite this, a DfE spokesperson insisted the facility was “not being used to prop up failing colleges”.

“The restructuring facility is designed to help colleges make major changes following an area review recommendation that they cannot fund themselves and that will result in high-quality provision for the local community,” she said.

TCAT received its first notice of concern for financial health in November 2015.

This prompted a visit from the then-FE commissioner Sir David Collins, who placed the college into administered status in January 2016.

His report noted that “the college has experienced a rapid decline in its financial health in recent years”, and “over-optimistic forecasting” was deemed a “core problem”.

That July, the college earned the dubious honour of being the first to receive a clean sweep of notices of concern since the SFA started publishing them, a month after Ofsted branded it ‘inadequate’.

But its notice for inspection was lifted last year, after it improved its grade to ‘requires improvement’ at an inspection in June.

The merger between TCAT and New College Telford, also rated ‘requires improvement’, was first proposed in April 2016, shortly before the end of the Marches and Worcestershire area review which both took part in.

According to the review report, “the merger has the potential to deliver efficiency savings through a complete review of the operations of both colleges, which are sited a mile apart”.