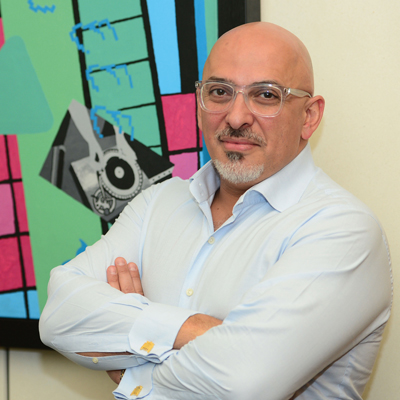 The Prime Minister’s apprenticeship advisor Nadhim Zahawi can hardly believe how far he has come, from fleeing Iraq as a child and being so quiet at his first English school that teachers thought he had learning difficulties.

Zahawi and his Kurdish family fled from Iraq in 1978, when he was just 11, to escape a brutal ethnic cleansing programme.

He described the transition from Baghdad to the UK as harrowing.

“When you’re that young, you don’t realise why your parents have made such a big move, you’re leaving all your friends,” he says. “It’s really difficult.”

“I was the quietest boy in the class — the teachers thought I had learning difficulties because I was so quiet,” he recalls.

Within six months he had learned to speak English and was adapting to his new home, but it was still “a really tough time”.

“I think the first week I was at school, a bunch of kids thought it would be a good idea just to see whether I could swim in Holland Park pond,” he says. “I knew what it was like to run for your life.”

But these early challenges have not diminished the gratitude he feels towards the UK, and the sense of wonder at how his life has developed here.

He says: “Every morning I wake up and I have to pinch myself when I stand in front of the mirror.

“When I look at what’s happening in Syria, or even in Iraq itself, I identify with so many of those people. That could have been me, so easily.”

I knew what it was like to run for your life

After his early difficulties in the state school system, Zahawi’s parents decided to move him into private education.

“They scraped enough money together to put me into Ibstock Place School first, and then Kings College School [an independent boys’ school in Wimbledon].”

Kings gave Zahawi “real coincidence” and after doing well in his A-levels, he went on to study chemical engineering at University College London.

When asked why he chose the course, he says: “Being the son of immigrants, mum and dad either wanted me to be a doctor or an engineer — you’ve got no choice. It’s like you’d break their hearts [if you did anything else].”

Zahawi enjoyed his degree, but admitted he never really wanted to practice as a chemical engineer, despite the best wishes of his parents.

He would have preferred to ride horses for a living and says: “I was a pretty good jockey. My ambition was to become an international showjumper at some stage, but that didn’t happen.”

Zahawi set up a small business after leaving university with a friend, focusing on property, but they ran into difficulties when the market crashed in the late 1980s.

It led to a change of focus, with the launch of another business that sold colour-changing T-shirts all over the UK.

He recalls: “They were a huge hit for about 18 months. I think we sold over 3m T-shirts and they did brilliantly.”

Zahawi later worked as a European marketing director for Smith and Brooks, while also pursuing his interest in politics through getting elected onto Wandsworth Council.

It was at this time that he met Stephan Shakespeare, with whom he went on to found the highly successful market research company, YouGov, in 2005.

He is still really proud of the company and described its launch as “my big successful moment”.

But after five years as chief executive of YouGov, Zahawi saw a new opportunity that he couldn’t pass up.

He explained to his business partner in 2010 that the upcoming election was going to be huge, and it was time to “try and come into politics and hopefully offer an alternative”.

He was elected as Conservative candidate for Stratford-on-Avon — which he describes as “the greatest seat in the country” — and now splits his time between London and Tysoe in the south of Stratford, with his wife and children doing the same.

He met Lana, the sister of one of his best friends, when he was a teenager and is still clearly smitten.

As well as looking after the family, Lana is a co-director of the pair’s business consultancy company Zahawi & Zahawi.

She also shares his interest in horse riding and they run a yard at home.

“I love it. It’s the one time I can sort of just switch off completely, when you’re out on a horse,” he says.

They used to have a full house, with 19-year-old twin boys and a three-year-old girl, but the boys have now moved to the US to study at Princeton University.

Zahawi is clearly proud of and enjoys spending time with his daughter.

He took the trouble to show me a hand-painted green mug, in his office, that she made for him and recalled a recent trip with her to London to see the musical adaption of the classic Roald Dahl story, Matilda.

“I think she was the youngest person in the audience but she sat through the whole thing,” he says.

Looking to the future, Zahawi is excited about his work as the PM’s apprenticeship adviser — a role he was given in November last year.

“I think I’ve got the best job in this place [Parliament], I relish the challenge,” he says.

He has high aspirations for the future of apprenticeships and the impact of the government reforms.

“I want to get to a place where, when the envelope lands on the carpet with an offer from Oxbridge or an apprenticeship, you as a parent are just as excited and as happy for your son or daughter to go down the apprenticeship route.”

Zahawi feels that apprentices themselves are doing a good job of championing this path into employment.

“I see it now all the time, where apprentices are saying ‘Look at me — I’ve got a great career’,” he says.

But he adds: “I want to get to a place where, when I’m long gone from here, when we’re all long gone, the system just works — where I don’t meet young people who say to me, ‘Oh, I fell upon it by accident’.

“The options are there for young people. It’s not just the traditional route of going to university — there is another route here which is aspirational, and can lead to a great career.”

Perfume by Patrick Suskind, it’s just a beautifully written book, and I thoroughly recommend it to anyone.

The best way for me to be able to switch off from work is playing with my three-year-old daughter. Being an MP is a very full-on job, and I often work long hours late nights, so when I have the opportunity to spend some time with her I take it.

People in businesses, national or local government who make my constituents’ lives more difficult by just mindlessly following the rules — even if it’s against all common sense.

As the Member of Parliament for Stratford-on-Avon, it has to be Shakespeare – especially as we commemorate the 400th anniversary of his death in April. Yet another reason to visit beautiful Stratford this year, if you needed one.

I wanted to be an international show jumper, but I’ve been very happy to be an entrepreneur and then an MP.

1985: Started a degree in chemical engineering at UCL

2010: Elected as Conservative MP for Stratford on Avon

2011: Co-authored Masters of Nothing, a book that examined the financial crisis through behavioural economics, with fellow MP Matt Hancock