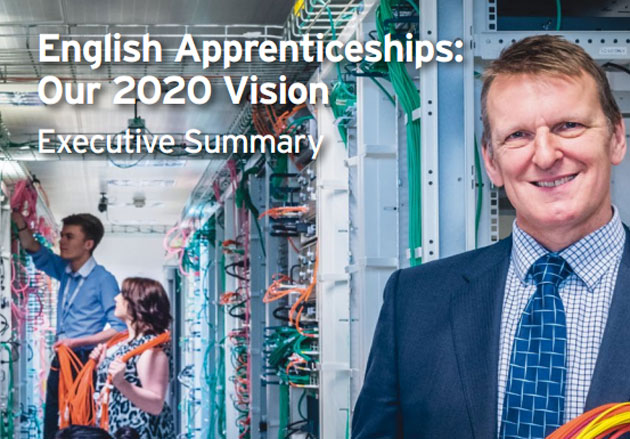 The government has scrapped plans to stop funding apprenticeship frameworks after 2017/18.

The cut-off, that would ensure providers were only delivering new Trailblazer standards come 2018/19, was first announced in October 2013, but speculation has been mounting in recent months as to whether ministers were looking to step back from the date.

Fuelling such speculation has been frustration in the sector at the supply of new standards, while there has also been a low take-up for those already available. But it was revealed in the government’s 2020 vision document (pictured), published on December 7, that the 2017/18 end of frameworks has now been dropped.

According to the document, the government’s “aim was for all new apprenticeship starts to be on standards from 2017/18” instead of existing apprenticeship frameworks.

But, it added: “We think the recent announcement of the apprenticeship levy warrants giving employers longer to consider which occupations they will require apprenticeships for.

“To allow for this, we envisage a migration from apprenticeship frameworks to standards over the course of the Parliament, with as much of this to take place by 2017/18 as possible.

“We will stagger the withdrawal of public funding for new starts on framework apprenticeships as employers take on apprentices on the new standards, and give reasonable prior notice to training providers of this so they can review their training offer.”

A Department for Business, Innovation and Skills (BIS) spokesperson declined to comment on how long a “reasonable prior notice” was and whether the same minimum notice would apply for all frameworks.

He simply said BIS was “currently developing the approach and will provide details in due course”.

The government was forced to defend progress with the implementation of Trailblazers in June, after FE Week reported that official figures indicated there had been just 300 starts on the new programmes in nine months.

Another FE Week report on August 6 revealed frustration was growing among Trailblazer apprenticeship designers, with many of the new standards still awaiting government approval for delivery almost a year after they were published.

Just 68 standards had been published by BIS as ready for delivery as of Thursday.

Yet the government said in August that more than 350 standards had either been delivered or were being developed. Shadow Skills Minister Gordon Marsden said: “What is clear from BIS being forced to slow down the transfer to Trailblazer apprenticeships is it comes from their substantial failures to sign off proposals submitted by the employer-led consortia in a timely fashion.

“It underlines the way BIS staffing and budget cuts by government have undermined the department’s capacity to deliver changes.

Over-confidence on timelines and undercapacity to act on them is a potentially toxic combination.”

An Association of Employment and Learning Providers (AELP) spokesperson said: “A positive outcome from AELP’s representations is the announced transition from the old apprenticeship frameworks to the new standards.

“Giving employers and providers adequate notice and staggering the funding changeover will help smooth the introduction of the reforms.”

The BIS spokesperson declined to comment on Mr Marsden’s comments.