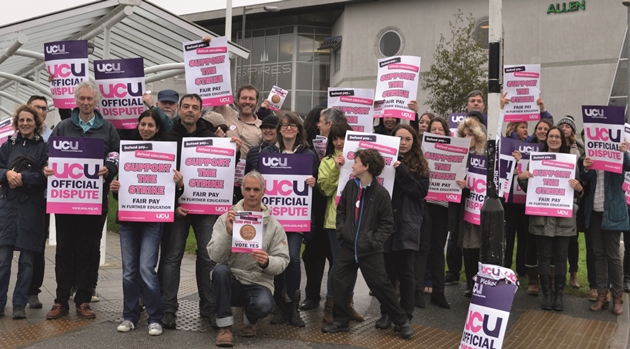 Colleges face the threat of further strikes after the University and College Union (UCU) told FE Week it planned to consult members about the “next steps” in its dispute with the Association of Colleges (Aoc) over pay.

A UCU spokesperson said that 207 colleges had been affected by the strike action on Tuesday (November 10), which was called after talks last month between the two over the AoC’s proposal for a pay freeze in 2015/16 failed to reach agreement.

He told FE Week that the union “remained open and willing” to enter into talks with the AoC to avoid further industrial action, but warned it “would be consulting with members in the coming weeks about the next steps in the campaign”.

And the AoC indicated that it was in no mood to compromise, when a spokesperson told FE Week: “We haven’t got any plans to reopen negotiations.”

The UCU claimed that the vote came after employers, represented by the AoC, rejected a request for £1 per hour extra for staff.

Marc Whitworth, the AoC’s director of employment policy and services said before Tuesday’s strike, which the UCU claimed almost 20,000 people took part in nationwide, that its pay offer reflected the “stringent financial circumstances in the sector” and “significant external pressures” on colleges.

The proposal had also been based on feedback from AoC members, he added.

“There is a willingness from the employers’ side to work together to protect the prospects of FE, its skilled workforce and the students it serves,” he added.

The UCU held rallies on Tuesday to coincide with the strike at the Emmanuel Centre, Westminster, and the Birmingham and Midland Institute, Birmingham, with speakers including Shadow Chancellor John McDonnell.

The AoC declined to comment on how many people took part in Tuesday’s strike or how many colleges were involved.