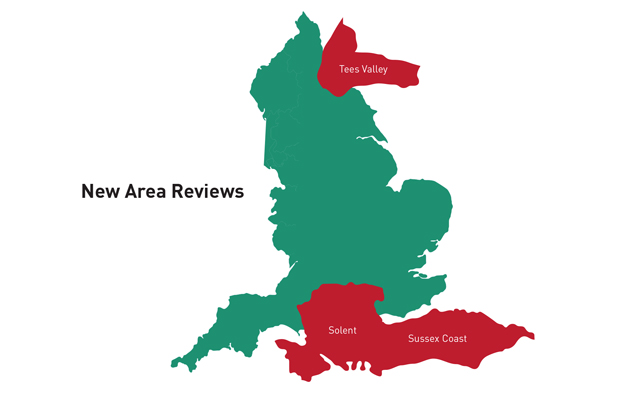 Twenty one general FE colleges and 13 sixth form colleges (SFCs) will be involved in three extra post-16 education and training area reviews announced by the government this morning.

They will be for the Tees Valley, Sussex Coast and Solent regions, launching on October 1 and 22, and November 5 respectively — with the government warning that more area reviews will be announced “shortly”.

It comes after FE Week reported on September 8 that 22 general FE colleges and 16 SFCs were to be involved in the first round of three post-16 education and training area reviews announced by the government.

The reviews for the Birmingham and Solihull and Greater Manchester areas launched on September 18 and 21 respectively, while a further one for Sheffield city region is set to begin on Monday (September 28).

And, just like the first round of reviews, those announced today do not list any schools sixth forms or independent learning providers.

A spokesperson for the Department for Business, Innovation and Skills (BIS) and Department for Education said this morning: “We are announcing three further area reviews that are part of the first wave.

“These will be Tees Valley, Sussex Coast and Solent. This statement sets out the scope of six of the first wave reviews. Further area reviews will be announced shortly.” He is also chairing the Birmingham and Solihull, and Sheffield City Region steering groups, but the Greater Manchester group’s chair is chief executive of Trafford City Council Theresa Grant.

The reviews will then focus on the current structure of FE and SFCs, although the BIS spokesperson said “there will be opportunities for other institutions (including schools and independent providers) to opt in to this stage of the analysis”.

Regional School Commissioners will consider the implications of the first stage of the analysis for school sixth form provision.

The process has come in for criticism from sector leaders for not directly including school and academy post-16 providers.

They included James Kewin, deputy chief executive of the Sixth Form Colleges Association, who told FE Week: “A genuine process of area based reviews would be extremely welcome, as it would scrutinise the performance and viability of all 16 to 19 providers – including school and academy sixth forms.”

The results of an exclusive FE Week survey published on September 11 also showed that almost 90 per cent of principals affected by the first three area reviews announced on September 8 were unhappy with the government’s guidance.

The colleges involved in the latest three reviews are yet to comment.

Here are the colleges involved in the latest three area reviews announced by the government: