A row erupted between a university technical college and a sixth form college yesterday over “inaccurate” achievement rate claims.

The tweet, which has now been deleted, said the UTC’s average result of 35.93 was above both the national average and the sixth form college.

The SFC, formerly attended by education secretary Gavin Williamson, tweeted in reply (also since deleted) that the claims were “misleading” and “inaccurate”.

Results in the two subjects could not be compared, the sixth form college retorted, because their engineering and computer science courses were BTECs, not technical levels like at the UTC.

The college also mentioned how it had achieved an Ofsted grade two at its last inspection, compared to the UTC’s grade three.

A spokesperson for the college said they were “disappointed the UTC felt the need to publish some inaccurate statistics” and had requested they take the post down, but received no response.

Resultantly, the college “felt it was important to ensure the correct data was available, which we posted”.

“We have no argument with the UTC and will continue to work in partnership with all of the local schools to ensure the best possible offer for the young people of Scarborough.” 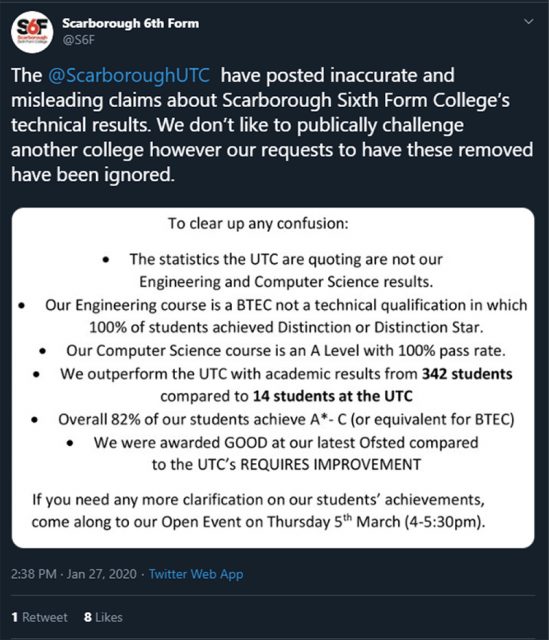 The UTC has since backtracked on the tweet, with a spokesperson telling FE Week they “absolutely acknowledge” there had been a “technical inaccuracy”.

The graph should have said “Technical Level Results” instead of just “Engineering and Computer Science,” the spokesperson continued.

They said the mistake was down to a member of staff misinterpreting something the principal had written to parents about the provider’s technical levels performance.

A post on the UTC’s Facebook page showing the correct graph, based on the DfE 16 to 18 performance tables, details how the UTC’s average point score for technical levels is indeed 35.93 per cent, compared to the sixth form’s 28.17. 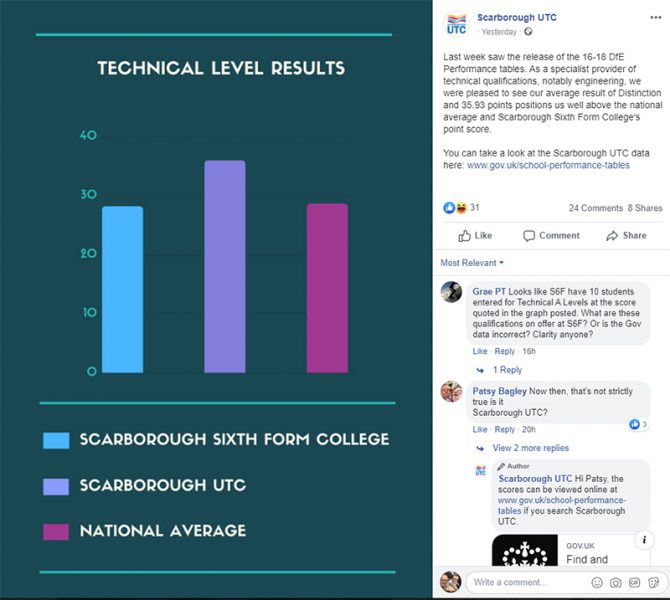 This isn’t the first time UTCs have been called out for data claims: in October 2018 FE Week revealed how government data undermined boasts about UTCs’ “excellent destinations”, and showed the level of NEET leavers to be eight times higher than what was claimed.