Schools are failing to comply with new careers guidance rules, further fuelling concern from FE providers that the Baker clause is being ignored.

FE Week analysis found the 10 biggest multi-academy trusts in England have not conformed to a new requirement that says all schools should publish detailed careers information online.

And in a survey of FE providers commissioned by the Department for Education, only five per cent of respondents said they found all schools have been compliant in their area in allowing providers to enter schools to speak to learners.

The DfE said it plans to begin auditing schools and will directly intervene where necessary to ensure all schools are complying with the
Baker clause. Skills minister Anne Milton has encouraged providers to report on schools that are not following the new regulations by
contacting her directly.

From September 1, academies, free schools and colleges should publish details about the careers programme delivered to pupils from Year 8 until Year 13, contact details for their careers leader, how the school measures the success of the careers programme and when  the published information will next be reviewed.

However, none of the 10 biggest trusts in England have 100 per cent compliance from all of their secondary schools. FE Week’s  investigation has unearthed empty careers webpages, expectations that the “vast majority” of pupils will simply attend university
and some websites that do not mention careers at all.

A spokesperson for the DfE said if a school does not provide this information, the department “will write to the school and ask for
evidence of compliance”.

She added: “If this is not followed, we will take appropriate action.” But she would not give details on how compliance is being  monitored or what action will be taken against schools. 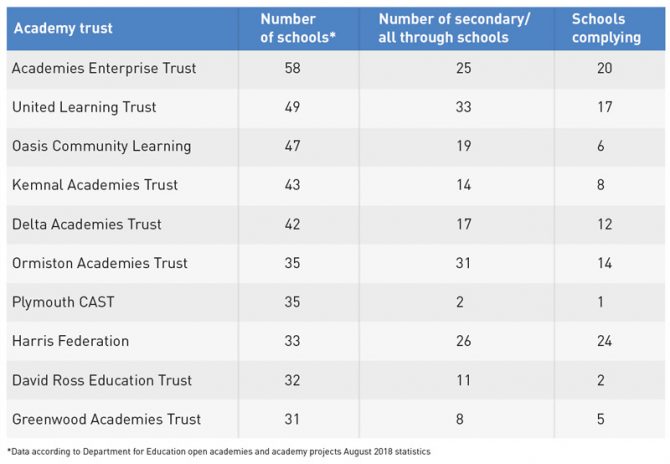 Oasis Academy Don Valley, run by Oasis Community Learning, has a blank careers page, while Oasis Academy Enfield and Oasis Academy Hadley have only published careers information in a section for post-16 learners, which states: “We expect that the vast majority of our Year 13 students will go on to university when they leave.”

An Oasis spokesperson said its academies will publish new information “in the coming weeks”.

Less than half of the 31 secondary schools run by Ormiston Academies Trust have followed the requirements  for publishing careers guidance, and as have only two of the 11 run by the David Ross Education Trust.

A spokesperson for Ormiston said the trust would ensure its complete compliance by the end of September, and added that its careers guidance “has not been driven by a need to meet website regulation, which is not an indication of quality, but by a firm belief that best-practice careers guidance transforms life chances”.

Kemnal and Greenwood academies trusts said their schools were working towards being fully compliant, and Delta Academies Trust said new websites for all of its academies will go live this month. A spokesperson for Academies Enterprise Trust said the trust expected all its academies to be compliant and was supporting them to make sure they were.

Mark Dawe, chief executive of the Association of Employment and Learning Providers, said it had to be asked “whether the schools failing on careers guidance are really serving the interests of their students.

“They should surely be explaining that apprenticeships are now available up to and including degree level with top employers, good salaries and no debt.”

FE providers have also revealed that schools are not fully complying with the Baker Clause requirement, which says schools must open their doors to providers to speak to pupils about technical and vocational training.

AELP carried out a survey of 74 providers on behalf of the DfE in June. Although the government has not made the results public, FE Week has obtained them through a freedom of information request.

They showed that just five per cent of respondents said they had experienced full compliance in their area, while nearly 20 per cent found no compliance at all.

Mr Dawe said the survey results “demonstrate why this is such a vital issue”, and said local networks of apprenticeship providers should be “fully engaged in the fulfilling of the Baker Clause requirements”.