The controversial level 7 senior leader apprenticeship has again hit the headlines in recent days, after the education secretary questioned whether the £18,000 levy-funded MBA was “value for money”. The programme is traditionally associated with high profile universities running courses for executives in the corporate sector. But FE Week found it is an entrepreneur servicing schools that has now hit the MBA apprenticeship top spot so far this year…

One of his subsidiaries is a small London-based company called Captiva Learning, which trades as the National College of Education. It recorded the most senior leader 7 starts (180) out of all training providers on the standard in the first quarter of 2019/20.

Last year they recruited 250 individuals onto the programme. Overall they are the provider with the second biggest number of starts on the apprenticeship since its launch in February 2018 – pipping many top universities such as Middlesex and Exeter.

Captiva could earn up to £3 million from the 180 apprentices they recruited in September if they charged the standard’s upper funding rate of £18,000.

And when the 250 previous starts are combined, that income rises to over £7 million in less than two years.

Cobb is a well-known businessman in the schools sector, specialising in teacher recruitment and training. He is listed on Companies House as an “active” director for 15 firms.

All the higher level apprenticeships his company delivers are to school staff, mostly academy trust chief executives, headteachers and deputies.

He says while he has no numerical growth target, he does want to extend the offer further across England.

Defending the apprenticeship, he told FE Week it is often a “mischaracterisation” that the standard is simply an MBA being done on the cheap by senior executives at big FTSE 200 companies such as Deloitte.

“I just don’t think that’s right,” Cobb said. “Around 90 per cent of our level 7 learners are doing it as a master’s. It is an important qualification for senior leaders and actually when you look at the numbers, over 60 per cent have been done in the public sector.

“I’m not sure Gavin Williamson would stand by policies that cut off funding to public sector leaders, which is what this is doing.”

Cobb’s customers are exclusively schools. His firm also delivers to over 200 apprentices across the level 3 team leader/supervisor and level 5 operations/departmental manager.

So, with double the number of starts on the level 7 standard, why are schools lapping up this management apprenticeship with Captiva? Cobb puts it down to the “substandard” National Professional Qualifications for teachers that have been on offer over the last 10 to 15 years.

“If we’re facing a recruitment crisis in education we’re facing a bigger leadership crisis and actually master’s is the currency amongst these people. They’re postgrad qualified professionals in their own right in schools.”

He added: “We’re quite surprised by Williamson’s statement in that respect because all different sorts of money is being poured into different types of organisations to address recruitment and retention in education, but this is the goose that lays the golden egg in terms of retention, and now we’re talking about reducing the funding where it’s clearly working very successfully.”

Cobb said he joined the apprenticeships market shortly after the levy reforms because “we thought this would be an important development”.

He admits that his firm receives criticism from the schools sector for being “profiteers”, but the “truth is we have really invested heavily into this because it’s something we passionately believe in”.

While the upper funding rate for the level 7 standard is £18,000, Cobb says his provider does follow the funding rules and takes into account an apprentice’s prior learning and experience when setting rates for individuals. His firm has charged the maximum of £18,000 in 84 per cent of starts so far, Cobb claims.

He puts his rapid growth in the market down to an “extraordinary value proposition for schools”.

Apprentices made up an average of only 0.9 per cent of the workforce in schools across England in 2018-19, despite the government’s 2.3 per cent public sector target.

“It’s really difficult for schools to engage with the levy because it’s not part of their culture,” Cobb said. “There’s still an unintended snobbery around apprenticeships, because the word apprentice means failure.

“So part of us raising awareness is about changing that narrative in schools. It’s something we’re really working hard every single day to do.”

Captiva had its first monitoring report from Ofsted published in December, which resulted in ‘reasonable progress’ ratings across the board. However, Ofsted only inspects provision up to level 5, as the higher levels are the responsibility of higher education regulator the Office for Students.

While Captiva isn’t on the OfS’ register of HE providers itself, Cobb says they are registered with the regulator through its partnership with a private higher education institution, the University of Buckingham.

He confirmed that the OfS has never visited the provider to inspect the quality of the level 7 provision.

But Cobb offers assurance that delivery of the level 7 standard is “quality”, largely because four of his lecturers “are HMI inspectors” that apply an “Ofsted lens”.

They are among 30 lecturers, tutors and assessors on his apprenticeship delivery team, who are mostly senior figures in education, ex-headteachers and school improvement advisers.

He has also recruited the former national schools commissioner, Sir David Carter, to lead on his MBA programme.

With its head office in London, apprenticeship training with Captiva is mostly delivered in the workplace as well as at various rented offices across England.

“We spend a lot of money and we have put a lot of energy into going and visiting apprentices in the workplace, delivering progress reviews, ensuring that the apprenticeship is supported by line management, that it’s actually having an impact at employer level as well as learner level.”

Cobb’s first cohort of level 7 apprentices, which totalled 156, are due to complete their programmes this summer.

Summarising his view on the management apprenticeship, he said: “People don’t leave their jobs, they leave their managers. That’s why management education is so important. It’s absolutely fundamental to successful organisations, whether that’d be a business or whether it’s a public sector institution.” 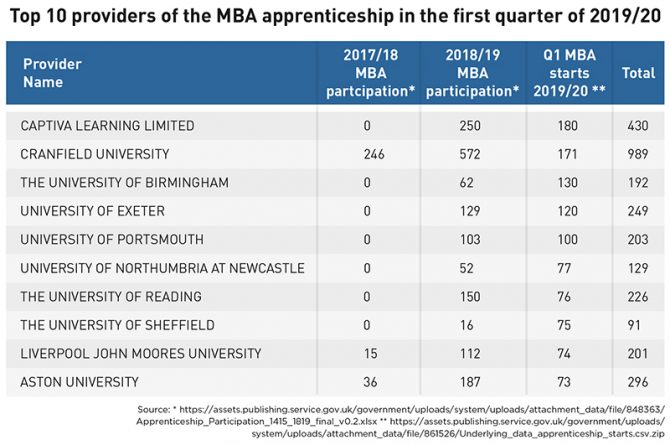