Strict rules that apprenticeships cannot involve qualifications are set to be overturned next week, FE Week understands, potentially unsticking a series of standards held up for years by the ban.

The Institute for Apprenticeships is expected to announce that qualifications, such as technical certificates that show evidence of knowledge, will be considered in the future.

Both existing qualifications and those in development will be covered in the rule change, representing a significant U-turn on previous guidance.

It’s part of the IfA’s promise to make its process and policies “faster and better”, announced in December after skills minister Anne Milton admitted that “some oil on the wheels” was needed.

The change – revealed exclusively to FE Week by a source close to the IfA – will be welcomed by many across the sector.

Current rules state that, except in “certain specific circumstances”, standards “should not incorporate qualifications”.

Exceptions exist where a qualification is a “licence to practise”, where one is required for professional registration, or if an apprentice’s career would be held back without it.

Last summer the rules were tightened to include a bar on allowing employer groups to submit a standard for approval if it includes a qualification that’s still in development.

In December, the IfA promised it would clarify when qualifications can be included in apprenticeships, because current policy had “led to some unpredictable results”.

Minutes from a board meeting held earlier that month reveal an upcoming shift in the rules.

These indicate that the board agreed to proposals from a presentation on mandatory qualifications, but noted that “there needed to be effective communication on the changes to both trailblazers and relationship managers”.

The minutes also reveal that, for the first time, Ms Milton attended the meeting, held on December 6.

A spokesperson for the IfA confirmed that this had been the skills minister’s first meeting, but declined to comment on the nature of the changes, ahead of a February 6 briefing on its ‘Faster and Better’ programme.

Since the IfA became operational in April last year, the process of standard development appears to have slowed down.

In total, just 222 (42 per cent) of the current 531 standards approved for development are available for delivery.

In a wide-ranging interview in November, Ms Milton told FE Week that she understood “where the sticking points are, where we need to put some oil on the wheels” in the apprenticeships process.

“Anything that the IfA does, anything on standards, it needs to be quick and responsive,” she said.

Anthony Elgey, the general manager at MP Futures, which is responsible for the national occupational standards for the quarrying, mineral products and mining sectors, told FE Week he’d been “fighting from the very beginning” to have qualifications included in standards for those sectors.

These included qualifications that were required by the Health and Safety Executive for someone to be permitted to work unsupervised.

But despite it appearing to fit the IfA’s criteria for an exception to the general rule, Mr Elgey said he’d been told “flat out” by the IfA that “you either remove that qualification requirement or we will never approve it”.

Without frameworks or standards the sectors could use for the last four years, “we’ve been turning apprentices away,” Mr Elgey said.

Richard Longthorp, the lead for three agriculture standards, said the issue of qualifications had “delayed the finalisation of the standards by a good 18 months”.

He enlisted the support of agriculture minister George Eustice, who raised the issue in a meeting with then-skills minister Robert Halfon, but “they still kicked it out”.

Meanwhile, Sarah McMonagle, the lead for two master builder standards, said employers in her sector had hoped to develop a “rebranded, high-quality, all-singing, all-dancing qualification” to include as the existing ones weren’t up to scratch – “but were told no”.

Employers are not alone in lobbying on the issue.

In a briefing paper published in September, the Association of Employment and Learning Providers argued that their omission “could adversely affect portability and transferability, while making it difficult to make comparisons between standards of level and breadth”. 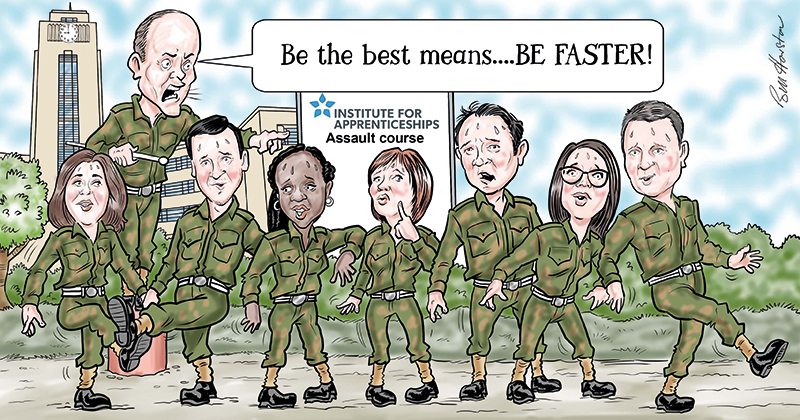 The Institute for Apprenticeships, under the new regime of Sir Gerry Berragan, launched its assault against government red tape in December.

Under the heading “faster and better”, the IfA outlined a number of improvements it would make in 2018.

“We’ve always recognised some of the systems, policies and processes we inherited needed improving,” it acknowledged.

In addition to clarified qualification rules, it promised to work with the Department for Education to refresh policy in a number of areas, including occupation and standards criteria.

The institute committed to “developing a quicker and more transparent system for making funding band recommendations” aligned to a new approvals process, “to cut out unnecessary stages and make sure new apprenticeships are ready as quickly as possible”.

It’s also pledged to speed up the process of standards development, with new two-day workshops on offer “to complete the writing of standards or assessment plans from start to finish, saving about a third of the usual time”.