Colleges denied chance to speak out over free speech legislation

Only a quarter of the providers which applied to offer T-levels in 2020 were successful, and many of those left off the list are confused about why.

Names of the 52 providers that will pilot the prestigious new technical qualifications were announced by the Department for Education late last month.

A spokesperson told FE Week they had selected from more than 200 expressions of interest.

But while 26 colleges made the cut, many – including New City College in London – were told they weren’t eligible as they had grade two ratings from Ofsted.

Published criteria had stated that providers rated either ‘good’ or ‘outstanding’ were eligible to apply.

Gerry McDonald, the college’s group principal and chief executive, said the decision “contradicts the policy messages we had been given”.

The college had been “very active in the development of T-levels”, with both the college and employer partners “getting prepared” and “keen to move forward”.

“I am confused by this decision and I will be following this up with the department,” he said.

Other big college groups to have missed out include NCG and Capital City College Group, both of which applied. 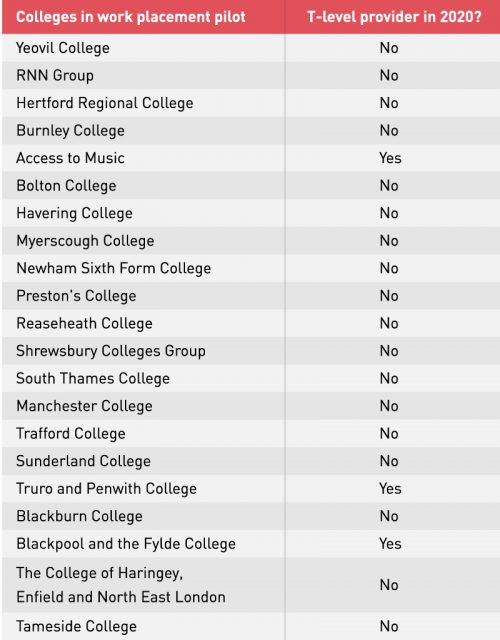 Only three of the 21 providers involved in the T-level work placement pilot will be offering new the courses in 2020.

These are Blackpool and the Fylde College, Truro and Penwith College, and Access to Music, an independent training provider.

Among those to have missed out was grade two Bolton College. Its director of curriculum Sharon Marriott described the decision-making criteria as “utterly flawed”.

By using ‘outstanding’ as a yardstick, she said, the DfE had “virtually excluded the sector who are expected to deliver the T-levels”.

Peter Mayhew-Smith, principal of grade two South Thames College, was “disappointed” not to have been chosen.

As well as the ‘good’ or ‘outstanding’ criterion, applicants needed at least ‘satisfactory’ financial health to be eligible.

If there was “significant interest”, however, the agency said it would apply additional checks to reach a “manageable number” of candidates, including giving priority to grade one providers.

It would also take steps to ensure there were providers across the range of types, and from the DfE’s opportunity areas, as set out in the government’s social mobility action plan published last December.

Of the 52 providers chosen, 32 are ‘outstanding’ and 14 are ‘good’, while a further six don’t have a current Ofsted rating.

Five of these are academies that were rated ‘outstanding’ before they converted, and the sixth is a university technical college that has yet to be inspected.

“The 52 colleges and providers were picked to deliver the first wave of the new T-levels based on published criteria set out earlier this year,” a DfE spokesperson said.

“This set out that successful colleges must, among other things, be ‘good’ or ‘outstanding’.”

Just three T-levels will be launched for teaching in 2020/21, in digital, construction, and education and childcare.

Full roll-out has been delayed until 2023, amid concerns about the planned pace of implementation.

But education secretary Damian Hinds has refused a request from his permanent secretary to delay the pilot to 2021 and is “convinced of the case to press ahead”.