Not a single apprentice started work at the Department for International Development in 2019-20.

That’s according to the latest data on how the government is progressing towards the public sector target of employing at least 2.3 per cent of their total staff as new apprentices between 2018 and 2021.

The Department for International Development’s failure to start any apprentices last year comes despite the department employing around 3,600 staff.

Of the big three government departments, the Treasury had 2.4 per cent of starts as a total of headcount last year; the Foreign Office had 2 per cent; and the Home Office had 1.1 per cent.

The Department for Exiting the European Union also didn’t recruit any apprentices in 2019-20, but this shouldn’t come as a surprise as it closed in January 2020.

The Civil Service overall is still working towards the target: the data shows its percentage of apprenticeship starts as a proportion of headcount in 2019-20 was 2.1 per cent.

It is run as an average target across the years 2017-18 to 2020-21 to “give flexibility to organisations to manage peaks and troughs in recruitment,” the government has said.

Departments who missed the 2.3 per cent target this year have been given an adjusted target to ensure they meet the 2.3 per cent average by March 2021, the Cabinet Office said with this latest release.

Public bodies have until 30 September to submit their progress towards the target each year.

For more analysis and reaction see this week’s edition of FE Week, to be published on Friday. 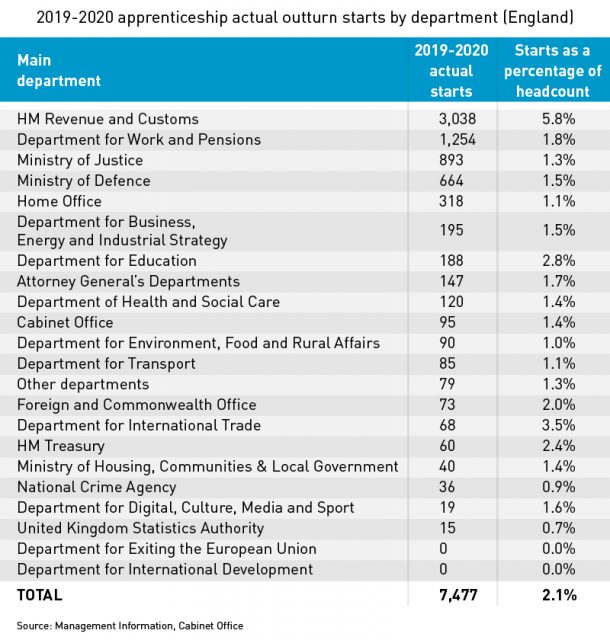