Apprenticeship starts for April are down 39 per cent, compared with the same period in 2016.

There have been 24,100 starts recorded so far in April 2018, compared with around 39,400 in April 2016 according to the Education and Skills Funding Agency’s monthly apprenticeship statistics update, published this morning.

The 2016 figures are final, whereas the 2018 figures are provisional. April 2016 is a better comparator than April 2017 given that there was a huge spike in starts prior to the introduction of the levy the following month.

Comparing first recorded starts for April 2018 to April 2017 would give a drop of 66 per cent.

FE Week analysis of the latest statistics reveals that starts are 389,800, or 22 per cent, down from where they need to be for the government to meet its target of 3m apprenticeship starts by 2020.

With 24 months left to go, an average of 66,241 starts are now needed per month for it to hit its target. 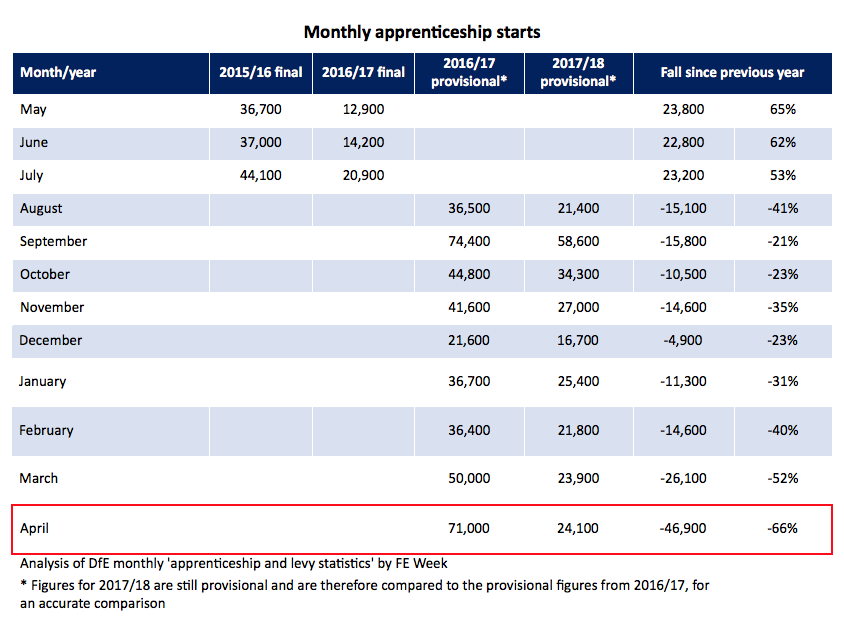 The Department for Education warned that “care should be taken when comparing individual months with previous years as they are unlikely to provide a meaningful year-on-year trend” as the “profile of apprenticeship starts changed significantly in the run up to the introduction of the levy and beyond”.

Mark Dawe, chief executive of the Association of Employment and Learning Providers, said: “We can only repeat what we have said before.  It’s time for the government to act, and suspending the co-investment requirement for small to medium-sized enterprises and young people is the right place to start.”

Stephen Evans, chief executive of the Learning and Work Institute, said he was “particularly that there are 50,000 fewer apprenticeships for 16- to 24-year-olds in the year so far compared to last year” and urged the government to look at “funding for apprenticeships for younger people”.

Skills minister Anne Milton said that while the “overall” number of people starting apprenticeships had decreased, “this is not unexpected”.

“Quality is more important than quantity,” she added.