Apprenticeship starts for the month of May 2020 fell 60 per cent on the previous year, figures published this morning show.

According to Department for Education data, there were 22,300 starts in May 2019 but this dropped to 9,000 12 months later, which would have been caused by the Covid-19 lockdown. 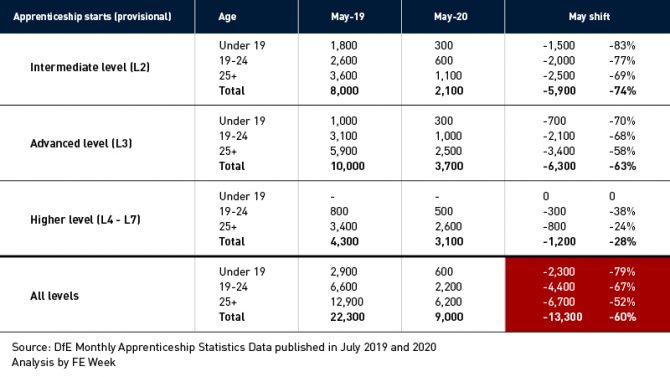 Today’s data also shows that starts have continued to fall by around half since lockdown started in March.

The DfE’s statisticians note that final data will not become available until later in the year, therefore “at this point it is unclear what the true number of starts in the affected period was or if the level of reporting at this point in the year has been affected by the lockdown”.

Latest apprenticeship vacancy data, from the government’s Find An Apprenticeship website, has been released and shows a considerable drop.

The DfE has also, for the first time, published data about its ‘Skills Toolkit’ – a website which directs people to existing free courses.

An estimate of “at least 136,000 registrations” were recorded on the courses that featured on the toolkit since it was launched in late April 2020.

The DfE said this is a “provisional” estimate as there “may be a data lag in reporting”. The department also doesn’t hold comparible data for registrations on the courses pre-Covid, so it is unclear whether their popularity has increased or fallen.

Association of Employment and Learning Providers managing director Jane Hickie said today’s starts numbers, including the “big drop” in advertised vacancies, show why the government “made a serious error in deciding that its Covid provider relief scheme should not cover the large majority of apprenticeship provision“.

“Providers are now having to take very difficult decisions about reducing capacity despite the measures announced by the chancellor in his summer statement,” she added.

“The government’s Plan for Jobs will be an acid test for getting the apprenticeship programme back on its feet.  The key question is whether the new employer incentives will be large enough to really make a difference.”

Responding to today’s data, apprenticeships and skills minister Gillian Keegan said: “Apprenticeships are a fantastic way to get ahead in a wide range of exciting industries and will also play a vital role in delivering the skills our economy needs to grow after coronavirus.

“We are also investing £111 million this year to triple the number of work placements available across England to help more young people gain the skills, experience and confidence they need to enter the world of work.”