Management standards are continuing their reign as the most popular apprenticeships, according to the first statistics for 2018/19 published by the Department for Education this week.

The team leader/supervisor had the most starts of any standard in the first quarter of the year, while three other management standards were among the 20 most popular.

But this masked a drop in starts at both level two and for those aged 16 to 18, which both fell year-on-year by two per cent.

Starts are also 15 per cent down from where they were for the same period in 2016/17, before the levy was introduced.

“Since we overhauled the apprenticeship system in 2017 more and more employers including leading firms like Royal Mail, Ernst & Young and Channel 4 are recognising the huge benefits apprentices are bringing to their workplaces,” she said.

But Association of Employment and Learning Providers boss Mark Dawe said the drop at the lowest level was a “massive issue in the context of Brexit and social mobility”.

There were 5,450 starts on the level three team leader/supervisor standard in the three months from August to October – an increase of more than 2,000 for the same period in 2017/18. 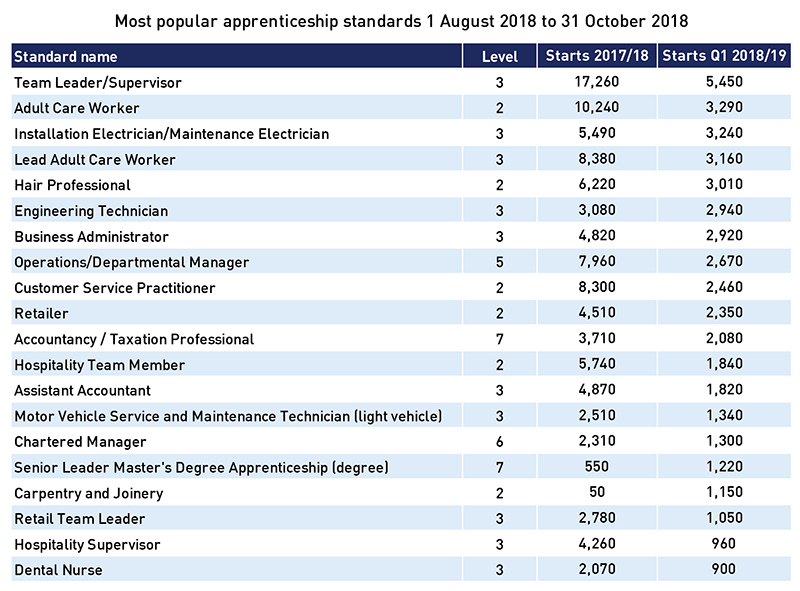 While starts at levels three and above continued to rise, those at level two dropped yet again.

This is part of an ongoing trend which has seen starts among the youngest apprentices fall by 23 per cent over the last four years – a higher proportion than any other age group.

The latest statistics come amid growing concern over the dominance of management apprenticeships and the impact they might be having on those at lower levels.

Ms Milton vowed earlier this month to “dig deeper” into the drop in level two apprenticeships, and whether it might be linked to the rise in management courses.

And in December, Ofsted chief inspector Amanda Spielman voiced her concerns that “levy money is not being spent in the intended way”, and said the watchdog had “seen examples where existing graduate schemes are in essence being rebadged as apprenticeships”