The number of people taking out advanced learner loans in the first quarter of the academic year has fallen for the third year in a row – with stats for 2018/19 down 19 per cent on 2015/16.

It comes despite the Student Loans Company lowering the eligibility age for a loan from 24 to 19 two years ago.

The number of people taking out an FE loan between August and October has fallen steadily ever since 2015/16, when 25,900 loans were taken out. 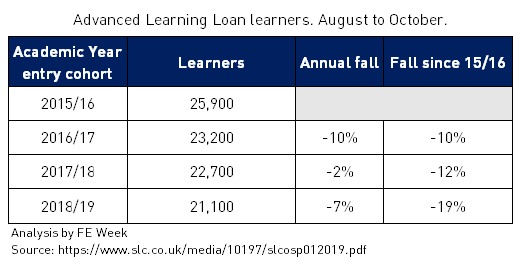 Shadow skills minister Gordon Marsden said: “These stark figures show the Government’s loans system continues to fail. Year on year half the allocated money goes back to the treasury unused.

“We have consistently said, since their introduction, and I reiterated this only this week in Parliament, that expanding loans and scrapping grants was always going to have a negative impact on the take-up of vital adult courses.

“And as today’s awful statistics show, successive Tory-led governments have completely failed to understand the needs and concerns of mature learners and others who’s circumstances are likely to be very different to traditional entrants at 18.

“Government needs to rethink their policy now. Post-Brexit it’s crucial for people to retrain and reskill.”

The advanced learner loans policy hasn’t been a huge success since it was introduced in 2013.

At the end of 2017, FE Week revealed that a massive 58 per cent of FE loans funding – amounting to almost £1 billion – had not been spent since the policy was introduced.

The shocking figure, which was discovered after a Freedom of Information request, was confirmed by the Students Loans Company, which confirmed that just £652 million in loan-funded provision had actually been delivered since 2013, against a massive £1.56 billion in allocations.

The Education and Skills Funding Agency had previously recognised they had a problem overseeing loans funded provision, particularly where much of it is subcontracted.

In addition, growth requests for advanced learner loans were paused in September last year, while in November the ESFA introduced caps for how much loan money can be allocated to a provider.

The combination of all these points is likely to be the reason for the fall in the number of people taking out the loans.