Labour has castigated the Conservatives for their “pitiful” investment in college estates, after a minister revealed that the average annual spend fell by £244 million between 2010 and 2016.

Skills minister Gillian Keegan this week released data showing that, while funding for capital improvements in FE colleges under the previous Labour government stood at £3.6 billion between 2001-02 and 2009-10, the Conservative-led coalition government spent £957 million between 2010-11 and 2015 -16.

Analysis of the figures show the average annual spend under Labour was £404 million, more than double the £160 million average spent since being out of government.

Keegan’s figures only go up to 2015-16 because, after that point, £980 million was devolved from the government through the Local Growth Fund to local enterprise partnerships to spend on objectives such as supporting college capital projects.

Shadow apprenticeships and lifelong learning minister Toby Perkins, who received the figures from Keegan in answer to a parliamentary question, said they “starkly reveal what principals across the land already know.

“That, for all the rhetoric, this government’s capital investment in our FE estate is neither transformational nor record-breaking.”

Speaking on the £1.5 billion of capital investment the government announced in March, the “largest capital investment in the sector in a generation”, Williamson promised the money would “transform” the estates of FE colleges over its five-year span.

“It will enable colleges everywhere in England to have buildings and facilities that can deliver world-class tuition.

However, Perkins called it a “pitiful insult to the FE sector” compared with the investment made under Labour.

He said £200 million, which had been brought forward to this September from the £1.5 billion, was less than Labour had spent in any year between 2005 and 2010.

Williamson’s claims of “world-class tuition” and being the largest capital investment this generation, “shows how far detached from reality he really is,” Perkins added.

Labour has “been calling for a strategic approach to developing the skills our country needs throughout ten years of Tory chopping and changing,” Perkins said, adding: “The need for investment and urgency is greater now than ever.”

But the government “needs to come clean about the fact that it has neglected this sector, and that the money they are currently talking about is small change in historic terms”.

The “insufficient” capital funding to maintain the college estate was also called out in Philip Augar’s review of post-18 education, which also said declining revenue had discouraged colleges from investing in advanced equipment and facilities.

Keegan said the government was “committed” to upgrading FE colleges over the next five years “so they are great places to learn”, through the £1.5 billion boost.

“That transformation,” she added, “has begun with an allocation of £200 million this year to FE colleges and designated institutions to tackle immediate remedial condition improvement projects.”

That is in addition to £290 million of capital funding to develop 20 employer-led Institutes of Technology.

£11.1 million has also been invested since last November in building facilities for T Levels, with an extra £5.4 million going towards specialist equipment.

Colleges have been able to access the Local Growth Fund and the IoT funding, but “there have been unrealistic expectations about the ability of institutions to supplement public grants”. 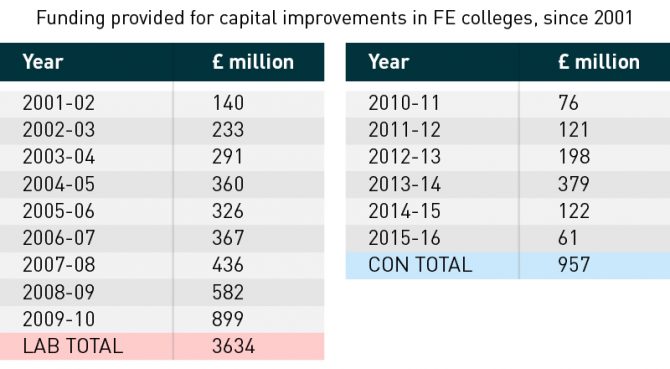