For Kirstie Donnelly, who stepped up to the role of CEO of City & Guilds in January after 8 years as managing director of its biggest arm, the test has come early and it has come hard. As if a new government with a new focus on further education and a Brexit bill putting national pressure on the skills agenda weren’t enough, the coronavirus is rewriting all the rules of what is possible across society.

“And a new shadow government too,” she reminds me. “That’s another nuance.”

Perhaps working from home particularly suits Donnelly, or perhaps she’s already acing the test. Throughout our interview her demeanor is calm and assured and her leadership vision is untroubled.

“A lot of the things I’m now having to rethink, I would have probably wanted to start to turn my attention to. The difference is speed. And focus.”

In fact, what for many is an existential crisis, to Donnelly is an “existential opportunity”. She was awarded an MBE in 2011 – the same year she joined City & Guilds from a defunct LearnDirect – for services to e-learning. If anything, the rapid move to digitalise education in response to lockdown closures is long overdue as far as she’s concerned. 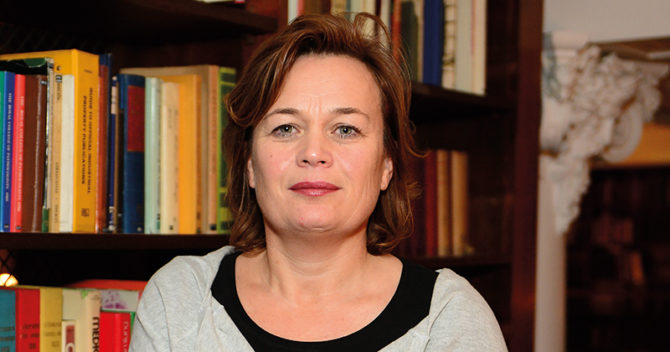 Which isn’t to say it’s been plain sailing. “It’s definitely diverted me for a short period while we had to deal with what I would call the crisis of the crisis. How do you furlough? How do you mobilise remotely your 12 to 13 hundred staff worldwide safely? But in the past week, I’ve started then to think much more about our rendezvous with the future. I believe all the things we’re talking about in a COVID context are all the things as a sector, and as an organisation in that sector, we would have had to tackle anyway. We’re just having to do it with more pace and more commitment. So it’s not about moving fast and getting it wrong. It’s more commitment to the agenda.”

But the agenda, for Donnelly, is about much more than updating tools and practices. It’s about resetting the very ethos and structures of the sector. “If you think about the sorts of businesses that are likely to come out of post COVID, there are likely to be all sorts of models that will impact on education and skills and how it’s delivered. If we don’t seize on these opportunities to adapt the sorts of organisations we are, someone completely new will come into the space, because they will be unshackled by the dominant logics we all have.”

We all want to be successful, and to find new models you have to go to a blank sheet

And the organisation Donnelly is now leading from the front is no exception. City & Guilds is 142 years old, the world’s largest vocational awarding body, and a prime example of an organisation with a ‘dominant logic’. A deeply embedded one too. “It can’t not because of where it’s come from. Introducing digital credentials may not sound dramatically different, but ultimately I think digital credentials could overtake the requirement for having a traditional qualification. Well, actually saying that is quite radical because that’s treading on the toes of that dominant logic about what awarding and assessment actually means and needs to look like. But I think we all want to be successful, and to find those new models you have to go to a blank sheet.”

Donnelly has been steeped in e-learning and digital education for a couple of decades now, and her success in becoming City & Guilds’s first female chief executive owes as much to her vision as it does to her perseverance. No techno-evangelist, she has clearly processed the decades of edtech promises and false starts into an optimism tempered with a healthy dose of realism. To realise technology’s potential, a number of other factors have to fall into place – factors the current crisis is bringing to the fore.

“It’s a fairly simple value chain cycle. We recruit, we diagnose, we train, we assess, we certify.  Whether they are an apprentice or a full-time learner, ultimately, that’s what we’re trying to do. If you work out what role you want to play in that value chain, and how you can digitally enable and blend some of that, and how that fits in the broader ecostystem, that’s your blank sheet.”

But the blank sheet approach carries risk, not least of which is the threat of forgetting where you’ve come from, and your purpose. For Donnelly, it’s a question of imagining “that you are an organisation that doen’t exist today but wants to exist tomorrow. What is it you would create? Then somehow you’ve got to retrofit in the good things about the fact you’ve got DNA, and you’ve got a history and you’ve got capabilities and skills, but not let that overtake the new thinking that you’re going to want to enable.”

Another is the possible disruption of the sector by new players, “unshackled” not only from dominant organisational logics and perhaps even from its dominant ethical ones too.

“A piece of work carried out in 2015/16 came up with a quote that the largest the largest internet business in the world by 2030 will be education. I’ve been coming back to that quote in my head recently, because I think post-COVID that is actually even more likely to happen. It’s not likely to be one single player, although it could be if you think of the Googles of this world and the dominance they have. We all need to be very cognizant of that.”

It’s clear from our conversation that Donnelly’s leadership will be characterised by much more than gaining a competitive edge over rivals. To beat back the risks associated with the necessary aspects of digital disruption and to safeguard its “DNA”, her view is that the sector’s response to this critical period must be defined by collaboration. 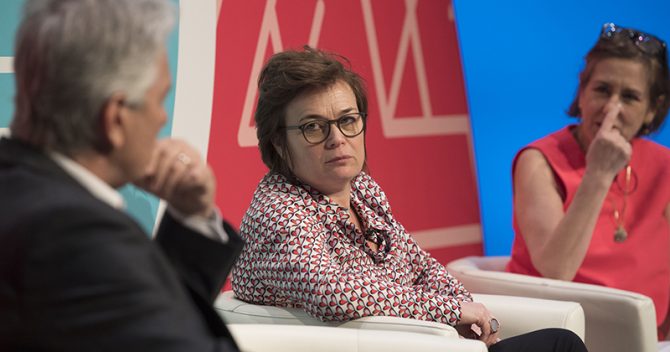 “I’d like to shift the pendulum and say [online assessment and proctoring] ultimately becomes our hundred percent goal. Not in a year, but I want to push very, very hard on that. But I want to try and share some of that with the market as well. It’s about wanting to put back into the ecosystem.”

The word ecosystem is one she returns to time and again, and it’s a view that also shapes her wider policy agenda. What the government should be focusing on is healing the divides of a fractured system, and rebalancing the equilibrium between local and national decision making.

“I think it’s particularly acute in FE. The government pick us off, because they see it as sort of a gap to drive through the middle something they want to happen that isn’t necessarily in the interest of the sector.”

She’s far from the first to suggest it, but Donnelly thinks the sector needs less of the political pendulum swings and more stability. For her, that comes through longer-term spending commitments, but also through reimagining central government’s role, not at the top of the ecosystem, but as another player in it.

There’s a schizophrenia at the moment

“There’s a schizophrenia at the moment. They seem to be saying – and Boris himself as PM and given this backdrop as mayor has always had that sense – that more should be happening at the devolved, regional and local levels. But the reality is that policies still aren’t there to enable that to happen. We need central government to become much more as a supporting enabler, to identify the really good practice that we need to bring up to a national level or to make sure it gets flushed back out to other regions.”

Of all the shocks rattling FE and skills, our conversation hasn’t even touched on the climate crisis. In a sense though, Donnelly isn’t a leader in a technological or industrial revolution, but an ecological one. Sustainability pervades her thinking.

“You could never take on becoming a CEO in the skills sector without having a high degree of wanting to create a better place, and a better sense of the purpose that you hold. Here we are. 142 years old, in our fourth industrial revolution and probably marching to our fifth. For me, it’s about creating the legacy of the CEO who enabled the change to happen so that someone asking about this crisis in another hundred years’ time can say ‘Good. They made that change at that moment’.”

It’s perhaps cliché, but not less true for it, that we are living history. With leaders like this, the future of the sector seems brighter, and the darkness of the moment less oppressive.