Funding bands for another 17 apprenticeship standards under review by the Institute for Apprenticeships have now been approved – with the majority experiencing a reduction.

A total of 30 standards have been under review since December. The first 10 had their funding rates approved in May.

For the latest 17, changes for those that have had their funding reduced will come into effect for apprenticeship starts from September 30, 2019, while those that have increased will have their new funding band implemented for starts from today (July 1).

Six funding bands remained the same, while 10 had their funding reduced.

In May 2018, the apprenticeships minister Anne Milton asked the institute to conduct its first ever review of funding bands, which included 31 existing apprenticeship standards.

This led to several standards having their funding cut, including the popular chartered manager degree apprenticeship by £5,000. This was followed by another review of the funding bands for 30 standards in December 2018.

Commenting on the latest approvals today, a spokesperson for the institute said: “The Secretary of State has approved our funding band recommendations for a further 17 of the 30 standards that have been under review since December 2018.

“The aim of the review is to ensure these standards have the most appropriate funding band to support high quality delivery, and provide value for money for employers and taxpayers. They will also ensure consistency in the way older and newer standards are funded.”

Three funding band recommendations still have to be approved from the December 2018 reviews.

The IfA said it expects the full review to be completed this summer. 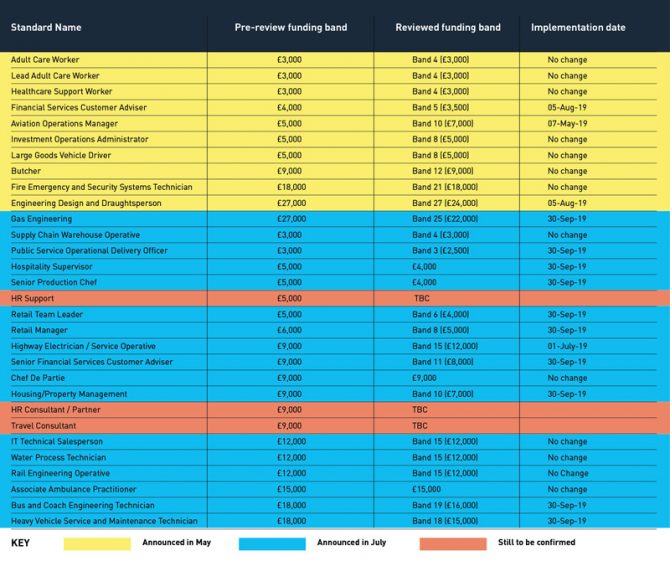