The popular chartered manager degree apprenticeship standard will have its funding slashed by £5,000, the Institute for Apprenticeships has confirmed.

The results of the IfA’s controversial review of another 17 standards (see table below) have been released, and it spells bad news for the popular management apprenticeships and the employer groups who had joined forces to appeal any funding cuts.

The employer group behind all three management apprenticeship standards, led by the Chartered Management Institute, launched an appeal to overturn plans to slash the funding bands. However, today’s announcement shows this did not succeed.

Rob Wall, head of policy at the CMI, said the cuts “will damage the market for a management apprenticeships, stall critical investment in management development and undermine efforts to boost UK productivity. The more intensive programmes that support young people and drive social mobility will be the hardest hit.”

He added: “Over 100 employers wrote to highlight the impact that cuts will have, and indeed have already had with some apprentice recruitment programmes put on hold. Today’s announcement shows that ministers are not in listening mode, and is another nail in the coffin of an employer-led skills system.”

Another popular management apprenticeship, the level four associate project management standard, will have its funding cut by a third from £9,000 to £6,000 despite a campaign from the Association for Project Management against the cut.

Debbie Dore, chief executive of the Association for Project Management, warned the cut to the associate project management standard would lead to “the end of this high-quality offering” and described it as a “profoundly disappointing development”.

“The employers group for this apprenticeship standard has been clear that a quality offering could not be delivered at this reduced price and we expect that most employers and providers will now withdraw.

“What makes this decision more perplexing is that this apprenticeship has been increasingly popular and successful with employers in the public and private sectors alike. Apprenticeships are supposed to be employer-led, yet in this case the views of employers have been completely disregarded.”

A spokesperson for the IfA said the priority had been to ensure standards “have the appropriate funding band to support high quality delivery and provide value for money for employers and the taxpayer, whilst ensuring consistency in the way older and newer standards are funded.

“Throughout the process, we have worked collaboratively with trailblazers to ensure the review was carried out in an open way and have worked hard to resolve any concerns about changes to funding levels.”

Today’s announcement follows the 12 changes announced in October. Of the standards announced so far, 21 are set to receive reduced funding. Two standards – aviation ground specialist and senior healthcare support worker – will receive big increases. The aviation ground specialist standard will have its funding doubled, from £3,000 to £6,000, while the senior healthcare support worker standard will rise from £3,000 to £5,000.

Six standards will not see any change to their funding, and two – digital technology solutions professional and motor vehicle service and maintenance technician – have not yet had a decision made on their fate.

The IfA announced in May it would look at the funding given to 31 standards, at the request of the Department for Education.

At the time, FE Week analysis showed that 21 of the 30 standards with the most starts in 2017/18 were among those being reviewed.

Earlier this month, it was announced that a further 30 funding bands would face review. All changes are finally signed off by the education secretary, Damian Hinds. 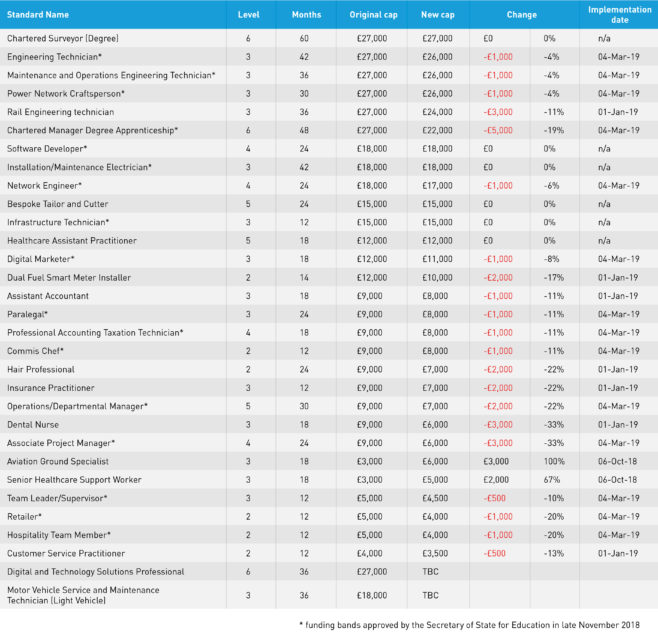