Levy-funded apprenticeships at higher and degree-level jumped by a whopping 424 per cent in September, according to the latest experimental Department for Education statistics.

The figures, based on commitments made through the apprenticeship service since May, suggest that the sudden rise of management apprenticeships is not slowing down.

Commitments at higher or degree apprenticeships – those at level four and above – shot up by 3,140 from August’s total of 740 to 3,880 in September.

While commitments at all levels were up by 153 per cent, the 424-per-cent rise at level four and above dwarves that at lower levels.

As a result, higher- and degree-level apprenticeships now make up a far greater proportion of the total commitments, from one in 10 between May and August to almost one in five.

These figures will fuel concerns that the apprenticeship levy, which kicked off on May 1, would encourage businesses to fund management courses for existing employees rather than offering lower-level apprenticeships to young people. 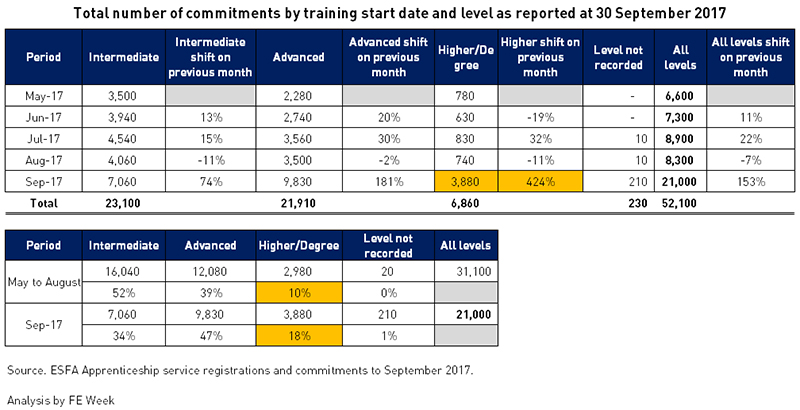 It’s not clear which standards or frameworks these commitments relate to, as that information isn’t included in the statistics.

However, the most popular higher or degree level standards in 2016/17 were both management courses: level five operations/departmental manager, and the chartered manager degree apprenticeship at level six.

And FE Week reported last month that management had soared in popularity to become the second most popular framework in 2016/17.

Degree apprenticeships were first launched in September 2015, but have only been eligible for funding since May.

Peter Lauener, the interim chief executive of the Institute for Apprenticeships, told the public accounts committee last month that businesses had been expected to use the levy to pay for higher and degree apprenticeships – which he described as a “rapidly growing element of the programme”.

“It’s certainly the case that that levy-paying employers can use their levy to pay for degree apprenticeships,” he told MPs.

The institute had “done a lot of modelling”, he added, which included “an expectation that there would be an increasing number of degree apprenticeships in the system as a result”.

Of the 195 standards currently approved for delivery, 65 are at level four or above.

The first phase of the fund, announced in 2016, provided £4.5 million across 18 projects, involving 35 HE institutions and 20 FE colleges, to support up to 5,200 new degree apprenticeship places from September.

The second phase, announced by the education secretary Justine Greening at the Conservative Party conference last month, awarded £4.9 million to 27 projects, to develop a further 4,500 degree apprenticeship places by September 2018.

The apprenticeships service is the online system that levy-paying employers use to manage their funds, including registering “commitments” or apprentices, and paying for training.

Currently only large employers that are subject to the apprenticeship levy – those with an annual wage bill of at least £3 million – can use the service.