Technical qualifications “must be a route to the top” to bridge the divide between graduates and non-graduates, a new Social Market Foundation essay states.

The think tank has this week published ‘The education divide is about disrespect: why it matters and what graduates should do about it‘ by Baroness Tina Stowell, a Conservative member of the House of Lords.

A former Cabinet minister under David Cameron, Stowell writes that the government “ramping up” technical and vocational education will only “assist in bridging the educational attainment divide if it is not seen as a consolation prize for those who do not go to university.

“It also has to be a route to ‘the top’,” she says, as employers find people who have not taken the academic route are “incredibly valuable”.

This, she said, is because: “They read a situation and the people involved and can often spot more quickly the cause of the problem that needs fixing, or identify the real need to be addressed.”

This comes as the government is pouring £2.5 billion into a National Skills Fund to create an entitlement to a first, full-level 3 qualification for adults and open technical skills bootcamps nationwide, training the employed and unemployed in areas such as digital and construction.

‘Deficit of respect’ between graduates and non-graduates could create ‘turmoil’

Stowell’s report criticises the social gap between those with university degrees and those without, arguing there is a “deficit of respect” for the views of those without a degree.

The report is based on a speech she gave in the Lords in 2019, warning that events such as the Brexit referendum “all exposed educational attainment as the biggest, most significant divide in our society”.

A quarter of postgraduates voted to leave, whereas over two-thirds of those with no qualifications did so, the essay reads.

Without action to improve the respect for people without degrees, Stowell thinks: “We’re going to have to get used to that kind of turmoil.”

That is “unless the graduate class decision-making powerful and influential people really understand what is driving that division and put right where things are going wrong.”

At the report’s launch on Tuesday, Stowell expressed her belief that organisations such as political parties and trade unions have been so slow to reorient themselves to better represent non-graduates because “they define success in their own image”.

Following last week’s reshuffle, social mobility charity The Sutton Trust reported that over a quarter of cabinet members attended a fee-paying school before an Oxbridge university.

That’s despite the i newspaper finding Boris Johnson’s cabinet is now more diverse than any of David Cameron’s or Theresa May’s.

During the launch event, Stowell highlighted how accountancy firm KPMG has promised 29 per cent of its staff will have “working-class backgrounds” by 2030.

“If all of those people who come from a working-class background have been through university, KPMG is not going to look any different to what it looks like now,” Stowell warned.

SMF director James Kirkup, who chaired the event, said that he could still not remember anyone without a degree applying for a job at the foundation. He felt that he “should do more to try and cast our recruiting net wider to people who did not go to university”. And after the event, he told FE Week that the SMF is “always looking for new ways to promote vacancies to a wider pool of applicants.

“I’d welcome thoughts from FE Week’s readers on how best to do that.”

Kirkup said the foundation is interested in the issues Stowell raises because they want a “more harmonious society”.

Also, people who have a vocational and technical education “deserve more attention and respect from the people who make policy and help set the national conversation”. 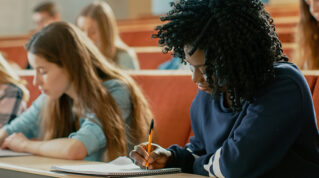