Six per cent of adults with learning disabilities are in paid employment – something that specialist colleges are working hard to redress through their own enterprises, supported work experience or supported internship programmes. FE Week visits two Leicestershire colleges to see how they’re going about it

I meet Tracey Forman at the Barrow of Treats café, a four-table eatery that serves baked potatoes, sandwiches and omelettes on the high street of the village of Barrow upon Soar.

Isaac carefully records our order on an iPad that uses pictorial representations, something that makes it accessible to most students from the nearby Homefield College.

We don’t have many traditional classrooms; we are about accessing the community

Those students might work in one of 14 sites – including a sweet shop, internet café and various houses – that make up the Leicestershire college that educates 73 students with social, emotional and mental health needs.

“We don’t have very many traditional classrooms because we are about accessing the community,” Forman explains. “We don’t tend to do a whole lot of formal qualifications. We will do things that will let students access the community or access employment, or move them nearer to employment.” 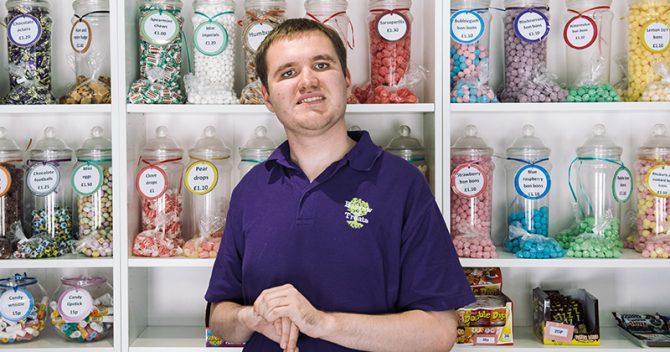 “The employment rates are still far too low for people with learning difficulties,” says Clare Howard, the chief executive of the National Association of Specialist Colleges, when we chat about what I’ve seen in Leicestershire.

“There is an issue around the culture of making sure that we are demonstrating that this group of students could be really good for the economy, and we’ve got to demonstrate to employers how valuable that is.” 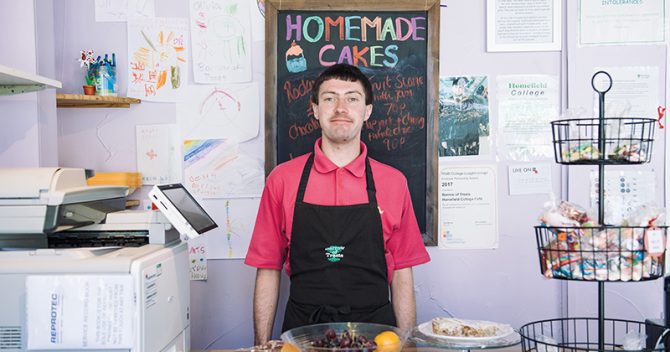 Back in Barrow, in the sweet shop across the road, 19-year-old Robert has just packed up 20 cellophane party bags with brightly coloured sweets. He’s had to calculate and count out a pound’s worth for each bag, and is now sitting at the work table facing away from the shop door, his cone-shaped creations piled high.

“Somebody who didn’t know about us would just come in and see Robert sitting there, and think, ‘What’s he doing? Why is he there?’” Forman says. “Whereas he’s somebody who needs a break every so often.

“The challenge with enterprises like this is how do you make it a good experience for the customer, while not forgetting that it’s a learning experience for the student.”
Robert doesn’t serve customers, but some students are being trained do just that.

“Even if you came in and said, ‘Can I have a cup of tea?’ they’ve got to follow that on with, ‘Would you like sugar, would you like milk?’” she says. “It’s about communication. Some of them won’t answer a telephone, but that’s what we work towards – answering the phone and passing messages on. Because it’s work skills – if you’re going to work
in a work placement or get a job, this is what you need to be doing.”

Page, who is also studying part-time for her diploma in education and training at Loughborough College, has worked at Sip and Surf since it opened nine years ago. Touch screens have revolutionised how much her students can do – they can now all use the till, for instance, and set up the designs for the mugs and mats they print. 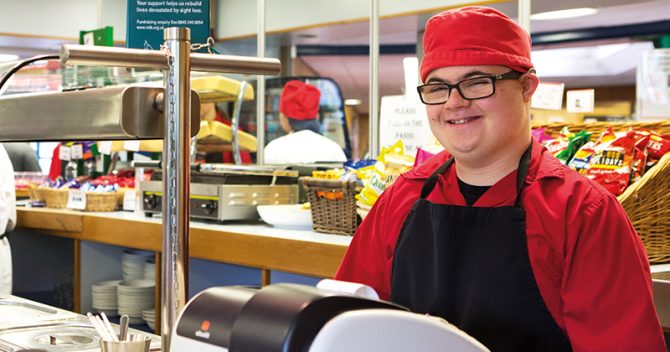 Watching the transformation of some students can feel like watching the TV show Stars in their Eyes, Page says. “They walk through the door not knowing, and then they can go through the door at the end of the three years and they’ve learned all these work skills that they can take away and use in a workplace, in voluntary, whatever. And you know that you’ve helped them achieve that.”

As well as practising at the college’s own training businesses, students do work placements with businesses in the community. So how many students go into paid employment when they leave?

“The number is still very small,” Forman says. “Some of them could work, but the work placements don’t always turn into paid work.”

There’s no national reporting of destination data for the 4,200 learners in specialist colleges, with most learners remaining at pre-entry level, entry level, or level 1.

Their destinations, Howard says, are likely to be split between general FE college – having used specialist college as a stepping stone from a special school – supported living (in which case the specialist college will be training them to be independent) or into voluntary or paid work.

Those with more complex needs or health needs, or who are unable to work, will go into social care, “but we’re hopeful that the education they’ve had in college will enable savings on the social care budget,” she says.

A National Audit Office report in 2011 concluded that supporting one person with learning disabilities into employment could reduce lifetime cost to the public purse by about £170,000 and increase their income by between 55 and 95 per cent.

The estimated savings for the social care budget are about £1 million a person if adults destined for residential care are trained and supported to live in more independent housing.

Sip and Surf also functions as a drop-in centre for staff and students, which can be useful as students often travel to Loughborough with a support worker to go for lunch at Weatherspoons. Forman, sensing my scepticism over whether this kind of activity really counts as education, counters with a story of a parent who told her that what she really wanted for her son was to have lunch together in a pub.

That means, she says, that the young person must learn how to travel independently on public transport, function in a busy public place, read a menu, order food, count money.

“Sometimes they will arrive with us in one location, only to go off on a train somewhere because that’s the lesson for the morning. So it doesn’t take place in a room.

“For us, going somewhere to do something is part of your preparation. As you will know in your work, you do have to go places, don’t you? And you have to learn how to do that. So that’s why our strapline is ‘achievement through experience’, because everything we do is part of the learning.”

The government’s supported internship programmes, which started in September 2013, are aimed at getting more people with disabilities into work through personalised learning programmes. About 700 people are now on these internships, either through an FE college or the local authority.

“We were built here specifically to work alongside the mainstream college,” says June Murray, the principal, a move she describes as “very progressive, very innovative” when it was founded in 1989. At the time, blind and partially sighted students might have done their A-levels in the mainstream college, with the RNIB providing additional life skills and specialist skills training.

The RNIB college now educates students with a whole range of disabilities, as a result of the shift towards the “presumption to mainstream” introduced in the Children and Families Act 2014, and an emphasis on local provision.

Murray sees this as a good thing, as long as the right kind of additional specialist support is still available: “We’re looking at student choice here, and there are a number of young people who are choosing to be in their local college, stay at home in their own community. That’s a positive thing. Providing, of course, they’re going to get the kind of wraparound support that they need.”

Unlike Homefield, RNIB operates from a traditional college campus, but it also places a strong focus on work readiness. Students can choose to work in one of the college’s five “enterprises”: the office, which provides photocopying and letter packaging services for internal and external clients; the arts centre, which makes crafts to sell; the media hub, which has recently been commissioned to create a video on people with autism for the local police authority; the Bell Bar college canteen; and Sell4U, where students process items to list for sale on Ebay in return for a percentage of the profit.

Students also do long-term work placements of two hours a week over their first two years, where they are accompanied by a learning support assistant.

Gina Hufford is the work placement officer for RNIB College and part of her job is to convince employers of the benefits of taking on students. “Obviously you do get hesitations,” she says, “and a lot of the hesitations are around their time – how much of their time is going to be taken up. But the students do go supported so it takes that pressure away from them, because they don’t need to have a buddy all the time.”

What incentives can Hufford offer the employers to invest in the programme?

“There is none really,” Murray says. “Except for the fact that we build the relationships up with them and we help them to understand that we will be very supportive. And it’s a kind of social commitment. So when you get an employer on board, they’re hugely enthusiastic. What there is, is, ‘If you give this young person a chance, we think they could be a good employee for you later’. And they are!”

Occasionally a student will move on independently. One, for instance, went on a work placement at Costa Coffee last year and is now on a supported internship with the same employer.

Supported internships, Murray says, “in very crude terms” are the equivalent of an apprenticeship for people who aren’t able to complete a standard apprenticeship. It involves one day in college studying maths and English, and two days with an employer – again accompanied by a learning support assistant.

“Obviously on the internship we want that support to be gradually pulled away,” Hufford says, “We’ve highlighted these students as able to go into paid employment, so they’re not going to have someone there all the time. Throughout the process the support kind of pulls back.”

The ideal outcome of a supported internship is that at the end of the year, the employer will take them on as a paid employee, something that is communicated from the start.
Of the five supported internships run by RNIB College last year, two led to part-time employment – about four hours a week cleaning tables at McDonalds and helping customers with queries. “That was suitable for the employer and more than enough for the students as well,” Hufford says. “There’s no stipulation on how many hours they need; it’s just an outcome for the college that we’ve got someone into paid employment, which is amazing.”

Nineteen-year-old Robbie has been competing in gymnastics for several years and wants to work in the sport. He is doing his supported internship at Hinckley Gymnastics, where he learns about setting up the equipment, helps to runs sessions, and cleans the communal areas. The club is in conversation with a provider to try to build a bespoke apprenticeship for Robbie through British Gymnastics.

We don’t want inclusion linked to the word mainstream, we want it linked to integration

These are all great examples of inclusion, Howard says, who is keen to insist that being in a specialist college doesn’t mean you’re not included in society.

“Inclusion means a lot of other things than being in mainstream. It means the sorts of things you saw at Homefield. If you look at Barrow of Treats – that’s a specialist education, but they are completely integrated within the community. So we wouldn’t want the word inclusion linked to the word mainstream, we’d want it to be linked to integration and making sure that people are well supported into their adult lives and being able to make contributions to the community. You can do that within a specialist college just as well, if not better, than you can within a mainstream.”