The government has said the names of colleges receiving emergency cash support must be kept a secret so as to avoid “disadvantaged learners” missing out on being educated.

The Department for Education included this claim in a host of reasons why it will not name five colleges that received emergency funding earlier this year, in response to an FE Week freedom of information request.

The response to the request said identifying the colleges could lead to a “loss of confidence in their ability to provide sustained education, and this would be likely to result in fewer students applying to the college for their courses.

“Given the additional travel required to study elsewhere, some disadvantaged learners would be likely to choose not to undertake any education at all.”

Essentially, the DfE is conceding that disadvantaged learners would have no alternative education provider were the college to stop delivering courses.

Despite their reticence in publishing the names of colleges that receive bailouts, the DfE regularly publishes the FE commissioner’s intervention reports and Education and Skills Funding Agency financial notices to improve for individual colleges, which include details of their financial situations alongside recommendations.

The DfE also claimed, in the response to the FOI request, that revealing the colleges’ names “might jeopardise any negotiations of upcoming contracts with their suppliers” and “would likely result in significant additional burdens being placed upon their resources, with the need to manage media attention, parental concerns and the potential loss of/difficulties in recruiting staff.

“This would limit their ability to effectively provide further education, harming the outcomes of learners, which would not be in the public interest.”

FE Week submitted the FOI after skills minister Gillian Keegan told parliament in September that five colleges had needed “financial assistance”. In its response, the DfE did reveal that the colleges had been handed a total of £9.6 million between April and August, with one college receiving £5.3 million over June and July (see table below).

The ESFA’s director of provider market oversight, Matthew Atkinson, told the Commons’ Public Accounts Committee last month that 64 colleges were currently at risk of running out of cash, and the government was likely to spend £70 million on emergency funding for colleges in total this year – which he said was “more than we thought”.

College leaders were themselves “staggered” when another FE Week FOI request revealed in January how four colleges had spent £111 million they had received as part of secretive “Fresh Start’ deals with the government, with money going towards IT equipment and writing off government loans.

An increasing number of college bailouts have been handed out in recent years and have ultimately led to the introduction of the college insolvency regime, which was used for the first time when the Hadlow Group of colleges collapsed last year.

But Atkinson admitted to the education committee these insolvencies will still cost the taxpayer over £60 million, with £6 million going to accountants alone – a figure DfE permanent secretary Susan Acland-Hood called “gut wrenching”.

Yet the government has actively worked to stop the names of colleges that receive bailouts coming to light, changing its oversight policy in October so colleges that apply for emergency funding will not automatically fall into formal intervention.

The DfE withheld the information under section 43 (commercial interest) and section 36(2) (c) (would be likely otherwise to prejudice the effective conduct of public affairs) of the Freedom of Information Act 2000.

FE Week will be referring the decision to withhold the college names to the Information Commissioner’s Office. 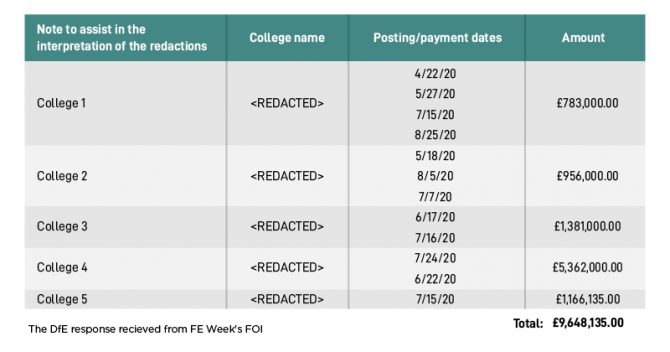