The Careers and Enterprise Company has released new analysis showing how post-16 providers are faring against the eight Gatsby benchmarks.

It is a follow-up to the quango’s “State of the Nation” report put out in September that showed colleges’ and schools’ progress in meeting the markers of excellence in careers guidance had “accelerated”, after they achieved an average of three in 2018/19, compared to 1.34 when they were first measured in 2014.

Today’s publication details how many of the benchmarks have been achieved, partially achieved or not achieved, specifically by the 262 FE providers using the CEC’s Compass tool, which measures a provider’s progress against the standards.

The report breaks it down by 154 general FE colleges, 85 Sixth form colleges (including 16 to 19 academy converters and free schools) and 23 special post-16 providers.

FE providers were previously warned by the Department for Education they had to meet the benchmarks by the end of this year or risk incurring financial penalties.

A greater proportion of sixth form colleges have achieved this standard than either general FE or special providers.

But over 90 per cent of colleges reported they have a careers programme written down that has “explicit backing” from their senior leadership team.

Programmes were published online by 75 per cent of colleges. 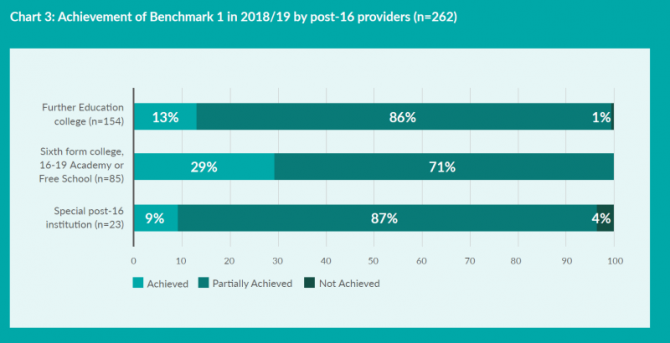 Sixth form colleges were more likely to have positive outcomes than the other provider types, with 66 per cent of them having achieved this benchmark compared to 43 per cent of general FEs. 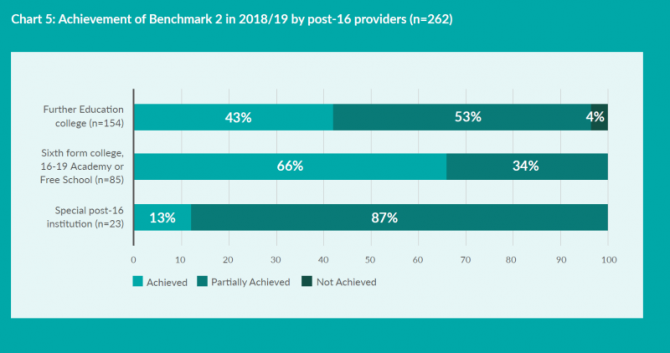 Benchmark 3 – Addressing the needs of each learner

Post-16 providers are trumping secondary schools against this benchmark, which encompasses factors such as whether colleges support learners towards positive career destinations.

Ninety per cent of FE colleges and 97 per cent of sixth forms report they maintain accurate data on learner destinations for three years after they leave college, which is an area the report says secondary schools “struggle with”.

General FE colleges outpaced sixth forms and special institutions on this benchmark with a 67 per cent achievement rate.

All staff need to link curriculum learning with careers to meet this benchmark, and 81 per cent of colleges reported the majority of their learners learn about the relevance of their subject to future careers through the curriculum. 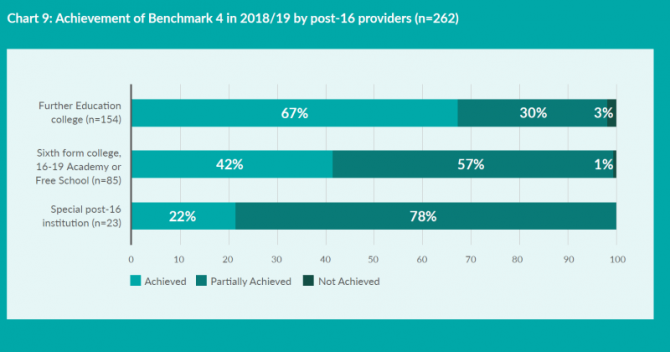 Benchmark 5 – Encounters with employers and employees

Research quoted in the report shows learners who have regular encounters with working people, at careers fairs or enterprise competitions, have better labour outcomes.

Colleges have improved on this benchmark from last year: 81 per cent ensured all or most learners have at least one encounter in 2018/19, compared to 67 per cent in 2017/18.

But it was specialist colleges that fared best in this standard, where 44 per cent had achieved. 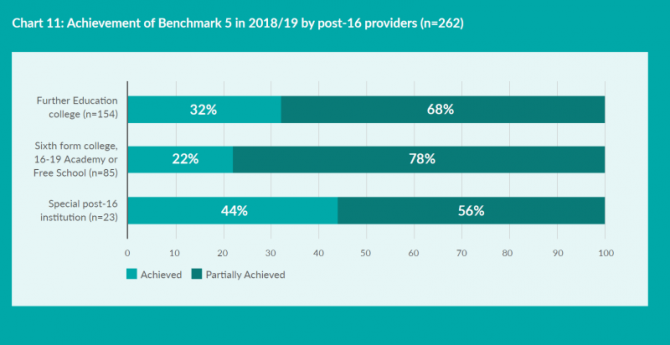 Special institutions excelled here again, with 74 per cent having achieved the benchmark; which says every learner should have first-hand experience of a workplace.

But there was a marked variation between provider types: 58 per cent of colleges also achieved the benchmark, compared to just 26 per cent of sixth forms.

General FE colleges came off poorly here: learners were more likely to have meaningful encounters with other FE, apprenticeships and HE providers if they went to sixth form.

Special post-16 institutions were also lagging behind SFCs: just 13 per cent have achieved the benchmark compared to 38 per cent. 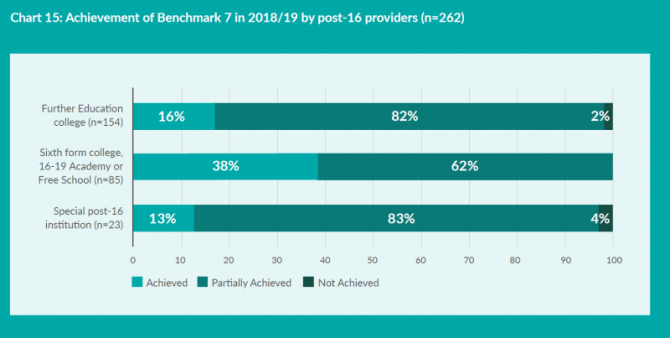 Over 90 per cent of general FE and sixth form colleges reported they had made interviews with a qualified careers adviser available to learners, as the benchmark demands.

But the report warns not all learners may take up the opportunity, and there may not be enough careers advisers for all learners to receive an interview.

“College leaders and staff are pursuing the careers education agenda with energy and enthusiasm.

“The positive progress they are making is delivering real results for students – broadening opportunity and improving life chances.

“It is encouraging to see the changes made to shape the system to fit the college context is reaping rewards for the sector and their students. Engagement is growing and execution picking up pace.”