Total apprenticeship starts for May, June and July fell a staggering 61% compared to the same period last year.

Provisional figures published by the DfE this morning, as part of the Statistical First Release, include the apprenticeship starts after the levy system began on the 1 May. 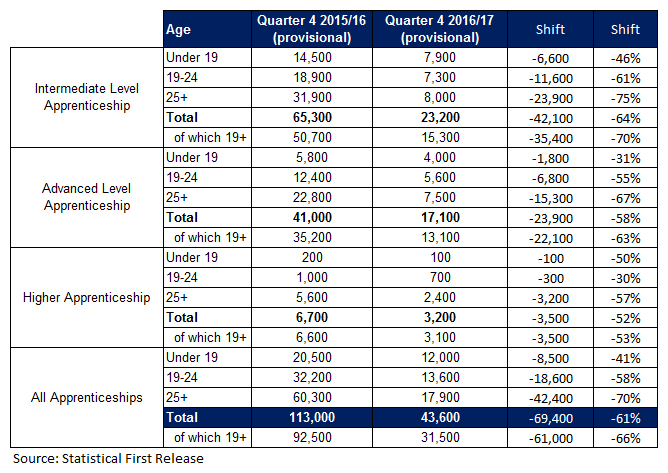 All apprenticeship starts from May (with the exception of 16 to 18 year-olds at employers with fewer than 50 employees) will have involved, for the first time, a mandatory financial contribution from the employer, either from the levy account or the 10 percent co-investment.

Responding to the dramatic fall in starts since May, a Department for Education spokesperson said:“Our apprenticeship reforms have put control back into the hands of employers so they will gain the skilled workforce they need to compete globally.

“We know that the last year has been a period of huge change for employers but it is right that they are taking their time to plan ahead and maximise the opportunities the apprenticeship levy can bring.”

Mark Dawe, chief executive of the Association of Employment and Learning Providers told FE Week: “Sadly we saw these numbers coming long before the levy even started because of the way the new funding system has been designed.  Until we see the September starts, we don’t know whether the three million target is under threat but the numerical target isn’t really important here.  What is needed are changes that will restore incentives for employers to recruit young apprentices and a guaranteed minimum budget for non-levy payers’ apprenticeships which will ensure that there are opportunities in the many areas of the country without large employers.

“AELP is receiving plenty of anecdotal and factual evidence from its members that the government’s own social mobility agenda is being undermined by the levy reforms with fewer lower level apprenticeships available to offer a ladder of opportunity and the damage is also being done in sectors that are crucial for the post-Brexit economy such as hospitality and health and social care.

“We therefore need a proper debate about future funding systems and approaches in anticipation of the levy being used up by levy payers.  This has to take a hard look at the barriers which are putting off employers from taking on apprentices such as the level of financial contribution required from them and the amount of time mandated for off-the-job training within an apprenticeship.”

And Neil Carberry, managing director of people policy at the CBI tweeted this:

This was followed by a statement in which he said the “disappointing data” would “come as no surprise to companies, who have repeatedly made clear that the current design of the apprenticeship levy system is not effective”.

“Businesses believe in apprenticeships but there can be no argument now –  reform of the levy system is needed urgently to ensure its success,” he said.

And shadow skills minister Gordon Marsden had this to say on Twitter about today’s statistics: