More than two in five apprentices on standards failed to successfully complete their qualification last year.

National achievement rate tables (NARTs) published this morning by the Department for Education show that the overall rate for all apprenticeships fell from 64.8 per cent in 2018/19 to 64.2 per cent in 2019/20.

The data shows that apprentices on old-style frameworks, which are being phased out, hit a 67.8 per cent achievement rate, but the new-style standards only achieved 58.7 per cent.

This is, however, an almost 12 percentage point increase on 2018/19 when just 46.9 per cent of apprentices on standards achieved.

The retention rate for standards continues to be low, sitting at 60.2 per cent.

Commentary published by the DfE alongside the statistics claims that a difference in apprenticeship achievement rates between framework and standards is “not, at least initially, an entirely unexpected consequence of our reforms”.

“Whilst some standards do have similar names to frameworks, standards are not designed to be a direct replacement for frameworks and as such, they should not be directly compared,” the document said.

Breaking the data down by subject area, it shows that agriculture, horticulture and animal care had the lowest achievement rate at 50.9 per cent, followed by construction at 52.3 per cent, and then leisure, travel and tourism at 55.6 per cent. 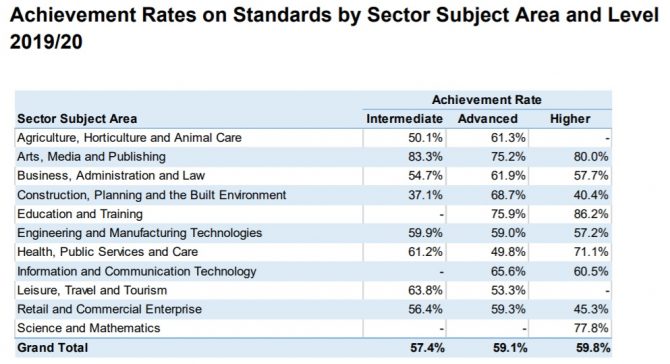 While the DfE has released achievement rate data at a national level for 2019/20, they have not published it at individual provider level or by institution type this year due to the pandemic.

The DfE commentary warned that “care should be taken when comparing outcomes with previous years due to the effects of the pandemic”.

“A number of things will have impacted these data. For example there was an increase in the number of breaks in learning for those with 2019/20 expected end dates in which we can observe a large number of outcomes being delayed until 2020/21,” it added.

Responding to today’s figures, a DfE spokesperson said: “Our reforms to apprenticeships have made them longer and better, with more off-the-job training and a proper assessment at the end. As more and more apprentices are on the new, more rigorous standards, we are pleased to see that the achievement rate for apprenticeship standards has increased by 11.8 percentage points from 2018/19 to 2019/20.

“The recently published FE White Paper outlined the steps we are taking to ensure every apprentice has a high quality experience, including investing in a comprehensive package of professional development available to all apprenticeship providers and their workforce.”