The government will make £78 million available for the rollout of rapid mass Covid-19 testing of students from January 4.

A handbook has today been published by the Department for Education for secondary schools and colleges to use to prepare for the scheme set to launch in just 11 days’ time.

It states that the amount of funding available to a school or college will depend on its size as this will “impact the number of additional staff required to conduct testing”.

A “ready reckoner” has been provided which provides illustrative workforce requirements and associated funding. For colleges it gives the example that a further education college outside London, with 3,000 students and staff will need 30 people working on mass testing and will each receive approximately £35,000.

They will be able to use the funding to cover relevant staffing costs and personal protective equipment will also be directly provided on January 4. 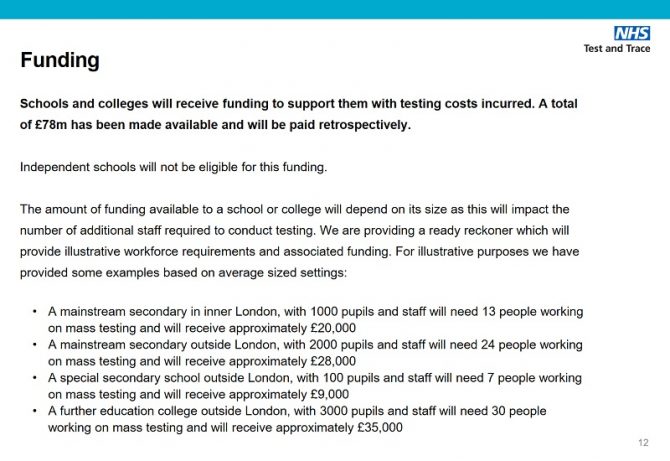 The handbook explains that colleges will need to determine how many staff they need and where those staff will come from, for example existing staff and/or volunteers or agency workers.

There are seven roles that will need to be filled: team leader; test assistant; processor; Covid-19 coordinator; registration assistant; results recorder; and cleaner.

The DfE says military support “will be made available and is designed to make sure that those schools and colleges that require additional help can access it”. 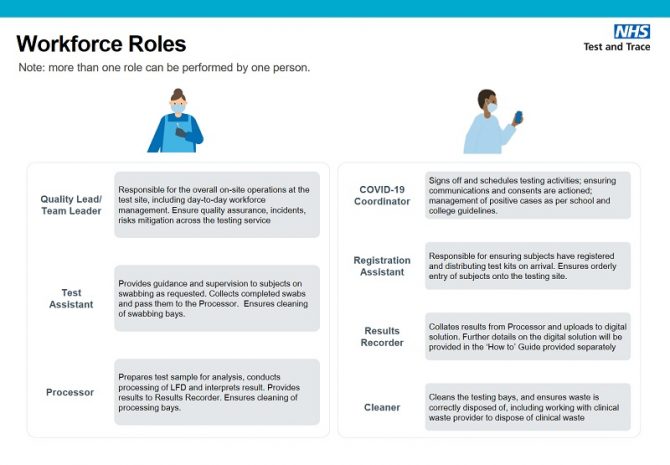 The tests to be administered will be the lateral flow tests – which provide results within 30 minutes. They will be used despite concerns they can miss large numbers of positive cases.

Students will be offered two lateral flow tests spaced three to five days apart, while staff will be offered one test in the first week and weekly thereafter as part of the longer-term routine testing programme.

Anyone with a positive result will need to leave college, take a confirmatory Polymerase Chain Reaction test and follow the self-isolation guidelines – which currently span 10 days.

The handbook includes examples of what a testing site should look like (see image below). 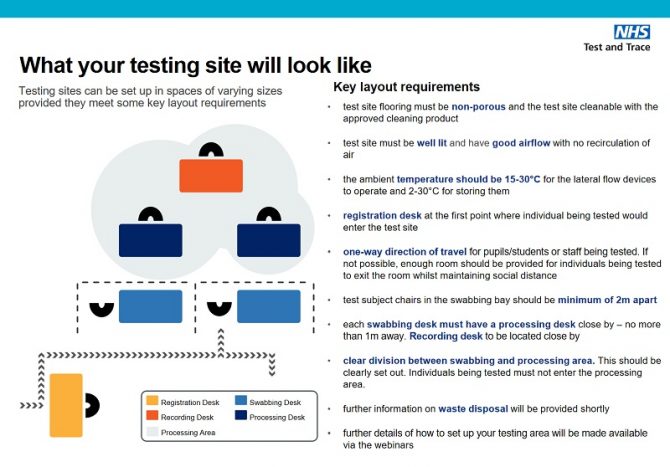 As previously announced, secondary schools and FE providers are currently set for a staggered return to on-site learning for non-exam students after Christmas.

Geoff Barton, general secretary of the Association of School and College Leaders, said today’s updated guidance “doesn’t take us much further forward because it ignores the fact that this plan and timescale are totally unrealistic”.

“It is frankly ludicrous to think that schools and colleges will be able to recruit and train the workforce needed to carry out this testing programme in the 11 days before term is due to begin on January 4, particularly as it is the Christmas holiday period,” he added.

“The guidance gives an illustrative example of a secondary school with 1,000 pupils and staff needing 13 people working on mass testing. How on earth are schools and colleges supposed to have such workforces in place by the first week of the new term?”

Barton continued: “The government seems to be stuck in some sort of parallel universe in which it cannot grasp the huge scale of the task it is asking schools and colleges to carry out.

“Schools and colleges are very keen for rapid Covid tests to be available to staff and students, but the government’s half-baked plan is simply not deliverable.”