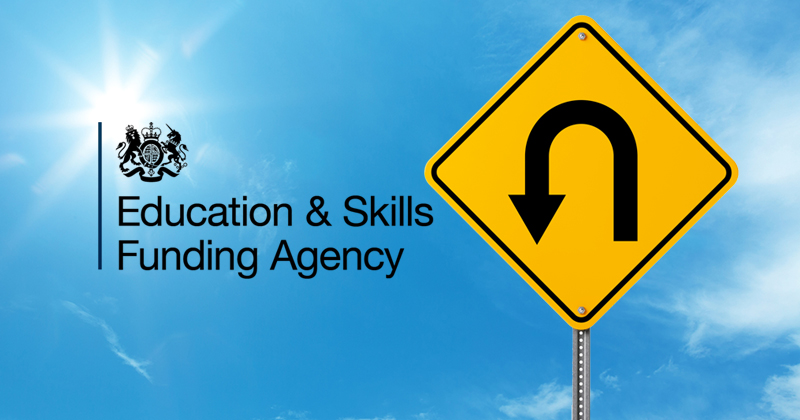 The Education and Skills Funding Agency has announced colleges will be allowed to submit business cases to avoid adult education funding being clawed back.

An update published this afternoon said the agency is developing a process for grant-funded providers to plead as to why they should be given leniency for missing their allocation by more than 10 per cent in 2020/21.

The ESFA had ruled out such a process when they announced the controversial threshold in March.

Grant-funded providers will be allowed to apply for a business case where “local circumstances made it impossible for the provider to deliver at or close to the 90 per cent level and recovery of funds based on the 90 per cent threshold would lead to the provider’s costs of AEB delivery not being covered,” today’s update reads.

Or, if “applying the full amount of AEB clawback would cause significant financial difficulties for the provider”.

ESFA chief executive Eileen Milner said they had “recognised that there is a risk that some colleges will face financial difficulty so we will continue to monitor them, offer early support, and intervene when necessary.

“As part of the support offer, after extensive talks and listening to the sector, we are developing a process to consider business cases through which providers apply for support.

“The process will consider whether local circumstances made it impossible for the provider to deliver at or close to the 90 per cent level and whether recovery of funds based on the 90 per cent threshold would lead to the provider’s costs of AEB delivery not being covered. It will then determine how much (if any) help should be provided.”

AEB reconciliation arrangements will return to the normal clawback threshold of 97 per cent in 2020-21, she added.

Colleges have been up in arms about the threshold being set at 90 per cent in a year when they have still suffered from the knock-on effects of Covid-19.

Leicester College told FE Week in March it was forecast to spend 53 per cent of its £11 million allocation for 2020/21, so would have to hand back 37 per cent up to the threshold.

When business cases were ruled out, Leicester’s principal and former Skills Funding Agency executive director Verity Hancock said she did not “understand the basis for a decision that refuses to recognise the very exceptional position that Leicester College is in, given that it was the worst affected city in the country from continuous lockdowns, and has the largest AEB offer in the country”.

Adult education network HOLEX’s policy director Sue Pember, who previously worked on the DfE’s post-19 education policy as a civil servant, said about today’s announcement: “Although we would have liked the DfE to have accepted that grant providers needed assurance about their funding last year, we welcome this clarity and decision to accept a business cases.

“We hope the process is not over complex and doesn’t put further administrative burden on providers who are now working hard to get learners through assessments and progress on to further learning.”

The Association of Colleges’ deputy chief executive Julian Gravatt said they were “pleased” colleges will be able to submit business cases, as: “The hardline 10 per cent tolerance was never going to be fair in a year disrupted by the pandemic from the outset and now more than ever, colleges need to stabilise their finances.

“The timing will be tight, with colleges given just a few weeks to return financial information, but ESFA’s flexibility is better late than never.”

Shadow further education and skills minister Toby Perkins said the decision had come “so late colleges may well have already made redundancies based on the financial crisis they expected”.

It is expected the process will be set out in early September 2021.

Milner also said the government will still fund delivery up to 103 per cent of providers’ nationally-funded AEB grant allocation.