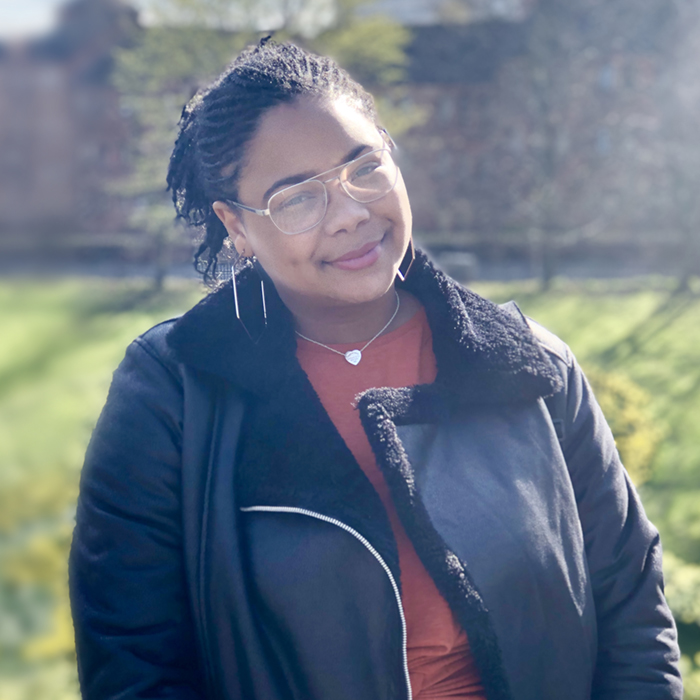 “There’s a paternalisation of FE students”

Almost one year in to her two-year role, Larissa Kennedy, one of the youngest ever presidents of the National Union of Students, explains why she wants louder FE campuses

Larissa Kennedy, president of the National Union of Students, is on a specific mission to increase the voice of FE students, she tells me.

The public may be used to university students going on marches and protests – prompting the ire of a government who now claim free speech is at risk on higher education campuses – but what about further education learners? Can they, too, speak loudly enough that the government notices them?

“We need to empower FE students to have a say in a way that’s authentic to them,” explains Kennedy. “There’s this paternalisation of FE students – this energy that doesn’t centre their agency. We want to turn that on its head.”

Before speaking with me, Kennedy was on a call with FE students at Leicester College helping them to coordinate protest action. The students are worried about the effect of the government’s adult education budget clawback on the college, a measure also currently being opposed by a cross-party group of MPs.

“They are infuriated that the Education and Skills Funding Agency are doing this! They’ve set up a petition and have got more than 5,000 signatures,” Kennedy tells me. “So I’m talking with them about how do we amplify that? How do we get it over the 10,000 mark, how do we get it the attention it deserves?”

She adds: “The question I often ask is, what’s pissing you off? Then we turn that into action.”

The question I often ask is, what’s pissing you off?

The fighting talk could sound blunt and formidable, but Kennedy grins for most of the time she’s speaking and has a way of putting things that makes her sound both passionate and pretty reasonable at the same time.

It may be a result of not being brought up in a stridently political household, but one in which injustices were explored through personal stories: a skill Kennedy herself has inherited. She’s also been on both sides of society in her home stomping ground of Croydon in south London – rubbing shoulders with both the well-off, and everybody else.

“I think perhaps our household was more political than my mum knew at the time, mainly because of the things she was reflecting on to me,” she says. Kennedy’s mother is a teacher and was working in one of the most deprived schools in the neighbourhood, she says. 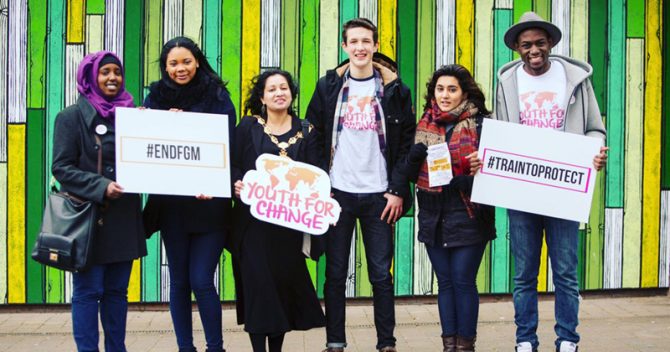 “She told me about having to give apples to kids who were hungry, or having to clean their shirts. She’d explain it was impossible for them concentrate, because they were hungry and exhausted.”

Her father would tell her how, when he’d moved over from St Vincent in the Caribbean, people had thrown bricks at his head as he and others tried to go to school. Such tales set Kennedy ticking on to the power of education, she says.

“It wasn’t an intentional politicisation. But it made me question why people are so afraid of certain groups of people getting access to education. What is in there that people are trying to hide?”

Kennedy is all praise for her primary school years, and particularly about the personal encouragement she got from Mrs Berkeley-Agyepong, her year 6 teacher. “I always loved school, I just loved learning,” she beams. As a small child she’d be found trying to read the newspaper, sometimes retrieved by her mother if the content was considered too stark for a four-year-old.

There’s a West Indies phrase for someone like her, Kennedy continues – a person who is “inner” (although she’s not sure how it’s spelled). “It’s like a positive version of nosy. I want to be able to read everything, want to get into everything.” 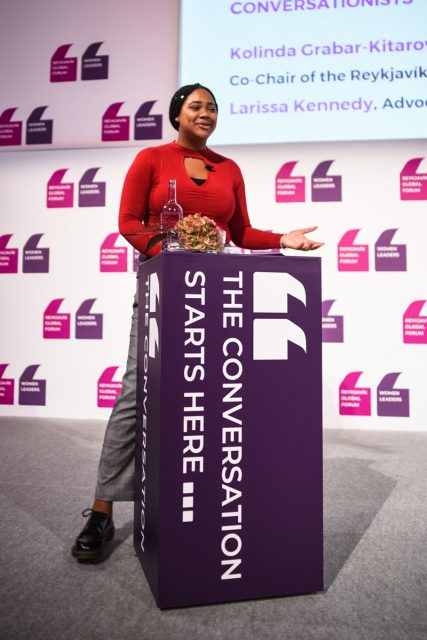 The personality trait paid off, and Kennedy won an academic scholarship, and a bursary place, to Croydon High School, a fee-paying private girls school in a different part of the neighbourhood.

“It was a massively different environment. I saw very starkly the difference between the friends in my area, and the people who were at my school, and it almost radicalised me.

“I could just see the avenues of opportunities were really different for us. At my school we went swimming every week because there was a pool and my friends from home weren’t doing that. We had a library – it wasn’t even just a library, it was called the resource centre.”

When she met her old friends afterwards for chicken and chips, their different days soon became obvious. “I was in four choirs,” laughs Kennedy. She continues more seriously, with a certain frankness.

“It’s something I struggle with. I don’t know if I would be doing what I’m doing now, or if I would have gone to my university, and that makes me wholly uncomfortable. Here I am, campaigning against fees.” She says she adopted a kind of “character” act to fit in during those years.

With French, Spanish and English Literature A-levels under her belt, Kennedy then won a place at Warwick University to study politics, international studies and Hispanic studies. In fact, she’s not finished it. She’s still on a break from her degree, and should strictly be in Colombia for her year abroad. “I miss my degree so much,” she joke-moans. Instead, she moved into student politics.

It wasn’t entirely surprising. Kennedy had already been a spokesperson for Girl Guides in sixth form, heading off to TV interviews during her late teens. She recalls being picked up by Sky News to give interviews before school and would have a “full face of makeup” on ready for 9am. Standing up for a good cause is a muscle she developed very early: her mum put her on the Girl Guides waiting list when she was four.

At Warwick, she became the freshers’ representative for the anti-sexism society, and in her second year, she also became co-president of the anti-racism society.

Then a huge news story broke concerning the university two years ago, shocking much of the higher education sector. The BBC ran a special investigative programme on it: “Inside the Warwick University rape chat scandal”. Young male students were writing horrific things to one another as “jokes” in a Facebook group chat. 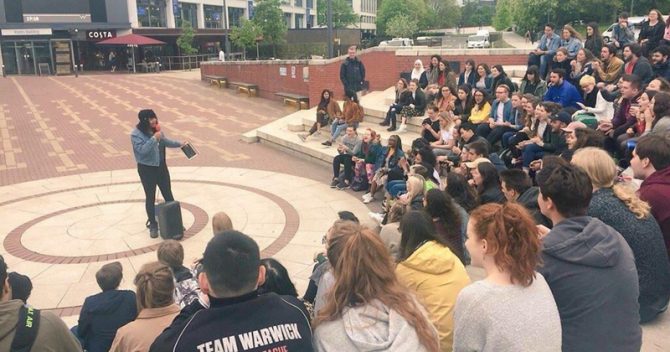 Kennedy speaking on sexual violence at Warwick University in 2018

Comments included “rape the whole flat to teach them a lesson”, as well as fantasies about named female students being abducted, chained up and urinated on. The young men had all given themselves names of notorious serial killers and serial rapists.

Five were banned from the university, two of them for ten years. But when these two appealed, the university reduced the term to just 12 months.

“We were just completely flabbergasted,” says Kennedy. “I spent the entire of second year fighting this, going out, galvanising people.” Eventually, Warwick University launched a review into its disciplinary processes.

By the end of it, Kennedy was well known about the campus and students asked her to take a paid sabbatical role working for the student union. She became education officer and deputy president and during that tenure campaigned to get the university to pay an hourly wage to minority ethnic students contributing heavily to its decolonisation work.

“It was expected that we would continue this work, year after year. The university was using this to make itself more marketable, so why wasn’t it being recognised as work?”

A black female member of staff at the university had said something to Kennedy that really stuck with her. “She said, ‘Don’t make yourself part of the black attainment gap while you’re trying to fix it.’” With this in mind, Kennedy and her team secured pay for those students as official employees of the union. 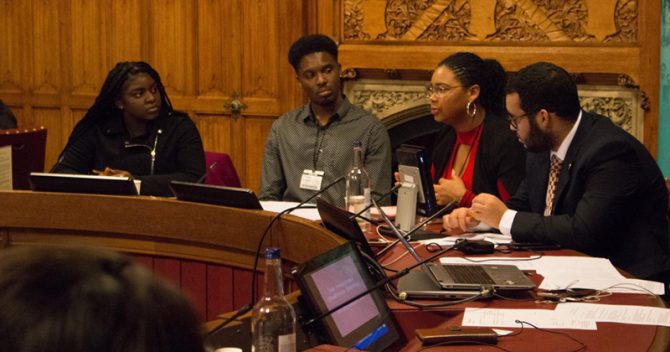 Kennedy then tried to leave student politics, taking a placement with an organisation tackling gender injustice for a year. “I was like, I’ve done my work! I tried to escape,” she chuckles.

But her fellow campaigners rang her up to suggest she run for the president of the NUS against vice president Erica Ramos. Despite having no similar ranking within the NUS, she won the top role and began in July last year.

She also considers herself lucky: she swiped the role at an unusual time for the organisation. The NUS had completed an internal reform process after narrowly avoiding bankruptcy with a £3 million deficit in 2018, and had set itself a new course. One change was that the presidency would now be for two years, instead of one. Aged just 21, Kennedy had won the reins of power for longer than any of her predecessors.

“It’s absolutely a good move for it to be two years. Now I feel like I’ve got my feet under the table. When I started, week six was the A-levels fiasco, and having to deal with that was incredibly difficult. Now I feel ready to take it bolder and bigger.

“FE is one of the areas I really want to go big on now.”

Kennedy and her team have set a target for engaging more FE students as part of their “new vision for education” campaign. Across both FE and HE, they want to mobilise 300,000 students this year. If she is going to galvanise more FE students into political action, then she draws on a formidable experience base of how to do it.