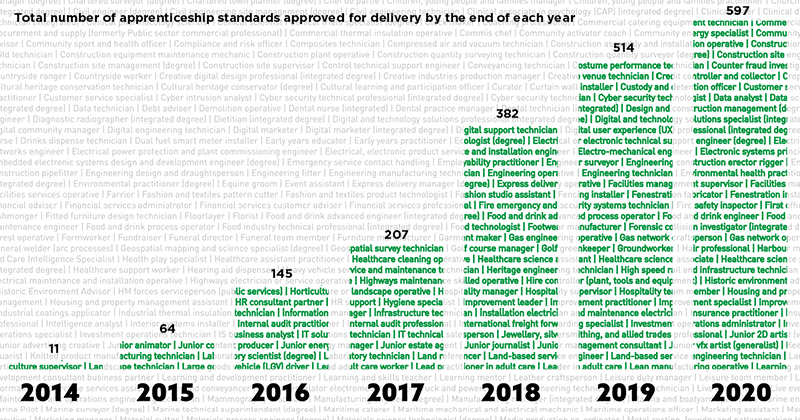 The government has been accused of “losing their way” when it comes to England’s apprenticeships, as the number of standards on offer nears the 600 mark.

Demands have been growing in recent years for the Institute for Apprenticeships and Technical Education to “take stock” and focus on quality rather than quantity, but the pace of standard approvals has doubled since the quango launched its ‘faster and better’ programme of work in 2017.

The number on offer has risen from 300 at that point to 598 as of today. This is twice as many standards approved for delivery compared to Switzerland and Germany – two countries that are often referred to having world-class technical education systems.

Tom Bewick, chief executive of the Federation of Awarding Bodies, said that from a policy point of view, “English apprenticeships have lost their way” compared to the “much clearer” ambition set out in the Richard Review of Apprenticeships back in 2012.

“The plethora of English apprenticeships standards are in contradiction to what the government says about the number of regulated qualifications allegedly causing confusion for employers,” he added, referring to the current level 3 and below review which plans to cut thousands of applied general qualifications that overlap with A-levels and T Levels.

“The institute appears to have gone down the wrong track of allowing anything to be badged as an apprenticeship, provided a group of employers or universities come forward with an occupational role.”

A report by an independent panel on technical education, led by Lord Sainsbury, was published in 2016 and called for a review of “all existing apprenticeship standards” at “the earliest opportunity”.

The IfATE finally launched its first content review of apprenticeship standards in September 2018 – focussing on programmes in the digital “route”. It concluded eight months later and resulted in 12 standards being reduced to nine.

Five other route reviews have since been launched but none of those has finished partly due to the reviews being suspended during the Covid-19 outbreak. They restarted again in September 2020.

Only 43 apprenticeship standards have been “withdrawn” by the institute since its launch, while a further 13 have been “retired”.

Tom Richmond, a former adviser to education ministers and now director of think tank EDSK, published a report last year which claimed £1.2 billion was being wasted on “fake apprenticeships”.

He wasn’t the first person to flag these issues: Ofsted chief inspector Amanda Spielman warned in 2018 that existing graduate schemes were being “rebadged as apprenticeships”, and the National Audit Office reported a year later that “some employers use apprenticeships as a substitute for training and development that they would offer without public funding”.

After hearing that the number of approved standards is almost at 600, Richmond said Lord Sainsbury’s request for low-quality standards and duplicated content to be revised or withdrawn is “plainly not happening on the scale required”.

“Instead of patting themselves on the back for approving a seemingly endless number of standards, the institute should be spending its time sorting out the standards it has already waved through.”

Bewick argued that in “world-class” systems like Germany, the emphasis of standards development is at the industry level, as opposed to the occupational level as we find in England.

Bewick said the IfATE “needs to go back to basics and decide who apprenticeships are for, what they are for and how industry is best galvanised and incentivised to deliver them”.

Jennifer Coupland, chief executive of the Institute for Apprenticeships and Technical Education, defended the number of standards, saying that the employer-led approach to developing new apprenticeships has “driven up quality and is delivering on England’s skills needs”.

She said: “We would like to thank the thousands of employers who have identified training requirements for hundreds of occupations right across the economy, following an all-age and cross-level approach that provides a huge variety of opportunities for people from all backgrounds.

“We are always open to ideas on how we can improve our work but firmly believe that this is the right approach.”

Coupland added: “The cross-sector route review process is also supported by our system of revisions for individual apprenticeships, where an urgent need for an update is identified. We’ve made an active decision with employers to slow the pace of route reviews because of the Covid-19 pandemic. While work is continuing, we are all too aware of the unprecedented challenges that employers involved are facing, so are carefully managing what we ask of them.”

The Department for Education did not respond to requests for comment at the time of going to press.