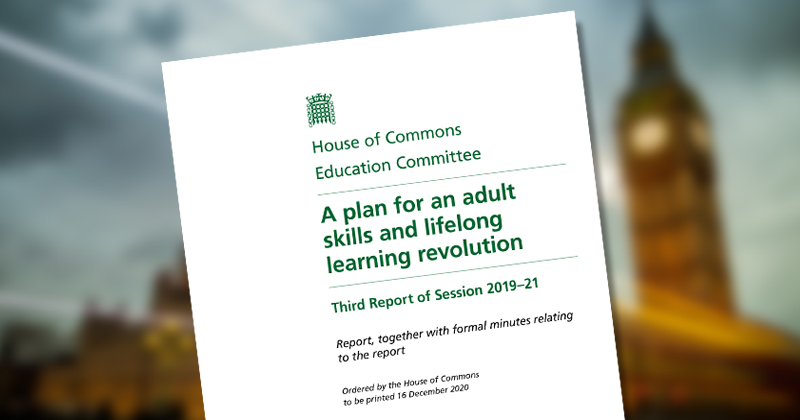 Influential MPs have added their voices to calls for the return of individual learning accounts to help reverse the decline in adult education.

The Commons’ Education Select Committee has today published a report following an inquiry into lifelong learning, in which they learned participation in adult education has dropped to its lowest level in 23 years, while funding fell by almost half between 2008-09 and 2018-19.

One solution the MPs have put forward to “kickstart participation and play a key role in enhancing the employment prospects of adults affected by the Covid-19 pandemic” is the introduction of individual learning accounts (ILAs), despite recognising the idea has become “political kryptonite”.

This makes the MPs the latest in a chorus of voices calling for a return of the accounts – FE Week reported last month how further education and skills sector leaders, as well as policymakers and government advisers, have come round to the idea of handing learners a bank of funding to spend on education and training throughout their lives.

The committee believes ILAs, which they say would be funded through the government’s £2.5 billion National Skills Fund due for roll-out next April, should initially be aimed at groups with low engagement in lifelong learning, including those on low incomes, in a pilot phase.

But ILAs should eventually expand, the report envisions, to a system where all adults receive a one-off grant, then two to three top-up investments throughout their working life, in order to “put purchasing power into the hands of the individual, enabling adults to take control over their learning and skills pathway”.

The great spectre hanging over any introduction of ILAs, however, is their expensive and failed introduction under the Labour government in 2000.

Then-education secretary Estelle Morris pulled the plug on the scheme just a year later after abuse by unscrupulous providers led to a reported £67 million fraud.

“The failures of this scheme have meant that ILAs remain political kryptonite for English policymaking,” today’s report notes. “Yet twenty years on, particularly with advances in technology and digital security, this need no longer be the case.”

The model has since been put into practice in others parts of the UK: including in Scotland, where there are grants of up to £200 for individuals who are looking for work or looking to progress in work to spend on training; and in Wales, where a pilot scheme launched in 2019 targeted priority groups, such as adults in employment earning under £26,000.

Other recommendations from today’s report, titled ‘A plan for an adult skills and lifelong learning revolution’, include a community learning centre in every town, as the providers of such training are the “the jewel in the crown of the nation’s adult education landscape”.

The committee said the Department for Education does not “fully grasp the value and purpose of community learning,” after skills minister Gillian Keegan showed at a hearing an “inability to set out a specific strategy and ambition for community learning”.

So the report calls on department to work out an “ambitious” plan for the centres, which could be set up at “colleges, church halls and libraries,” and must also push for a three-year funding settlement for community learning at the next government spending review, after its budget had been “arbitrarily” capped for ten years.

Like ILAs, skills tax credits are also a favoured policy of the prime minister’s skills and workforce policy advisor Alison Wolf, who told the committee the credits would be a “a very good idea,” if a way of doing it could be figured out which was not “open to massive fraud”.

The three recommendations, along with the introduction of grants for disadvantaged learners to study more part-time higher education courses, make up the committee’s ‘four pillars’ approach, which committee chair Robert Halfon MP (pictured left) says: “Would lay the foundation for a coherent long-term adult education strategy that goes some way to fostering a national culture of lifelong learning and allowing everyone the chance to climb the ladder of opportunity.”

Learning and Work Institute chief executive Stephen Evans, who contributed to the committee inquiry which led to this report, said the recommendations in the “excellent report” could make a “real difference”.

“We’ve long called for a personal learning account to help people retrain and upskill throughout their lives.”

A Department for Education spokesperson, in response to the report, said they will “continue to work with the FE sector to ensure more adults can retrain and upskill so we can unlock even more potential and level up opportunities across the country.

“Our Lifetime Skills Guarantee will make sure everyone has the opportunity to learn and develop the skills they need to succeed at any age,” including through its offer of a free, first, full level 3 qualification for any adult without one. As well as a lifelong loan entitlement “that will make it easier for adults and young people to study more flexibly, which can be used over their lifetime and for modules of a course, as well as full years

The spokesperson continued: “We are investing £1.34 billion in education and skills training for adults through the adult education budget and The Skills Toolkit offers free online courses to help boost digital and numeracy skills that are highly desired by employers.”