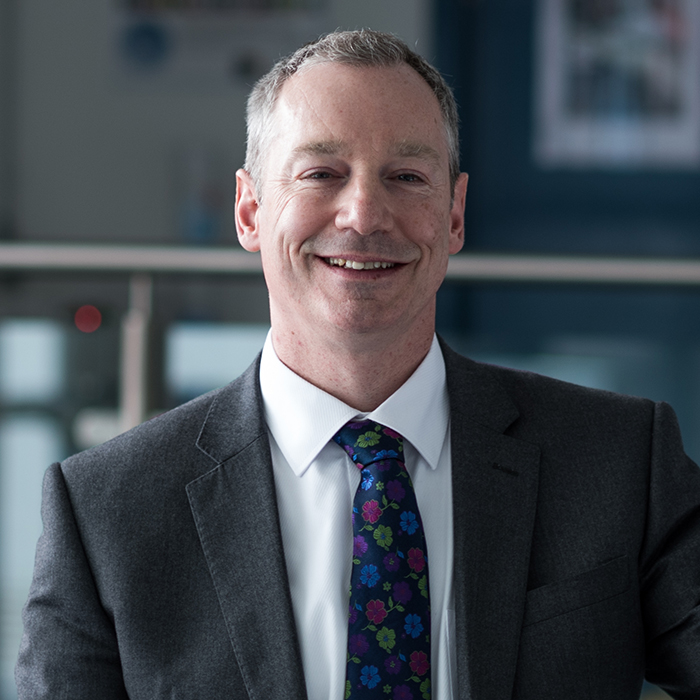 Exeter College has become a magnet for the government. Just over a year ago, Gavin Williamson visited to talk about T levels. He was back again in June, this time virtually, and six weeks ago it was the prime minister’s turn – not just for a photo op, but to deliver a major policy speech on the future of the sector.

Modestly, its principal, John Laramy, says he doesn’t “quite know how it how it came about. Somebody somewhere obviously said ‘Exeter College seem to be doing an OK job’, and off the back of that they came for a visit.”

In truth, it’s no surprise at all. The first general further education college in England, founded in 1869, Exeter College was crowned best college in the country by FE Week two years running in 2016 and 2017 and hasn’t been out of the top five (of 172) in the past four years. It’s been Ofsted ‘good’ since 2008 and ‘outstanding’ since 2014.

Laramy, who will mark 12 years at the college this January, having joined as vice principal in January 2009, has been in its top job for nearly five of those. And one of the features of Johnson’s speech really resonated with him: “Now is the time to end this bogus distinction between FE and HE,” he exclaimed. 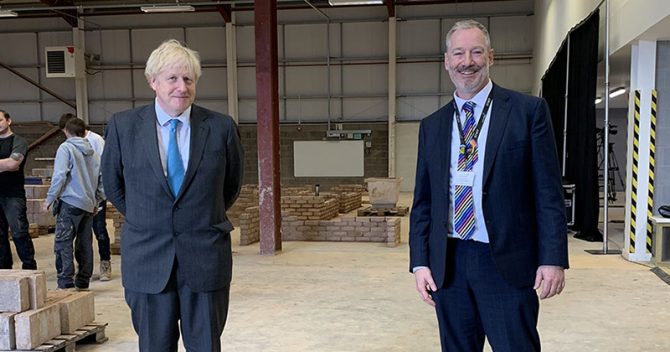 That point alone made Exeter the ideal location for delivering that speech. As Laramy explains: “One of the things we benefit from in Exeter is how the schools, the college and the university all work together. It’s not about competing, it’s about collaborating. And because of that, Exeter scores really well on stats like productivity, and it’s got very low levels of unemployment in normal times. I don’t think it’s an accident.”

Given the economic pressures facing the country, it’s obvious why a recipe with such hearty results is particularly politically palatable. But there are many more reasons why the town and its college exemplify so well the government’s vision for education. Exeter College’s apprenticeships provision is noteworthy. Its collaboration with the University of Exeter extends to their co-running of Exeter Maths School – a darling project of this government, which Williamson has pledged would eventually reach every region. It has embraced T levels as one of its early adopters. And its facilities are second to none. But it has also been held back by disinvestment.

“We need to invest in skills, and we need to invest in FE,” said Johnson on his visit, after beaming about spending a part of the morning sampling Exeter’s “awesome” facilities with the students. “Let us begin by admitting that part of the problem is that not every FE college is as superb as Exeter College.”

But the truth is that not even every part of Exeter College is as “awesome” as the one he visited. And leaky ceilings are a characteristic understatement by the PM of the problems facing the college estate nationally.

In its last report, Ofsted called Exeter College’s facilities “exceptional”, but among its many sites around the town the one that could be expected to be its showpiece – the Hele Road town centre site, whose tower block, built in 1963, is the third tallest building in town – is increasingly inoperable. It will cost an estimated £70 million to knock it down and build new accommodation. “The legacy accommodation is one of my top challenges at the minute. This year, we’re hiring three rooms – meeting rooms in a hotel – because Exeter College isn’t able to accommodate the students who want to study here.” 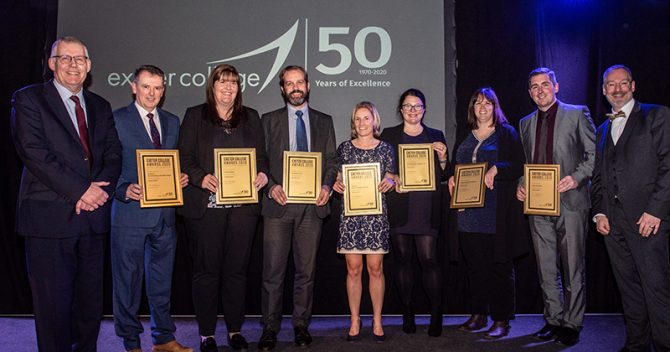 Despite the funding announcement, there is little clarity about how it will be allocated and what the expected standards will be. But the college’s need is so great that it can’t afford to wait. “I’m quite hopeful,” says Laramy, “but we’ve taken quite a risk by developing quite a detailed plan without the funding to support the build.”

And that’s not all. “My second biggest challenge is the funding reductions that we’ve seen over the past ten years. It has slightly improved this year. But it’s still not a point where, you know, we don’t want to employ OK teachers, we want to employ brilliant teachers. And for that, particularly the technical areas, you need to match what the market pays for things like engineering, aerospace, construction and digital programming.”

Given these acute challenges, Laramy’s past makes him a conspicuously serendipitous appointment. For starters, he’s from Devon and has only left the area for a year to do his PGCE at the University of Greenwich. “That was my year in the big smoke,” he muses. He was raised as an only child on the family’s farm, which kept both of his parents occupied. The family no longer own the farm, but his memory of it is rather idyllic.

And he might still be there today, were it not that he was unable to start working there at 16. Instead, he joined the construction industry. Every leader I’ve interviewed manages to find a link between their previous career and education – some more tenuous than others. In Laramy’s case, ten years in construction is apposite. It may well explain the trust that Exeter’s governing body has placed in his strategy of developing plans for a major re-development “on spec”.

Yet his practical knowledge isn’t the aspect of the industry he himself singles out as relevant. “Construction is a people business. It’s about getting a team to coalesce around a vision of what you want to achieve. You could be the best construction manager in the country, but if the painters the plumbers, the carpenters, the bricklayers aren’t great, trained professionals, you won’t get a great building. I can be the best leader in the country, but if the teachers at the college aren’t brilliant, the students won’t get a great experience.” So with his BSc in construction management, when it comes to that second challenge of recruiting and retaining excellent teachers, it looks like he is well qualified too. 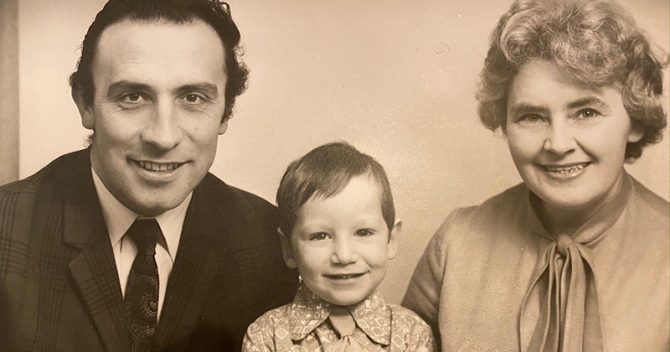 It won’t hurt either that he is highly personable. Of his school experience, he offers only that “I was the kid who had in all my school reports ‘John’s bright but can’t be bothered’” – testament perhaps to being a “people person” from the start, but testament also to an upbringing that valued practical work at least as much as its academic counterpart. Of pressure to go to university, for example, he says: “Honestly, it wasn’t part of my upbringing.”

In many ways, his experience confirms the line the prime minister seems to be following with his education strategy. Laramy holds a HNC in construction – from Exeter College, no less – as well as his “foreman’s book”, but also his BSc and a master’s in educational leadership, not to mention his teaching qualification. “I’ve benefited because I’ve had the university experience but I’ve done those part time,” he says.

He has worked throughout, accumulating knowledge and experiences of a practical and academic nature simultaneously. A karate enthusiast, he discovered through the marital art that he enjoyed teaching the younger members. “And then at 26 I just thought, actually, I could do this for ever or I could do something different. I’ve tried to have the ethos that you don’t regret things you’ve done, only the things you haven’t done.” So he sold his sports car – a Volkswagen Corrado – and invested the proceeds in teacher training. His first job came at North Devon College (now part of PETROC), where he stayed a decade, eventually becoming its head of curriculum.

Particularly in technical areas, you need to match market pay

In essence, Laramy’s career gives the lie to more than the “bogus” distinction between FE and HE. It shows that the idea of a linear progression, a single-track or single-industry career, is also suspect. But so is flexibility without foundations. A sense of place and a sense of agency and direction also matter.

So much for the individual, but as Laramy makes clear – no doubt based on his construction experience here too – you get what you pay for. That goes for buildings, and it goes for staffing them too. “You can’t build a system where the plumbing teacher is paid less than the plumber,” he tells me.

Even with greater investment, there are limits to modelling a national policy on Exeter. Laramy is right to praise the collaboration between education institutions in the town, but it’s hard to envisage how that could translate to larger conurbations where students have a choice of multiple FE providers. Collaboration means something very different to The Manchester College principal, Lisa O’loughlin, for example.

One thing’s for certain though: when it comes to building back better, the government have chosen the right place and the right person to visit for advice.