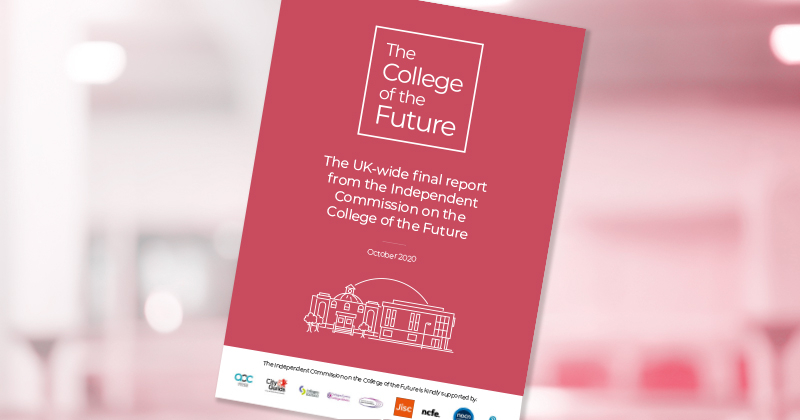 The government should introduce a duty on colleges to deliver an education offer aligned to employer needs, a commission of leading FE figures have said.

But the report does not explain how this duty would be enforced, and does not go as far as a report by think tank EDSK from September, which said colleges ought to be stripped of its decision-making powers over provision, which EDSK say should be handed to new, local FE directors, who would arrange college provision “in line with local social and economic needs”.

The final UK-wide report from the Independent Commission on the College of the Future, titled ‘The College of the Future’, instead says the UK’s governments should introduce national strategies, which would provide a “flexible” framework for colleges to “support the development of the whole workforce, as well as initial education opportunities for everyone”.

College strategies must identify local and regional priorities and be developed with employers and other stakeholders, especially other providers, the report continues.

Aligned to factors such as local industrial structure and employment needs, these strategies will deliver “a coordinated approach to the learning and training offer”.

Employer hubs, focused on a specific sector or set of skills, should also be established at colleges, with providers playing an expanded role in business support.

The call for colleges’ provision to be more closely aligned to employers’ needs has fast become one of the major discussion points in the FE sector.

It is expected the government’s upcoming FE white paper will include measures to give employers a greater say over the provision run by their local college.

The Department for Education has already launched a Skills and Productivity Board, which they say will provide expert advice on how to make sure courses and qualifications are aligned to skills employers need.

Universities, schools, independent training providers and adult community learning providers should also be bound by government to collaborate with colleges, the report adds.

It also calls for three-year block grant funding for colleges, and a ‘Skills Guarantee’ offering free training for employees, including those at level 4.

The commission has been assembled by the Four Nations College Alliance, a group of college leaders, representative bodies and officials from across England, Scotland, Wales and Northern Ireland.

The commission was launched in March 2019 with members drawn from across the UK, with a mission to answer: ‘what do we want and need from colleges from 2030 onwards, and how do we get there?’

The commission has been heavily supported by the Association of Colleges, one of its supporting organisations, which has provided a base for its secretarial staff and the use of infrastructure, including IT servers.

Melton said “urgent” action is needed to take forward the commission’s recommendations, with the reforms to the system colleges operate in “top of the agenda”.

“The days of forcing colleges to compete are numbered,” she said, “and people across the English sector recognise what we need now is a coherent, connected education and skills system to deliver for our communities”.

The much-anticipated FE white paper, due to be published by the government later this year, “represents a phenomenal opportunity to take forward these reforms,” Melton added.

Association of Colleges chief executive David Hughes said the report was “a positive vision which challenges governments, employers and colleges themselves to build a new system which works better for us all”.

“Colleges do a great job now, but this report shows that with the right policy, funding and regulation they can deliver so much more.”

The commission also wants to more diversity in college leadership, saying colleges must be led by those “who reflect the communities within which they are based and the students they serve”.

“There is a particular challenge too,” the report reads, “in the lack of data collected on representation across executive and non-executive leadership”.

“This must be addressed as a point of real urgency.”

Skills minister Gillian Keegan has said she is “committed” to a new, mandatory annual data collection in FE, covering workforce characteristics including ethnicity.

The three-year block grant funding, the commission says, would “ensure colleges can take a long-term strategic focus and reinforce strategic investment”, and should be based on “high-level strategic” outcome agreements.

The commission also proposes a statutory entitlement for adults to study up to level 3. Prime minister Boris Johnson announced last month the government would fund adults aged over 23 to complete a first, full level 3 qualification, as part of the Lifetime Skills Guarantee.

Education secretary Gavin Williamson welcomed the report, saying the white paper will “ensure our colleges are at the heart of every community so we can unlock even more potential and level up skills and opportunities across the county”.

Reports for each of the four nations, covering specific recommendations relevant to their individual circumstances, will be published later this year.

The commissioners will then decide if there are any subsequent steps they can take, but it is unclear if the commission will come to an end this year.