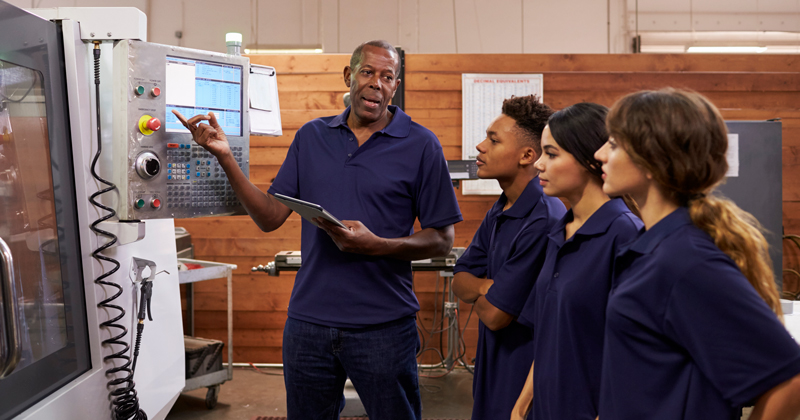 Government efforts to increase apprenticeship take-up by black, Asian and minority ethnic young people have been slammed as a “national disgrace”.

New FE Week analysis shows that the proportion of BAME 16- to 18-year-old apprentices is falling and made up just 7.7 per cent of starts in the first three-quarters of 2019/20, compared to over 20 per cent for other further education courses.

City of Bristol College principal Andy Forbes, who co-founded the former BAME Principals Group, said the under-representation of BAME apprentices at all levels and in most sectors is a “long-standing issue”.

“The fact that we have made so little progress in addressing it is a national disgrace,” he added. 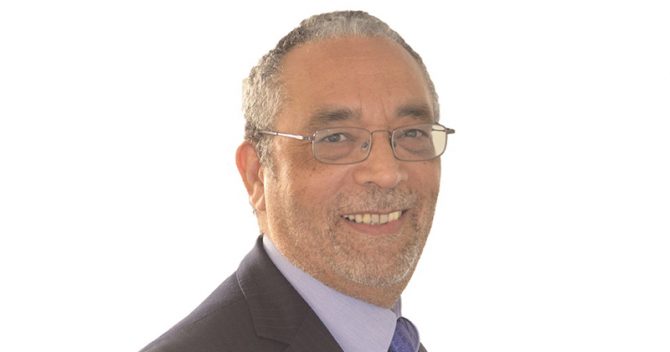 The analysis comes after the Department for Education claimed 12.5 per cent of all age apprentice starts were BAME in 2018/19, exceeding their target of 11.9 per cent.

One of the government’s leading initiatives to boost BAME participation, the Apprenticeship Diversity Champions Network, has not met since February, as meetings were paused by the pandemic.

Meanwhile, funding for the 5 Cities Project, which aimed to use local authorities to drive up BAME starts, ended this month with no renewal. 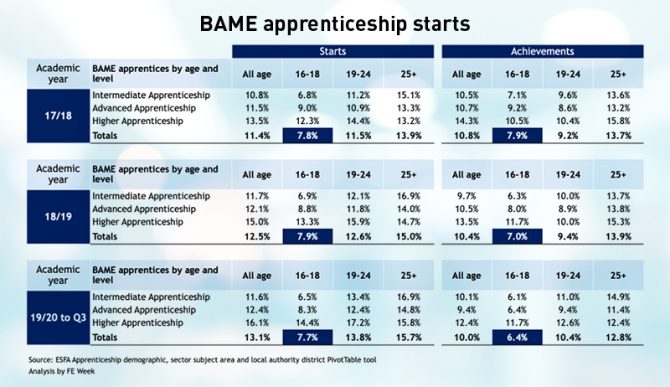 On the lack of BAME apprentices, the spokesperson insisted the department is “very keen to increase awareness of apprenticeship opportunities” so they have been reviewing advice and guidance and using their Apprentice Support and Knowledge service to target schools in high BAME population areas.

“We have also ensured that young BAME role models are visible in campaigns such as ‘Fire It Up’, and that we are hearing the voices of young apprentices (including BAME) through apprentice networks such as the Young Apprentice Ambassador Network, and the Apprentice Panel.”

Forbes said that in his experience, most modern businesses are keen to recruit a more diverse workforce.

The problem is “simply that not enough is being done to talk to young people – and crucially to their parents – about the advantages and value of apprenticeships.

“This has to be done on the ground and face to face, not through glossy advertising campaigns.”

Forbes called for a “step change” from the Department for Education and the Institute for Apprenticeships and Technical Education, which was criticised last week for having no BAME representation on its board.

The IfATE’s indicators of a quality apprenticeship do not include improving diversity, but a spokesperson said they are “committed to playing a full part” in improving BAME participation in apprenticeships.

“Going forward, we will continue work on the manner in which apprenticeships and technical education qualifications are issued to ensure they are equally accessible to all communities and that we continue to promote wide participation by all groups in the work of the institute.” 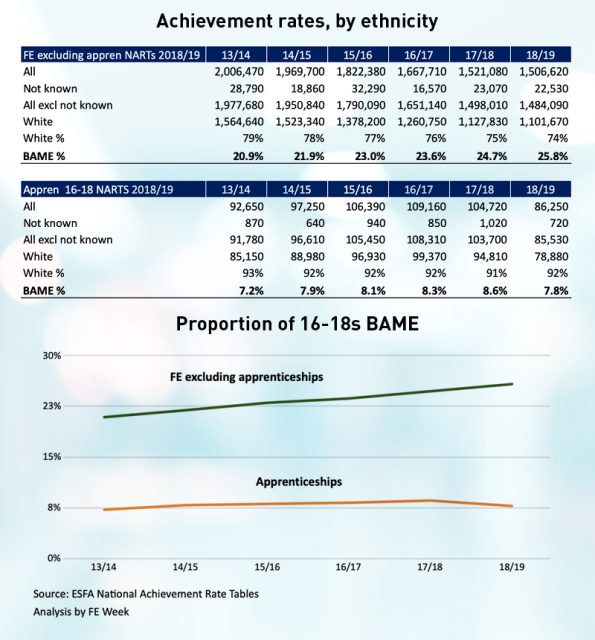 Jeremy Crook, chief executive of the Black Training and Enterprise Group, a charity that runs courses on diversity in the workplace and compiles statistics on ethnic minority groups, said the lack of BAME apprentices “extremely concerning”.

Crook added that “progress on increasing BAME participation in apprenticeships has been disappointingly slow” and urged the DfE to create a “targeted plan to open pipelines to employers that still have opportunities”.

One of the initiatives the DfE has been using to try and increase BAME participation in training is the Apprenticeships Diversity Champions Network.

The network of 80 leaders from across different sectors of industry is intended to “champion apprenticeships and diversity amongst employers and encourages more people from under-represented groups to consider apprenticeships”.

One of the champions is Jill Whittaker, managing director of apprenticeship provider HIT Training, who told FE Week: “The key thing the network has been trying to do is generating ideas and sharing best practice.

“There are some very big employers who have done some really far-reaching programmes, so to be able to share that expertise is very valuable.”

One of the lessons learned led HIT to include a more diverse array of people in its marketing materials after an engineering degree apprentice told Whittaker: “You don’t see people like me doing that kind of job.”

She added that the government is looking to resume meetings of the network in the next few weeks.

BAME representative groups in the FE and skills sector independent of government have begun to regenerate after a number of them – including the BAME Principals Group – shut down several years ago.

These new groups include the Association of Colleges’ Equality, Diversity and Inclusion steering group, and the Black FE Leadership Group (BFELG).

In reply to a letter from BFELG last month, skills minister Gillian Keegan said it was their “ambition for our FE providers to offer an inclusive, welcoming environment for students, teachers and leaders from all backgrounds”.

She also spoke of how she was “committed to our new mandatory annual data collection in FE, which will uncover the full range of characteristics of the workforce, including ethnicity” from summer 2021. 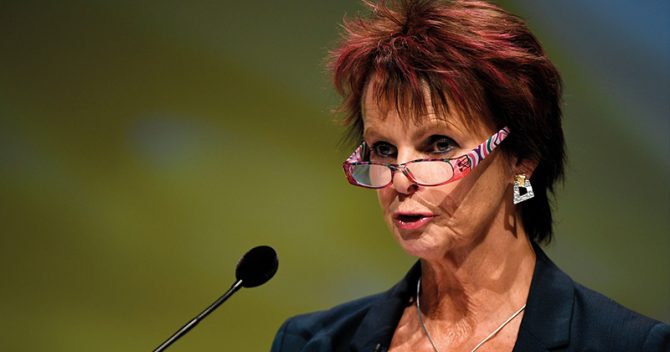 Someone with intimate knowledge of what the DfE has done to improve BAME participation in apprenticeships is former skills minister Anne Milton (pictured).

She said when she was in office “we knew there was a problem”, and she has impressed upon her former department the importance of working quickly, saying: “This is urgent stuff.”

Its aim was to improve apprenticeship diversity in their area, and although latest figures from the five has shown the proportion of BAME apprentices has risen over the past few years, the authorities pointed out apprenticeship starts nationally have dropped, which has meant the number of people from BAME backgrounds starting apprenticeships has not necessarily risen.

Funding for the project has now come to an end, but the authorities have pledged to continue attempting to improve BAME apprenticeship participation.

The Greater Birmingham and Solihull LEP has said it will be launching a marketing campaign aimed at BAME-owned businesses to highlight the benefits of apprenticeships.

The 5 Cities Project has been received warmly by BAME leaders, with Crook saying his organisation wants to see the project “continued and enhanced with better funding”.

The DfE spokesperson said: “The lessons learned from this partnership are helping to inform how we shape policy, and what interventions have more impact.”

Mutlib spoke favourably of the government’s actions to increase participation, saying the Fire It Up campaign featured a diverse array of apprentices.

For all the data from FE Week analysis click here: http://lsect.co.uk/wp-content/uploads/2020/10/Appren-ethinicity.xlsx