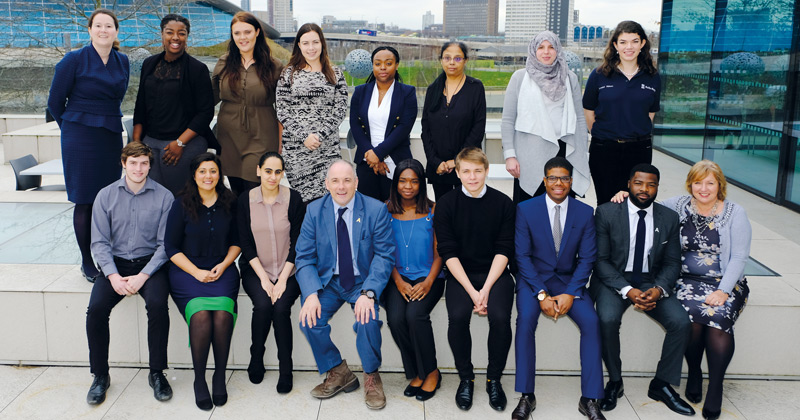 The government launched the Apprenticeship Diversity Champions Network this week. One of its key aims will be to increase the proportion of apprentices from black, Asian and minority ethnic communities by 20 per cent. FE Week’s Alix Robertson went along to the opening event to find out more.

A new employers’ network designed to promote diversity in apprenticeships was launched this week, and it’s put good practice and dispelling myths at the top of its list of priorities.

The Apprenticeship Diversity Champions Network is chaired by Nus Ghani, MP for Wealden, and is made up of 23 employers, including Rolls Royce, the BBC and BAE Systems, alongside other small- and medium-sized employers.

One major focus for the new group will be to help the government achieve its commitment to “increase the proportion of apprenticeship starts by people from BAME backgrounds by 20 per cent by 2020”, which was first spelled out in a document called ‘English Apprenticeships: Our 2020 Vision’, published last December.

FE Week asked the Department for Education to put this target into context ahead of the launch event, at Queen Elizabeth Olympic Park in London.

A spokesperson said that the aim would be to increase the proportion of BAME starts from just under 10 per cent at present to 11.9 per cent (which amounts to a 20 per cent increase). The DfE would not confirm where the original 10 per cent figure was taken from.

According to our analysis of the latest available statistics, the problem of BAME underrepresentation in apprenticeships appears to lie more in recruitment than in attracting candidates.

We put this to the apprenticeships and skills minister Robert Halfon at the launch, to find out what he and the network were going to do to drive change. Halfon with Nusrat Ghani, chair of the Apprenticeship Diversity Network

“The ‘Get in Go Far’ apprenticeships promotion campaign is hugely important because it is being shown on social media, on TV, on radio, and in cinemas and it is not just about encouraging people to do apprenticeships, but encouraging employers in terms of recruitment,” he said.

“The diversity network is something very serious because when you have someone like Nus as the ambassador, and you see companies like Balfour Beatty or Rolls Royce successfully employing significant numbers of BAME individuals, then the culture will change.”

He also claimed that schools had to share some of the blame for underrepresentation from BAME groups, saying: “We’ll only achieve this if schools do a lot more to encourage apprenticeships and skills and at the moment they do not.”

Ms Ghani told FE Week that the effort was “also about convincing the parents”.

She added: “We have to make parents understand that this is a solid step to their child not only learning but earning and opening up their opportunities and their career going forward.”

This particular problem was picked out by Mr Halfon during his speech at the launch.

“Sometimes I meet families from different black and minority ethnic backgrounds and they say to me that they just want their kids to go to university, because that is seen as the prestigious route.”

Cultural preconceptions were also raised in speeches made by apprentices at the event.

One of them, Chris Achiampong, a degree-level apprentice with IBM, told his story of growing up on a council estate and being signed by Arsenal football team – but having to give up his dream after a bad injury.

When I first said to my mum that I wasn’t going to university … her heart nearly exploded, she was going crazy

He has subsequently become one of the faces of ‘Get In Go Far’.

“I’m from a Ghanian household,” he said. “My mum came to the UK for a better life and lived in what you would call deprived circumstances. She was a single parent and she believed in the power of education and academic achievement.”

Chris explained that after leaving football he had won a place at Loughborough University to study economics, but declined it in favour of an apprenticeship.

“When I first said to my mum that I wasn’t going to university … her heart nearly exploded, she was going crazy,” he said.

However, he added: “I took her into the offices and she saw everyone else in their suits and she said ‘ok, I can see my boy here’. Now she’s telling all her friends.”

The work of the new Apprenticeship Diversity Champions Network is not only focused on improving BAME representation – it will also aim to boost the number of female apprentices and those with disabilities.

Mr Halfon spoke passionately to FE Week about how he hopes the network will widen access to apprenticeships for people with disabilities, by tackling simple day-to-day challenges as well as addressing the bigger picture.

Mr Halfon himself was born with mild cerebral palsy and developed osteoarthritis partly due to undergoing many operations to treat it.

He gave an example of meeting with the Guide Dogs for the Blind Association.

“One of the problems they have is with apprentices not being able to get there because the bus is so troublesome,” he said.

“People think of macro government initiatives, but something as simple as talking buses can help people who have eyesight difficulties to cope with the logistics.”

He also highlighted the importance of sharing positive examples, saying: “I very much want ‘Get In Go Far’ to feature a disabled person, and that doesn’t just mean the stereotype of a disabled person in a wheelchair, I want people with autism to have access to apprenticeship too and others.”

The network will also look at the lack of women in science, technology, engineering, and mathematics.

“Jaguar Land Rover is working with Warwick College, and setting a great example with I think around 20 per cent of its apprentices being women. If they can do it, why can’t everybody else?” asked Mr Halfon.

“Again, unfortunately this goes right back – not just to secondary school, but primary school. A huge cultural shift is required.”